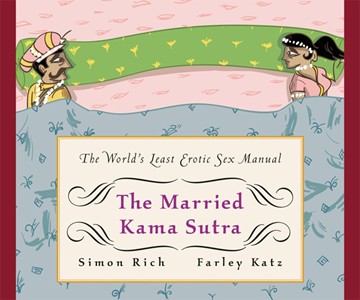 Crap. The Married Kama Sutra sounds awful. Like a preparatory manual for decades of boredom and complacency and prescription meds. But it doesn't have to happen, people! 100% prevention is out there! It can be achieved!

It is called "the abstinence."

Muchas danke to The Awesomer.

Jeff McWhinney designs wedding rings for men who move. Like a little more than from their desk to the john, the car to the house, and the couch to the fridge. Hikers, golfers, climbers, weight lifters, even really intense...

Spooky season is coming up, and these Inflatable Skeleton Lovers - the Boning Bones, if you will - are the perfect front yard decoration to, er, erect if you want to offend and piss off the Karens in your neighborhood...

The Lovers' Embrace Coffee Table, or, as I like to call it, the Sexy Time Coffee Table, has no known artist, date, or origin. At least not that its seller, Furnish Me Vintage, is aware of. Best guess is that the massive...

Remember that one time you let some chick drag you to hot yoga because she too was hot and you wanted to see her do bendy things in spandex pants, but then you ended up spending the whole class lying on your back trying...

A heads up to politicians and city planners: stop wasting your money on bike lanes, tax incentives, and PSA campaigns. All you need do to persuade your constituents to trade in cars for bicycles on their morning commute...