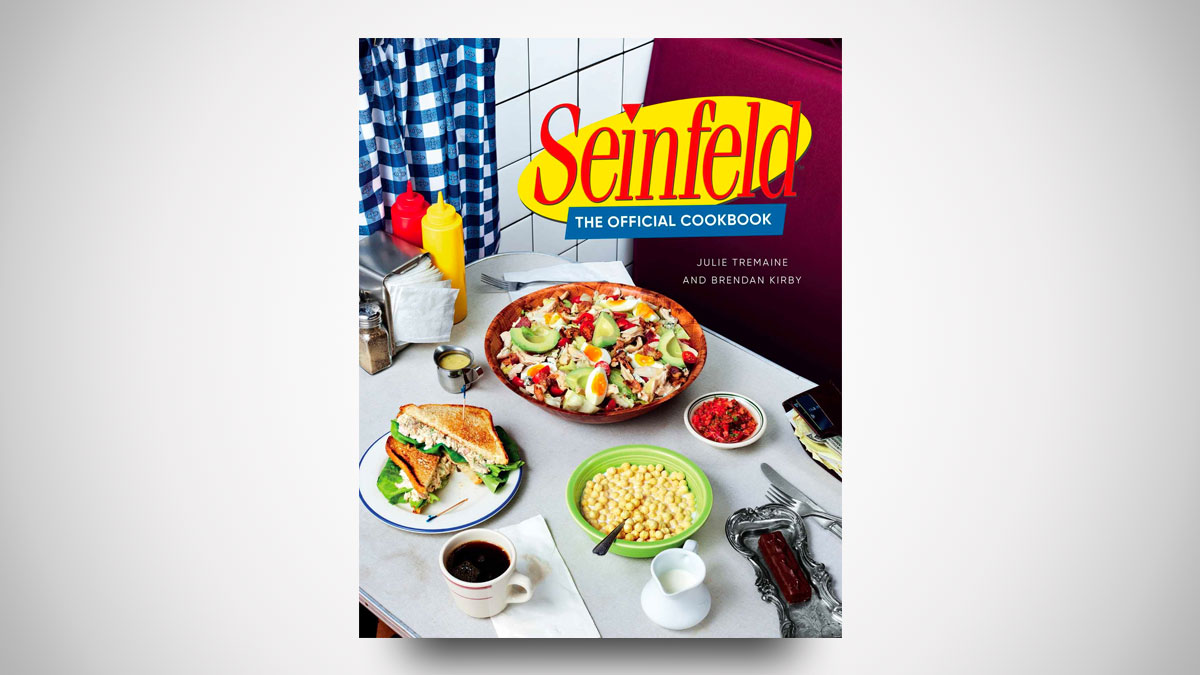 Not even looking at the blurb before I write this: if they want to call it Seinfeld: The Official Cookbook, there better be recipes for a big salad, a chocolate babka, a marble rye, and some motherf'ing soup inside.

Seinfeld: The Official Cookbook is the first ever official Seinfeld cookbook, which is both surprising since so many of the episodes had running themes of food, and also not surprising since a lot of the food Jerry, George, Elaine, and Kramer discussed doesn't lend itself well to cookbook recipes for the home cook. (See aforementioned babka and rye.) The description says Seinfeld: The Official Cookbook brings to life and stovetops over 60 recipes from the show, but doesn't list any of them. And the photos of the book - which is full-color, with tons of photos and extras, and looks very nice by the way - include just four: Black-and-White Cookies; Elaine's Muffin Tops; Long Wait Lo Mein; and The Butter Shave Turkey. The last complete with a photo of Kramer with his oven-roasted head sticking out of the bird.

At printing, fans of the 90s sitcom could pre-order Seinfeld: The Official Cookbook, which will be officially released on October 11, 2022.

The original photobomb, credited to George Costanza on Seinfeld Season 9, Episode 7, "The Slicer," can now be yours. And not just yours in the hand, but yours in the face too! Shop Cafe Disco will personalize the iconic...

At printing, this Seinfeld 30th Anniversary LEGO Set was just a LEGO Ideas project from Brent Waller with 700+ supporters. Meaning it needs around 9,300 more supporters before LEGO will consider turning Jerry Seinfeld's...

Seinfeld - The Video Game About Nothing

Seinfeld Adventure, despite looking like a pixel-populated resurgence of a game from the 90s, is a video game about nothing that really is nothing. For now. But with the help of the internet - us - creators Jacob Janerka...

Now you have two options for giving the Gift of Nothing. This one in a box, and this one in a book. Seinfeldia: How a Show About Nothing Changed Everything tells the story of what some say is the best, and others the...

The Mensch on a Bench

Twenty years later, The Mensch on a Bench picks up where Adam Sandler's "The Hanukkah Song" left off: he's bringing "more Funukkah to Hanukkah," and bringing the families celebrating it closer together in the process...

Honestly, The Christmas Movie Cookbook doesn't appear to have many recipes I'll actually want to make - or even request my mama make for me. Old Fashioned Meatloaf from A Christmas Story? Chicken, Broccoli, and Cheddar...

The Garbage Pail Kids Cookbook is on its way to win the hearts and destroy the kitchens of all the Messy Jesses and Messy Tessies out there. I believe the 35+ recipes it contains are even edible!...

Natural Harvest: A Collection of Semen-Based Recipes by Paul "Fotie" Photenhauer serves as a reminder to be careful what you wish for. For example, if a dude asks what you want for dessert, consider a plate of Creamy...

Hope you like chimichangas. Or at least, like Deadpool himself, saying the word because Cooking with Deadpool is a cookbook filled exclusively with recipes for chimichangas...

Do the DEW-BQ. Do the DEW-infusion. Do the FruDEWtcake. MTN DEW CODE RED Brisket, MTN DEW LIVEWIRE Brined Turkey, and MTN DEW Cherry and Cranberry Pomegranate Fruitcake are just some of the dozens of odd, though not altogether...

Good thing Shia La Beouf spent 25 hours in a New York City jail for acting like an asshat at a Broadway musical a couple years ago, or else the world may never have had Prison Ramen: Recipes and Stories from Behind Bars...