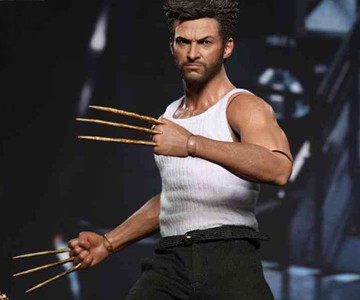 Whoa, the sixth scale collectible figure of Wolverine as portrayed by Hugh Jackman might look more like Hugh Jackman portraying Wolverine than Hugh Jackman himself. Head sculptor and painter Lee So Young and JC Hong should be given high-paying jobs designing RealDolls. I'll take the circa 1992 Cindy Crawford version, please.

A movie-accurate representation of Jackman in The Wolverine, Hot Toys' 12" tall action figure has over 30 points of articulation for battling the Silver Samurai and encroaching lap dogs. Five pairs of interchangeable palms include fists with both metal and bone claws, a pair of empty fists, a pair of relaxed palms, and a pair of palms designed to hold the included engraved metal Japanese sword and sheath.

A Crotch Staring Cat with swappable crotch parts? Being a reluctant, yet attentive, cat owner, I can say this toy from Chinese cartoonist QianLi Ma is not based on real life. At least not in my experience. Now a Crotch...

Just when you thought your Cup Noodles and microwave Ramen couldn't get any sexier, the geniuses at the Japanese brand FuRyu went and made this series of instant noodle lid stopper figurines. The ladies range in appearance...

I don't know if the Pantera Claw looks cooler than the Wolverine-esque claw we previously showed you--I should have had the forethought to consult on this topic with the bearded grandmaster modeling the latter version--but...

LEGO my head! Your personalized LEGO minifigure awaits, at least from the neck up, courtesy of your submitted photos and Funky 3D Faces' 3D printing skills. The Etsy shop will transform any man, woman, or child submitted...

After I saw Jurassic Park as a kid, I thought Dr. Ian Malcolm, and by proxy Jeff Goldblum, was The Man. Then I saw him on Hot Ones last season, eating vegan chicken wings and talking about how his voice doctor said he...

The Tot! Yet another precious name for The Mandalorian's Baby Yoda / The Child / Grogu. And joining The Tot in this latest piece of Star Wars Potato Head merch: Mando himself as The Yamdalorian...

Outstanding. Not just that it's a life-size Mark 42 statue from Iron Man 3, but that whomever forged it deemed "life-size" to mean "Robert Downey Jr.-size", which is actually more like garden gnome-size. Good thing Iron...

I had forgotten I started working on this Hannibal Lecter Action Figure post and left my computer for a few hours to eat some sloppy joes and self-serve fro yo, and when I came back I was looking right into the muzzled...

I see your face on a wedding cake topper, and raise you your face on a Joker action figure. Have people always complimented your Batman-esque jawline? Admired your Superman benevolence? Bowed to your biting Joker wit?...