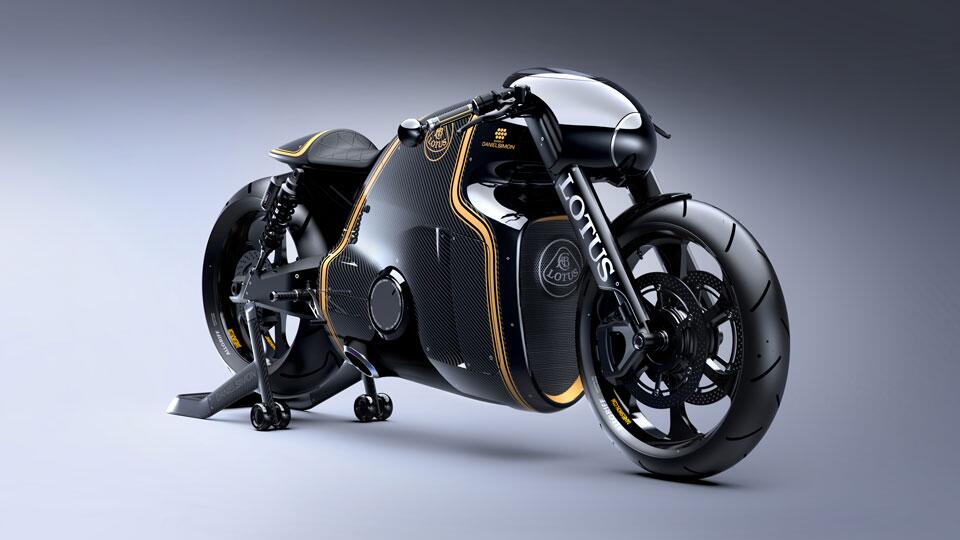 The C-01 superbike: guts by Lotus, skin by Holzer, body by Tron. Lotus' new lightweight motorcycle represents a collaboration of people who know what the hell they're doing. The British auto company's limited edition bike will surge along a mere 100 lucky SOBs straddled atop its 395-pound, 200 hp, 75-degree v-twin Rotax motor molded around the geometry and construction of Germany's Holzer Group. Holzer has designed multiple Moto One and Moto Two world championship motorcycles, plus cars for Formula One and LMP2. But the ultimate coup from a company better known for luxury on 4 wheels: the Lotus C-01's bodywork comes courtesy of Daniel Simon, the man who created the Light Cycle for Tron: Legacy. So if you're still bummed street legal Light Cycles are no longer available for purchase, just stop by Lotus and pick up a C-01. I bet it will cheer you up.

According Dr. Colin Kolles (of Kodewa, and another top-billed Lotus motorcycle designer) the C-01 signifies "a piece of art in motion." The team's goal was to bring style to function, rather than sacrifice the latter for it. A decent idea as, admittedly, aesthetics over performance is likely what any dude sprawled on his belly, arms overhead, ass in the air would experience darting around town on a Light Cycle. So despite introducing British class and elegance, plus some retro glamor, the Lotus release aims to maintain core state-of-the-art motorcycle technology and racing maneuverability. Inspiration for the bike's curves stem from the Lotus 49, while its color schemes give a nod to iconic Lotus racing combos.

Sick in the Head: The 10 Coolest Motorcycle Helmets

Yeah, it costs more than twice the country's 2011 median income, but two little words make it worth every penny: Street. Legal. If you can convince the bank, or your mom, to spot you the cash, a living, breathing replica...

Ever wanted to pop a perpetual wheelie? Well get ready, 'cause RYNO Motors is in production and set for the 2012 US release of two tiers of its self-balancing, single-wheeled, shit-stirring beast of a motorcycle. OK...

Universal mounting rack. Three gallons of fuel. In critical times, Motoped's Survival Bike puts escape in the hands of your feet. The military-inspired superhauler has a back rack assembly primed for multiple bolt-on...

A Texas-sized hog made in southwest Germany. Leonhardt Manufacturing's Gunbus 410 owns the current title of World's Biggest (Running) Motorcycle. That means you can really own and operate the steel-and-aluminum behemoth...

The Hoverbike is what happens when one really wants to be a superhero, but really needs to figure out a way to more efficiently herd cattle. Aussie Chris Malloy has created a prototype for this motorcycle-helicopter hybrid...

If you're not lucky enough to be selected by Skully to beta test their HUD motorcycle helmet, you might consider joining the line to own the NUVIZ take on motorcycle Head-Up Display. The NUVIZ Ride:HUD, a joint venture...

Technically, Dodge debuted its Tomahawk, a motorcycle with 4 wheels, a Dodge Viper engine, and top speed capabilities of 420 mph, a decade ago at the 2003 North American International Auto Show in Detroit. Really though...

You might have seen Daryl Dixon riding around your TV on a Classified Moto build. And like their Walking Dead Motorcycle, the company's BW650 is a stylized, sick, and even sexy beast...

UD Replicas makes some sick motorcycle suits, agreed? But although many send happy rushes of dopamine through our bodies during viewing, actually wearing them for anything but Halloween or Comic-Con could come across...

He is the first Avenger. An unparalleled patriot whose loyalty, stealth, and shredded abs have kept America safe from the likes of Doctor Faustus, Viper, and HYDRA since 1941. And now, motorcycle-riding superhero devotees...