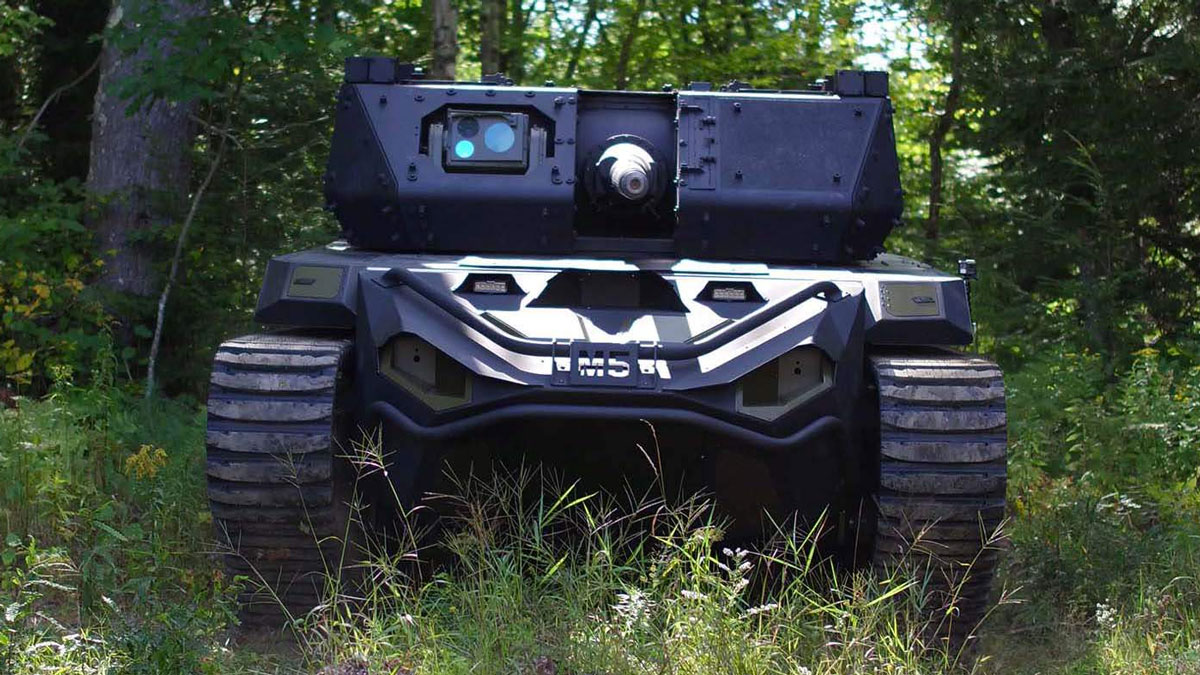 Sorry to all the Veruca Salts out there, but you can't have a Ripsaw M5 Robotic Combat Vehicle or an Oompa Loompa. Willy Wonka and the US Military say no.

Debuting at the 2019 AUSA (Association of the United States Army) Annual Meeting & Exposition in Washington D.C., the Ripsaw M5 is a machine piloted by machines. The M5 is the 5th in the Ripsaw series, and this newest model of RCV isn't just quick, agile, and silent in operation, it's all those things without a human driver sitting at its wheel. The Textron Systems tank operates under robotic control and interfaces, controlled from a remote location. It is the product of subsidiary Howe & Howe's purpose-built vehicular components and FLIR Systems' intelligent sensors and unmanned assets.

The former consist of scalable / configurable armor, suspension, and final drives, and all-terrain capabilities at speeds of up to 40 MPH.

The latter include: cameras that send 360-degree situational awareness to surveillance gimbals; tethered drones the Ripsaw M5 can deploy for further surveillance and, mapping, and to find its own route; and additional deployable ground robots.

The Ripsaw M6 RCV is also modular to suit various types of missions, with options for adding a medium caliber cannon, CROWS-Javelin missile configuration, mine-clearing line charge, and mine plow.

Who wants to come out and play with me, my paintball guns, and my colossal FV432 Armored Personnel Carrier? Armourgeddon, based out of Leicestershire, England (sorry, US of A) hosts extreme paintball experiences headlined...

ARQUUS debuted its Scarabee, an armored 4x4 military vehicle built with both traditional and EV technology, at the Summer 2019 Paris Air Show. There attendees got a look at what ARQUUS calls the first ever "natively hybrid"...

Lotta bottles of Dasani it's gonna take to fill one of WaterPrepared's 160-gallon Emergency Water Storage Tanks. And don't even get me started on how many grocery store shelves I'll have to clear out if my mama decides...

Tank camp? Oh boy, I've been looking for an excuse to go to Kasota, Minnesota! The Drive a Tank family owns and operates this adrenaline-jacking experience 90 minutes outside of Minneapolis, during which participants...

If you're looking to stab someone in the back, knife them in the heart, or just royally screw them over, Microtech's MCT1057 Jagdkommando fixed blade knife is the definitive way to do it. A version of the manufacturer's...

Conquest purports to marry "ultra-luxurious" with "fully-armored" in its forthcoming handcrafted SUV, the Knight XV. Historically, this type of marriage has not ended well (see: the reigns of Louis XVI and Marie Antoinette;...