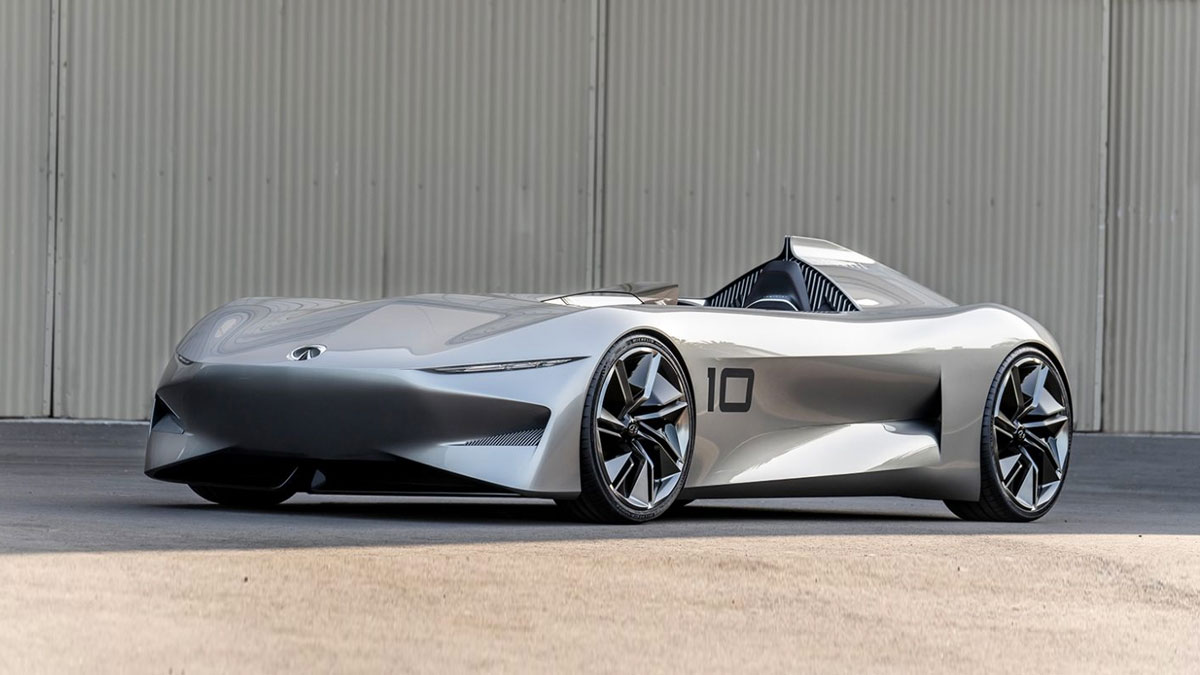 The Infiniti Prototype 10 concept e-speedster is Infiniti Executive Design Director Karim Habib's design debut with the brand. It is also the sickest Infiniti I've seen since the J30 came out in 1993. Dude. I f-loved that car. My 7th grade girlfriend's dad drove one, and one time he picked us up from the movies after working late and when I asked him what the bright pink stuff all over his collar was he told me I could drive the J30 home if I never spoke of his collar again.

With the Prototype 10, Infiniti has taken elements from the classic speedster, such as the car's low layout, long bonnet, open cockpit, "off-the-line acceleration and pulse-racing speeds," and fed them into an electric powertrain and more modern geometric lines. The latter culminate in an outstanding shark fin behind the driver's seat. Infiniti calls the Prototype 10 "a bold representation of the way Infiniti vehicles may look in the future."

Designed and manufactured in the USA. That's the battle cry of the 2014 EQUUS BASS770, a contemporary nod to American muscle cars of the 60s and 70s. It's also probably the reason for its starting price tag of $250 grand...

For a million bucks you'd think they could've gotten a couple shots of this replica Batman Tumbler somewhere nicer than a slab of cracked pavement with weeds growing up through it. And what are those in the background...

Although building a Porsche 911 1:4 scale working flat-six boxer engine won't get you any closer to owning or driving a Porsche 911, this 280+-piece model kit will give you detailed insight into what makes the coveted...

Lazareth's Wazuma V8F Matte Edition combines the best of the Germans with the best of the Italians: it's simple, efficient, and knows the most awesome rides in life are experienced at varying degrees approaching horizontal...

The 50th Anniversary Lamborghini Edition impec is the bike P. Diddy or Kanye West would buy if they took up cycling. Which is to say if they learned to ride a bicycle. Oh the comedy that would ensue the first time Puffy...

This 1967 Ford Shelby Mustang GT500 Fastback Coupe has a pretty specific rarity: it is one of only 11 Shelby American "Engineering" company cars produced in 1967. If you're a real muscle car guy, those stats might be...

Regular diesel, kerosene, paraffin, or biodiesel can now take you from 0 to 60 in 3.7 seconds. Meet the Trident Iceni Magna diesel sports car. It can also top out at speeds of over 190 mph. And its 6.6-liter turbo diesel...

Trion's Nemesis RR is a 100% American-made supercar with 100% American elite status--just 50 standard, plus 9 Black Ops models will be produced--and a 100% American price tag. Estimates start at the million dollar mark...

You've heard the term "wire money," but Conty Fonane's 1967 Ford Mustang GT500 here is some real Wire. Money. Unlike anything I've ever seen or heard of before. The Lesotho-born, South Africa-based artist bends and winds...

Sorry, dudes, someone has already claimed the one and only La Voiture Noire Bugatti plans to produce. But there's good (OK, bittersweet) news too: the "Bugatti enthusiast" who made the purchase handed over $19 million...

Unlike the (now discontinued) TRON Light Cycle, you never could--and likely never will be able to--go to the TRON store and buy one of Timur Bozca's TRON Cars. You might be able to commission one with enough dollars and...