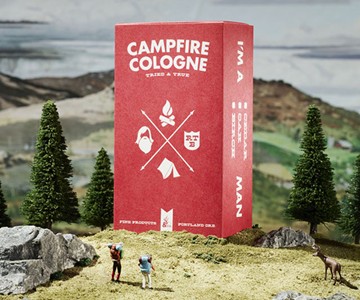 Campfire Cologne. In case a scruffy beard, lumberjack button-up, and logger sports on the Outdoor Network aren't enough to satiate you during the winter months when your favorite campgrounds are covered in snow. In case your wife made you replace your wood-burning fireplace with a spic-and-span, ultra-modern gas insert. In case you are at war with the hippies in the park who substitute drowning themselves in patchouli for showering. In case you just want to smell like smoke. Because smoke smells like MAN! And also BBQ pork.

Campire Cologne is easy to use in the sense that it won't make you stab yourself in the eye with a Pental Rolling Writer like navigating a government Website will, but admittedly requires more steps and effort to extract than traditional spritz bottles of Eau de Ladies Come Running. In answer to the inquiry, "How can I improve my aroma with Campfire Cologne?" maker Antler & Co. recommends:


Muchas danke to Mitch T. for the product suggestion.

Elevate your outdoor dining experience, and give new meaning to sitting 'round the fire with this swell campfire, fire pit, and BBQ table from Joy-Tech. Serving as both seating and barrier, the table sets up with 4 ladder-like...

Kelty's Camp Galley Deluxe ensures your next cookout, car camping or road trip will equip the chefs of your group with everything but, say it with me, the kitchen sink. The soft, expandable pack is designed to clip and...

Sure Fuck Cologne is a self-described "cool fresh manly scent that thrusts women into a crazy hot SEXUAL FRENZY!" Whoa. That's specific. They even put "sexual frenzy" in all caps like it is when I think it over and over...

11 of the Best Backyard Fire Pits

Well flamin' pits and great bowls of fire! Here are 11 of the best backyard fire pits, here to ignite your date nights, goo up your s'mores nights, and make your warm summer nights just a little warmer...

It's gonna cost you a helluva lot more than hot fudge, sprinkles, and Old Spice, but Salt & Straw's Culinary Perfume, an edible fragrance and ice cream topping, is sure to be the foodie gift of the year. Or at least of...

You can't slip Zippo's FireFast Bellows into your pocket like this little blow-it fire starter, but then again, the FireFast Bellows isn't for little fires. And as its name suggests, the Zippo brand of flame stoker doesn't...

Welcome to BBQ Planet. Brought to you by Bricknic, and in a very literal...no, that's the wrong word...a very tangible sense. Bricknic debuted last year with a line of very cool modular campfire and BBQ cooking bricks...

They call Glowbus' Dewdrop Fire Pit an "eye-catcher," and I'd imagine that's especially the case if you get drunk and fall on it, what with those corten steel spikes ready to "catch" any eye that comes their way. The...

Dutch artist Paul Seger's Stealth Pavillion is an art installation and thematic exploration of heterotopia, the idea of anti-space within a expressed context. I know. I hate it too when people define a word that doesn't...

The heading says "Wolf & Grizzly Fire Safe - Portable, Foldable Fire Pit," so what the hunk of metal are you actually looking at in this dude's hand? It's the fire pit. For real. Wolf & Grizzly's Fire Safe consists of...

While Cuisinart did a pretty good job of naming themselves a clever portmanteau word from the words "cuisine" and "art," they didn't do so great in naming their Chimenea Propane Fire Pit. First of all, to my knowledge...

If I could have only one fireside friend, would it be Estwing's Special Edition Fireside Friend Axe, or my friend Cornelius? Hmmm, I can't decide. Let's go over the merits of both...