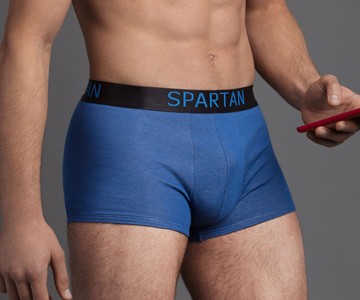 Spartan Underwear heard the refrain every time some newfangled food or drug or piece of tech came out too: "Twenty years from now they'll probably find out it kills you." Or, in the case of the radiation given off by WiFi and cellphone signals, that it stunts a dude's swimmers. Burns up his seeds. Stomps out his Mini-mes.

Spartan notes that, "A number of major scientific institutions around the world have raised alarms over the harmful effects of wireless radiation. By replicating dozens of studies, they have confirmed that wireless radiation has an adverse effect on male fertility." In an effort to help dudes keep their repro-farms thriving - and likely also to capitalize on the hee, hee novelty of the idea - Spartan has developed underwear they say blocks over 99% of cellphone and WiFi radiation.

Spartan boxer briefs have a network of silver fibers woven through their cotton and polyester fabric base. The silver supposedly forms an electromagnetic shield capable of blocking wireless radiation from penetration. If you're familiar with the term, it forms a Faraday cage. If you're not, Spartan compares the effect to a microwave in reverse - Spartan underwear keeps radiation out rather than inside. (Silent Pocket cases for phones and tablets also use this technique, but for privacy and data theft protection.)

A further benefit of hiring an elaborate silver web to guard your family jewels is that silver is also an antibacterial fabric. When the moisture in your sweat mixes with air, it causes the silver to oxidize and release silver ions. The ions get combative with stenchy odor bacteria, ripping them apart to prevent their ability to spread. All the while fighting to keep your ability to spread intact!

Spartan underwear look and feel like regular boxer briefs. They're machine washable, and consist of 35% radiation-blocking silver, 45% cotton, and 20% polyester.

For as little as $35--essentially the cost to procure a wireless router--PirateBox enables you to DIY an anonymous offline mobile file-sharing and communications system to trade movies and music, and chat with friends...

Schweddy balls begone! Boxerkilts are boxer briefs whose front skirt flap takes the place of the traditional C&B pouch, allowing for, if Boxerkilt is to be believed, 100% airflow to and through your stifled junk. The...

Last month this a-hole at my office left a box of Edible Anus chocolates on my desk with a note that said, "I saw these and thought of your face." Now everyone at work calls me Buttmuncher. Like we're 12! So for next...