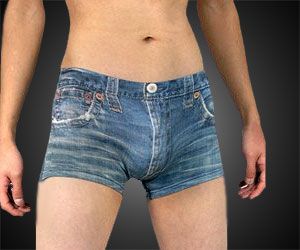 $37
from Japan Trend Shop »
Check It Out

Nothing I could say would contribute any more to your perception of these jean shorts underwear than the pictured model with the girly figure and manly package. From that you can take away: 1) They're denim boxer briefs, 2) They're the ultimate in WTF? fashion, and 3) They're, uh, unisex.

Japan Trend Shop's JeanPants are a pair of cotton underwear that most people will never see underneath their wearers' Dockers and proper denim, but good luck to the girl who thinks she's scored a hottie in a Nanotech Storm Suit at the bar, and then discovers he's also donning acid washed thigh-huggers during the clothing removal process a few hours later. As a courtesy to the ladies, I think all men wearing jean shorts underwear as anything but a joke should also be required to wear red flags on their exteriors, such as a lime green button-up or Ed Hardy T-shirt.

Schweddy balls begone! Boxerkilts are boxer briefs whose front skirt flap takes the place of the traditional C&B pouch, allowing for, if Boxerkilt is to be believed, 100% airflow to and through your stifled junk. The...

Last month this a-hole at my office left a box of Edible Anus chocolates on my desk with a note that said, "I saw these and thought of your face." Now everyone at work calls me Buttmuncher. Like we're 12! So for next...

Although these personalized name or message thong underwear are super...duper...sexy, I could never ask my wife, She-Ra: Princess of Power, to place a chain link g-string between her cheeks. I mean, eek. Talk about a...