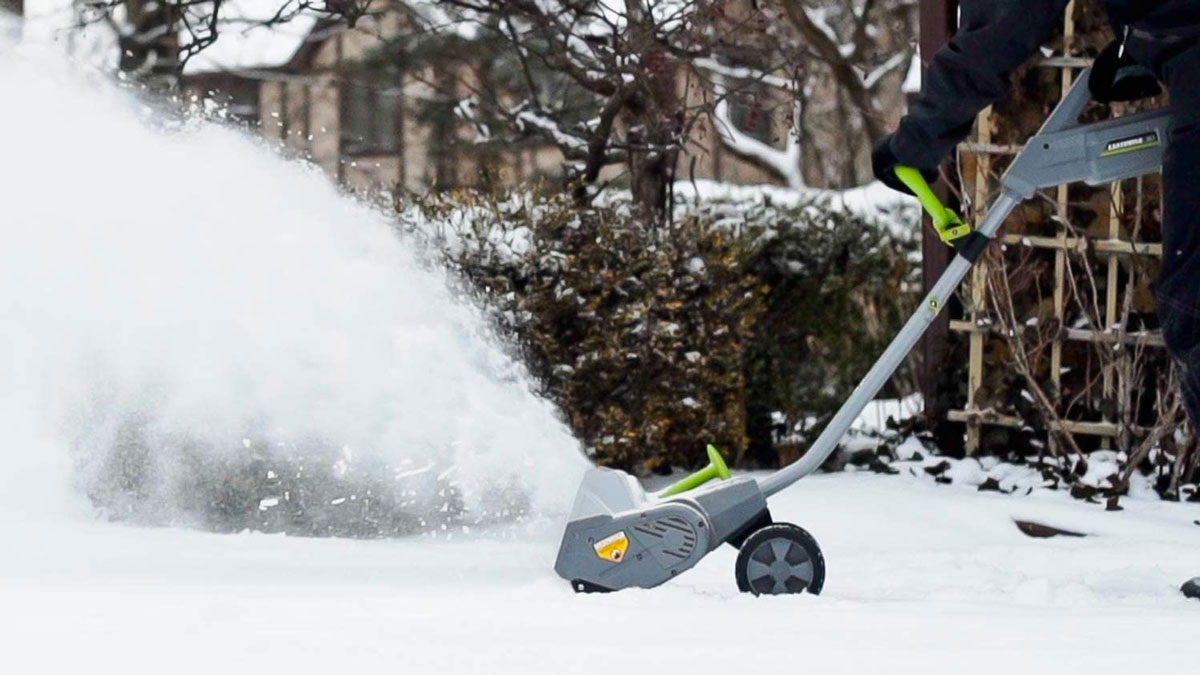 This cordless electric snow shovel from Earthwise is also aptly described as a snow thrower. A snow caster. A snow dozer. And, if it works as advertised, a snow superhero.

Available in 16" 40-volt and 12" 20-volt models, Earthwise electric snow shovels / throwers aim to take all the blood, sweat, and back pain out of clearing driveways, walkways, steps, decks, and sidewalks of snow. Earthwise says both models can move around 300 pounds of snow per minute, a task that's supported by 6" rear wheels for easy maneuvering of the power shovels, which weigh 19 and 11 pounds respectively.

The 16" cordless electric shovel is so named because it clears a width of 16", plus a depth of up to 8", per pass, while the 12" does 12" / 3.5". The former's maximum throw distance is 32', while the latter tosses around 25'. An Earthwise battery and charger are included with electric snow thrower models.

Pushing snow. That sounds a little nicer, a little less likely to throw my back out, than shoveling snow. Don't get me wrong, I'm still not excited about the prospect of receiving a Snowcaster Wheeled Snow Pusher & Barn...

When winter piles on the snow, the Snow Joe Cordless Electric Snow Shovel...moves it around and piles it elsewhere. Just like a manual shovel, but presumably without making you break a sweat under your puffy coat, or...

The only thing I like to shovel is food, into my mouth, so I am very happy to see the Snowbot autonomous snowblower making its way (in a haze of white powder!) to market. A Roomba-style robot for the outdoors, the Snowbot...

The best part about SnowClaw's Backcountry Snow Shovel? OK, maybe second best part, after its ability to help you out in a snowed-in car emergency. The shovel is a multi-tool that can also double as a sled, so when there's...

I can't say no starfish were harmed in the making of ECO-ST, a pet and eco-friendly ice melt made from starfish extract. But I can say - and this is news to me - the de-icer uses starfish bio-waste for good reason: in...

I'm hesitant to get a SnowBrum snow remover because I'd hate to ruin the excitement for the other cars on the road after a snowstorm. You know, the thrill of driving behind someone who scraped their windshields and side...

Kobi eats snow for breakfast! Kobi mows lawns with the stamina of a gamer sitting down to Gears of War 4 for the first time. Kobi sucks up leaves and spits them out like a piece of sushi that looks delicious on the plate...

This shovel has been fitted with a gigantic wheel to make it exponentially easier to use, and it's called the Snow Wolf. So that's two things it has going for it. Also it claims that when old people whose children and...

Ready for some adventure, mate? The AM-V2 from Adventure Mate is a 5-in-1 multi-tool ready to help you chop up, shovel up, hook up, hammer down, and saw through the outdoors. But, like, in a nice way...

"With RotoShovel, you can drill it, dig it, scoop it, or plant it!" Ugh, battery-operated automatic shovel making it easier or not, none of those activities sound fun to me. But, alas, I have a mama, and my mama has demands...

"Crovel", like "spork", is a portmanteau word. It combines "Shovel" and "Crap! I'm gonna get impaled, sawed, and scooped all at once!" GearUp's latest in a respectable line of survival tools, the Crovel Tactical weighs...

I didn't realize there were people out there into running or hiking a trail, and then doing more grunt work grooming or reconfiguring it as their reward for finishing without passing out. Is this a new extreme sport?...