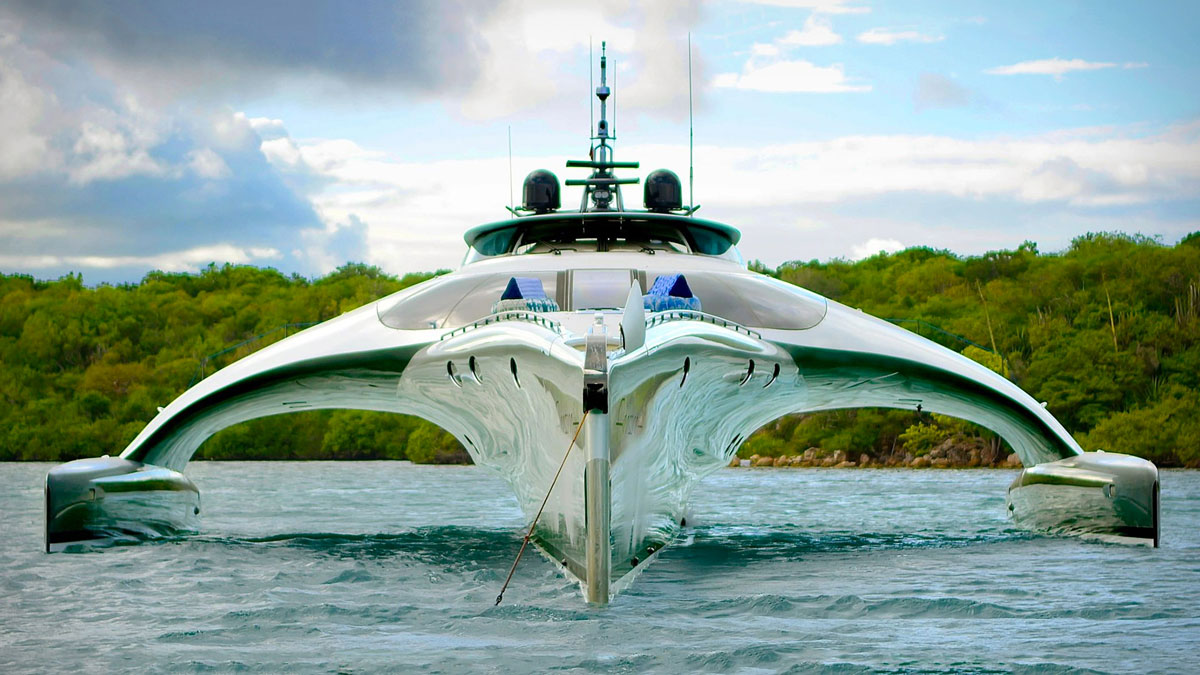 $12 million
from Adastra »
Check It Out

The word "Adastra" doesn't look like it means anything, but the Adastra itself, a 140' trimaran power yacht, sure looks like it means business. Deliberately, to be sure, since the boat was originally built for a fancy Hong Kong businessman. Now, though, he'd like to pass it on to you.

For $12 million dollars. Which is still $7 million less than Bugatti's La Voiture Noire.

Designed by John Shuttleworth and built in Zhuhai, Chin by McConaghy Boats, the Adastra "adventure yacht" features a full carbon closed cell foam laminate superstructure and a CAT C18 1080HP primary engine. The trimaran's fuel tank has a modest 6,600-gallon capacity, meaning you can cruise around 9,000 nautical miles on the Adastra before you'll have to pull out the paddles.

DeLoreans set the standard and all, but if I had to travel to and from the future today, I'd want to hit the space-time continuum in equal parts comfort, class, and automatic liftable flybridge lounge that self-converts...

Strand Craft knows the best thing to do after you get hot is...get wet. So for the hot rod enthusiasts ready to take it to the next level, plus everyone else looking to showboat their wealth with a cushy, seafaring 2-seater...

eleMMent Palazzo, Bran Ferren sees your land yacht, and raises you 1 terrestrial spaceship. He calls it the KiraVan, after his daughter...

The Anthenea, now that's what I call an apodment. This luxe floating suite is a solar-powered, eco-friendly retreat for the very rich, and oceanfront hotels and resorts serving the very rich...

Ark up, Noah! It's time to seek out two of every kind of party animal you know, and lead them onto the Arkup Livable Yacht, a floating home that motors from dock to dock, sea to sea, and tropical paradise to coastal city...

Were these sweet (cheeked) Butt Buoys used in the making of Weekend at Bernie's? If not, they should have been. Ahhh, nothing screams 80s class louder than a PVC anchor marker fashioned in the shape of an inverted lady's...

In a way it sucks that the Black Swan Superyacht is just a concept right now because that means its technologically-advanced, supremely-luxurious, ninja-shark-looking self doesn't really exist. But in way it's good too...

Myerchin's Marlin Spike is too big to be a toothpick, too small to be a fire poker, too blunt to skewer me some kebabs...so what exactly is it? What the EDConundrum is a marlin spike?...

Sip with no tip on your ship. Or, if you prefer, sippy with no tippy on your shippy. The Toadfish Anchor is a non-tipping universal cup holder whose most obvious use is to hold your cans, bottles, tumblers, and glassware...

Is this how all those namaste-in' yay-hoos are able to do yoga on their stand up paddle boards? They've got a little foldaway anchor tucked in their dry bags? Pssh. Headstands and flying crows on a paddle board. I can...

All the dudes who keep emailing to ask why I don't cover more gear and accessories for their superyachts? I'm delighted to appease you today, courtesy of the House of Rolls-Royce. The luxury car maker is releasing the...

The BeTRITON Amphibious Camper-Trike is finally taking after the first Little Piggy and going to market! Formerly known, and seen here, as the Z-Triton, this 2.0 upgraded and rebranded recreational vehicle is still 100%...