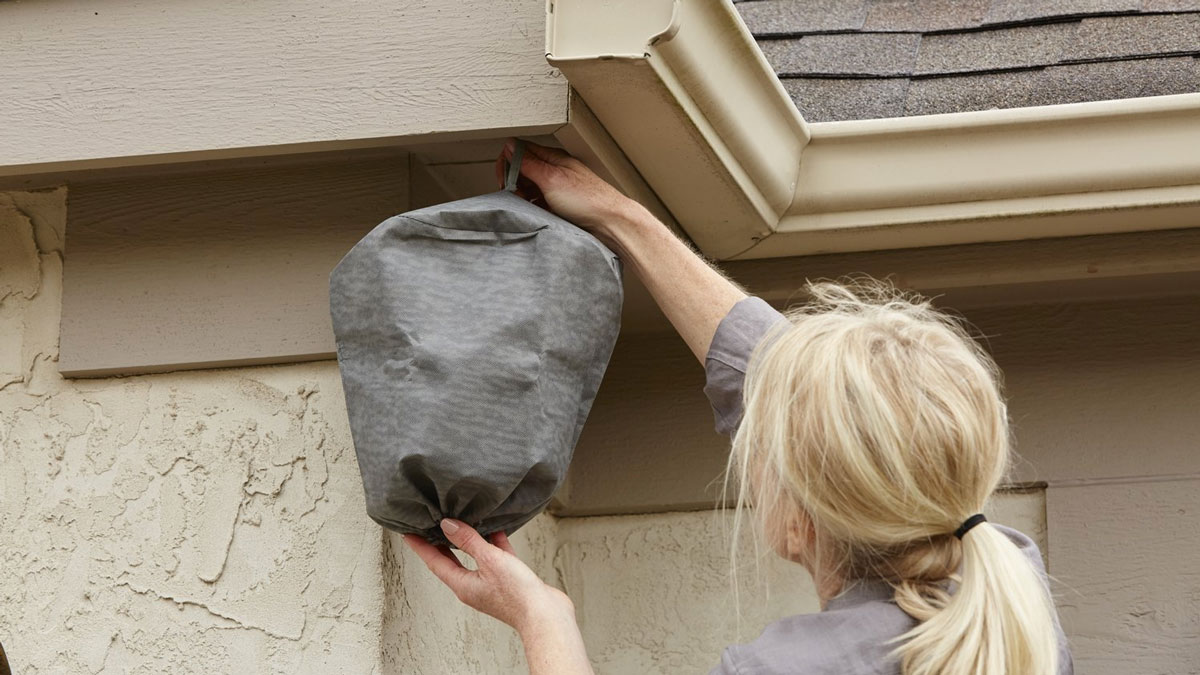 Not sure how much hanging a Waspinator wasp nest decoy off the eaves of your roof is going to do for your home's aesthetics - the thing looks like a bathroom can trash bag - but if you're worried about wasp or hornet squatters, it might be worth the unsightly visuals. Just tell people it's functional avant garde art.

According to Waspinator the decoy for the stinging winged ones "fools wasps into thinking they missed their chance to set up shop near your home or camp." Kind of like when jerks at the coffee shop or on the bus pile their stuff on the chair next to them so newcomers will be inclined to go sit somewhere else. Except with the wasps I guess you have an OK reason to be a space hog - letting them join you could potentially result in a trip to the hospital or anaphylactic shock.

The Waspinator attempts to mimic an enemy wasp nest in shape and appearance. There are other wasp decoys available, but this one says since it's not made of paper like the others it is weatherproof and durable enough to last for several seasons.

Waspinator placement is recommended for a variety of places and conditions, including anywhere you eat or drink outside, roof eaves, on camping trips and picnics, and on decks and patios. Tailgating season sounds like a good candidate too.

The Black+Decker Bug Zapper is an insect killer that looks as handsome as the house flies, mosquitoes, gnats, and wasps it bzzzzt!s will look nasty lying dead in a pile in the zapper's collection tray...

Some people still think that if you get bitten by a snake you should use the cut-'n'-suck, or cut-'n'-have-your-friend-Cornelius-suck method to remove its venom. But really this is just a good way to send the venom back...

These are so intricately made and real looking that I would not keep them in your bedroom at night. Why? Have you ever seen Starship Troopers? These things are great candidates to come alive at night and launch a full...

The bites, stings, itches, and inflammation of summer are coming! The Vortix Bite Cure is a handheld device to help with the aftermath of insect encounters. Placed on areas poked by mosquitoes, flies, bees, wasps, and...

Bee aware, bee kind, and BEEVIVE with your very own Bee Revival Keyring. "Inspired by a spontaneous encounter with a tired bee," these tubular keychain or backpack attachments contain emergency nectar (i.e., ambrosia...

B**ch is always gonna have your honey with a Flow Hive, because this Langstroth-style cedar beehive can be summed in 3 words: Honey. On. Tap...

Buzzy helps relieve the pain of shots, lab draws, bee stings, burns, burning medicines, Band-Aid rip-offs, and tattoos. Tattoos? Really? I mean, I can get behind a vibrating ice pack fashioned in the likeness of a bumblebee...

Beekeeping at home? I beeloving it. B-BOX is a beehive designed specifically for hobbyist beekeeping in urban settings. Italian bee enthusiasts and conservationists beeing, created B-BOX as a safe and easy way - for both...

Call them the building blocks of bee conservation. Bee Bricks, a clever contribution to the endangered solitary bee population, are filled cavities that provide a safe place for individual bees to lay their eggs. They...

Single-handedly save the honeybees from your backyard with the modern Loll Bee Hive! Or, you know, just do your own small part for the local ecosystem, plus learn how many bee stings it takes to make a grown man cry...

Archie McPhee's Car Full of Bees Sunshade is multi-talented. 1) The accordion visor will help protect your car seats from the most brutal of the sun's rays and heat. 2) The hive swarming your windshield, and the clearly...