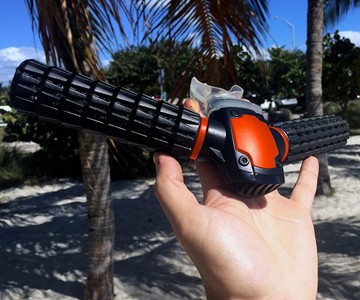 TRITON, the human gills design concept I showed you dudes here 2 years ago (and which many of you had mucho to say about in our comments section) is running a crowdfunding campaign to actually produce the equipment. TRITONs. Mouthpieces with a coupla bicycle handlebars jutting out from them that creator Jeabyun Yeon says can filter out water molecules but absorb and store oxygen. So you can breathe underwater.

Is this real life? Is it April 1? Is Jeabyun Yeon full of sherbet?

Well. I don't know him, and I haven't tried a TRITON myself, but if you're considering dropping $299 to back the breathe-like-a-fishy IndieGoGo campaign, please focus in on the word "fishy." That's how it all sounds to me and my credit card.

Here's the rundown on the science behind TRITON. In technical terms, the apparatus is a "re-breather with artificial gills." The gills are made out of Microporous Hollow Fiber, a material whose threads Yeon and his partners say are smaller than water molecules, and so are able to invite oxygen in but slam the You shall not pass! staff down on H2O. A microprocessor then extracts and stores incoming oxygen for human lung use.

According to Yeon, TRITON's microprocessor is "very powerful" and "modified," and works in conjunction with a lithium-ion battery that is also "powerful" and "modified" to compress oxygen and send the extractions to a storage tank. Swimmers with a TRITON need only bite gently on its mouthpiece and breathe normally to use.

The re-breather does have some limitations that make its existence sound slightly more plausible. One, TRITONs have a maximum usage depth of 15', so no one looking to explore the depths of the ocean can swap out their 50-pound SCUBA tank and reg for a set of handheld gills just yet. TRITON also has a battery life of about 45 minutes when fully charged. If you go deeper than 15', the device will start to vibrate and flash LED lamps. It will also, uh, get harder to breathe. The same vibrations will kick up when the battery is running low, and will continue until you turn the TRITON off.

Note: the second video above shows a guy test snorkeling a TRITON prototype. It is 1:56 long. Normally, it would be a hot 2-minute death for me to have to watch a video of a guy doing lazy laps in a swimming pool for 1:56. Here though, I was like, Dude, this thing either really works, or this guy has mutant lungs, and I was stoked to check it out. But the filming isn't continuous. Twice they show him "breathing" with the TRITON for less than 30 seconds at a time before cutting away to another clip. The last segment the camera stays on him for 40 seconds.

According to the Internet, the average person can hold his or her breath for 2 minutes, and some dude from Brazil once did it for over 20 minutes. So even though there are bubbles and crap coming out of video guy's TRITON gill grills, my skepticism remains firmly intact.

Muchas danke to Sandy D. for the Dude Product Tip.

June 2016 Update: the TRITON has been (repeatedly) called out as bunk, balderdash, and BS. The rebreather's crowdfunding campaign was cancelled, and then relaunched, and then cancelled again. The videos I mention in the copy above have also been removed from YouTube.

As a policy, we typically do not delete entries once they are posted, so we are leaving the TRITON images and info here for you to peruse, scoff at, and continue to send us angry emails about.

It's not a set of human gills, but at least Tribord's Easybreath snorkeling mask doesn't require technology that hasn't come forth from hypothetical existence yet to work. This will make it somewhat easier for two-legged...

Supermarinovation asks, "Have you ever been snorkelling and seen something incredible below you, but haven't been able to get to it before your breath runs out?" To which I say, "Sure." And follow up with, "And have you...

Many of us dig communing with corals and fishes and hot merpeople lookin' for a good time 40 feet beneath the ocean's surface, but suited up SCUBA-style in bulky BC vests and heavy oxygen tanks sort of encumbers the experience...

While they don't boast the superhero aesthetic of Darkfin Gloves--more like the hand-got-tangled-up-in-a-jellyfish aesthetic--these Silicone Swimming Fingers consume a lot less room both in your bag and on your body than...

Scooters on land, not my thing. But a scooter underwater? I'm listening, AquatJet. The AquaJet H2 is a handheld underwater sea scooter, a wing-shaped gadget that propels riders through water at speeds of up to 5.6 mph...

Moving goldfish out of the living room and into the bathroom for a perfect view of what will surely be their place of final burial, down the toilet, seems like an illogical move. That is, until you see this awesome fish...

This is one of the coolest products we've come across in a long time. These are real damn jellyfish swimming around in your house. This is a very legitimate site and has a solution for all budgets...

You know those dreams you have when you're flying, spinning, disoriented, or drowning? They're all about to come true. At once. The SUBWING underwater glider attaches to a rope and boat at one end, and your death grip...

Two events inspired this collection of the best shark themed gifts. The obvious: we're in the middle of Shark Week 2018...