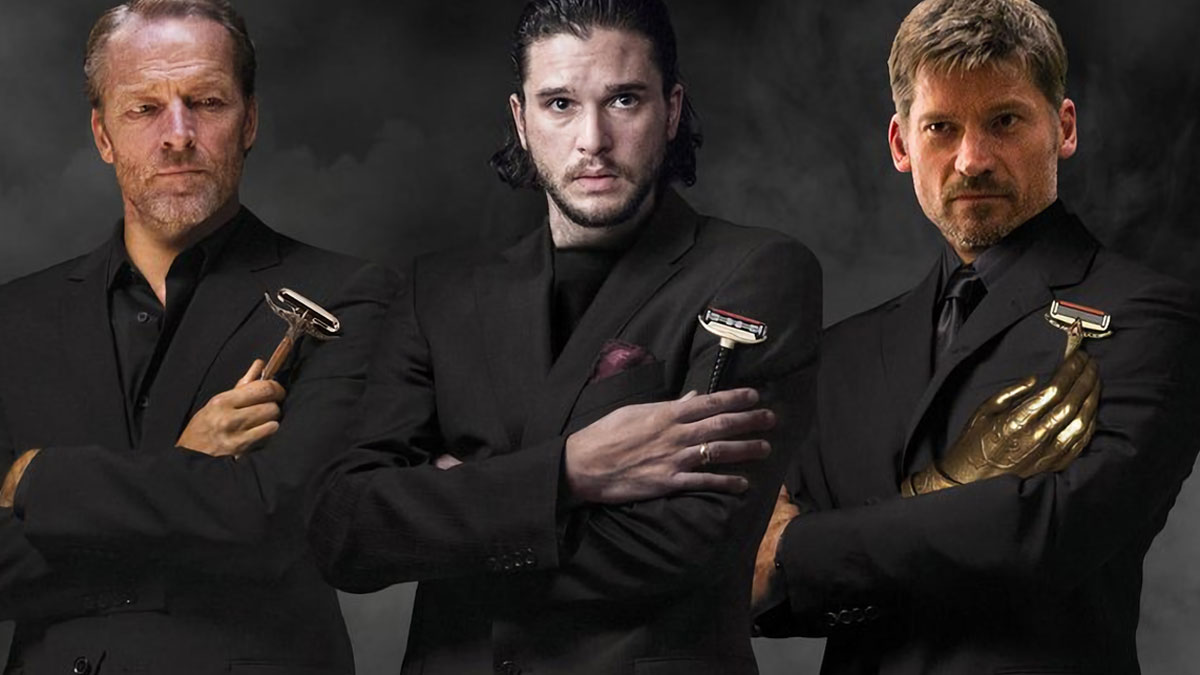 Valyrian Steel Razors don't come with any replacement blades, and have none available to purchase. Because the blades attached to their respective iconic Game of Thrones weapon hilts never dull. And maybe also the cats who forged the set of Valyrian Steel Razors are hoping whoever buys them only shaves as often as Jorah Mormont, Jon Snow, and Jaime Lannister, and they won't get much use anyway.

Quite the lot there to mug for grooming supplies, 'eh?

According to Firebox, the reason we've been bestowed with Valyrian Steel Razors now, thousands of years after the Doom of Valyria, and a few worlds away from Westeros, is that while no new Valyrian steel swords have emerged since the cataclysmic event, "nobody said razors were off the table." Yeah, so it's a "Valyrian steel razor" like it's a "Damascus steel knife."

Oh and one more thing: if you try to buy a Valyrian Steel Razor, you'll probably come away as disappointed and pissed off as you are with Season 8 of Game of Thrones.

The Game of Thrones Collection

The start of Season 4 may still be a few weeks away, but Black Milk's Game of Thrones clothing collection drops in mere hours. Houses Stark, Lannister, Targaryen, and Baratheon represent in an array of nakedness shields...

Though it ultimately couldn't keep Ned Stark's head affixed to his body, the Valyrian steel sword Ice did serve his majesty of Winterfell well. And, should you be one of the lucky keepers of the North to grasp the formidable...

Is there a word for when something is equal parts disturbing and smokin' hot? That's what I'd like to call the image of this lady wearing Dragon Spikes. Their mutant effect is remarkable, somewhere between mythical miracle...

White Walkers are creepy, dude. Creepy enough that I think I'd rather look like one than at one. But I'd most rather look like Khal Drogo because then all men would still be scared of me, and all ladies would quiver in...

My co-worker Drew just got one of these Game of Thrones Dragon Lamps. He sits it on his desk at work. Guess what I just got to sit on mine? Bowman Mini Crossbow, baby! Working on attaching some lion head embellishments...

DCIllusion hand forge and finesse their blades from damascus steel, their handles from the likes of bone, horns, and brass, and their designs from the combined imaginations of the world's best LARPers. Each of the two...

No girl who applies one of Seventh Skin's Game of Thrones temporary tattoos better get mad at me for staring at her chest. The intricacy, the detail, and the artistry of these short-term odes to Houses Targaryen, Stark...

It's dangerous to leave the house without a key! Take this set that will also serve as your sword and shield if the gangs...of ants...attack. The Key Armory stocks up fantasy and gaming fans' keychains with iconic swords...

Holy Daenerys Mother of Dragons. If I ever propose marriage, or more likely if I ever need to bribe a girl, a ring whose gem is mounted on fire-breathing beasts of fantasy is definitely the one I'm using to do it. ArtMasters...

Composite Effects' Night King mask is the most recent addition to their Game of Thrones White Walker collection. Previously we saw one of the Night King's long-haired, extra-wrinkly cohorts. Both are designed to produce...