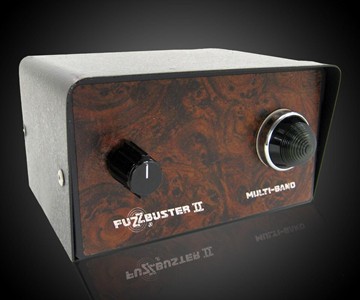 I know most of you have heard of a radar detector*. Possibly you've used one before. Maybe you've even tried the original Fuzzbuster. But whether or not you're aware of how life (and wallet and license points) saving the devices can be, Electrolert says the only radar detector you need ever concern yourself with again is their latest and greatest: the Fuzzbuster II.

The Fuzzbuster II is the most advanced radar detector ever made. It provides warning over a range of up to 3 miles, and across all radar platforms. This includes X-band, K-band, Y-band, and the ultra-sophisticated KR-11. There are also rumors it can detect primordial black holes, the Bat-Signal, and the Force.

Compact and svelte at just under the size of the average male's arm from fingertips to elbow, the Fuzzbuster II mounts easily to any car dash, and powers through its cigarette lighter. (So don't forget the Zippo on your drive from Cincy to see the Reds play the Sox in Game 7.) No antenna, no special wiring, and no license for use is required.

If you're looking for the perfect gift for someone who drives a car (ahem, Mama), how about one that could save him hundreds of dollars and the tedium of explaining to State Patrol that he was only going 90 in a 60 because he ate a dozen White Castle sliders on a dare 45 minutes ago and is now feeling an inverted Old Faithful on the cusp of blowing out of his ass?

*For those who are seeing this cutting-edge marvel of modern technology for the first time, the radar detector was designed by Dale Smith to alert drivers that a cop is nearby and out for speedometer blood. Law enforcement officials use doppler radar to beam radio waves at, and in turn measure the speed of, moving vehicles. Smith's invention counteracts these efforts with a superheterodyne receiver, which can detect the electromagnetic emissions from the cop's radar gun. When an emission reaches the receiver it sounds an alarm and a speeding driver learns s/he is at risk of getting caught in time to slow down. Genius, right? And I thought Teslas were the greatest thing to happen to the automotive industry this century.

Technically, Dodge debuted its Tomahawk, a motorcycle with 4 wheels, a Dodge Viper engine, and top speed capabilities of 420 mph, a decade ago at the 2003 North American International Auto Show in Detroit. Really though...

Is this a real problem? Or rather, is it such a big deal? People using your driveway as a turnaround. Cars getting lost or going one street too far and pulling into 20' of your pavement to correct their mistake. Since...

Mojipic is a voice-controlled emoji car display. Brothers Ilya and Igor Pashko designed the bumper sticker and decal alternative for drivers who don't just have something, but a lot of things, to say. You can change your...

And by 100 MPH Bicycle, Donhou Cycles really means Bicycle That Has Peaked at 60 MPH on the Open Road but Could Theoretically Make It to 100. I'm not sure how that theory was developed. I think it's how fast frame builder...

BAGO - Glovebox Clip to Keep Bags Upright in the Car

Keep your to-go bags from to-going all over your car with BAGO, an adjustable clip that secures to your glovebox at one end, and a variety of takeout and grocery bags with a metal clamp at the other...

Stuff to Keep in Your Car

Whether I'm in the car commuting or road tripping, driving or riding shotgun, there are certain items I like to have on hand on the off almost certain chance I get stuck in traffic...

Street-legal Formula 1 car for your collection? From British supercar manufacturer BAC comes a run of Monos for the wealth-blessed and speed-obsesseds' taking. These seductively futuristic road rockets combine lightweight...

To everything turn, turn, turn. And by "everything" I mean tight driveways, and by "turn, turn, turn" I mean up to 360 degrees into and out of them, courtesy of Driveway Turntables. A genius, no joke, no exaggeration...

Your car comes ready to sssswipe the rain and fog off your front windshield, game to sssswipe it off the back, but what about the vissssibility and blind sssspots at your ssssides? ViperSwipers are poly-rubber strip side...

GasPods promise an average savings of $120 per car per year. So, no, applying the aerodynamic champions of fuel efficiency won't result in a bank account boon of exotic Asian vacation proportions...or even really Japanese...

I didn't think the foam helmets and seizure-inducing neon spandex could look any more ridiculous rolling down the road, yelling at cars to get out of their lane, and then cutting into traffic at will when it suits them...

Keep my eyes on the road? Whaaat? I haven't done that since, like, 1996. For a while I would clip my nails and text while driving to pass the time, but after all of those creepy PSAs came out I could hardly even type...