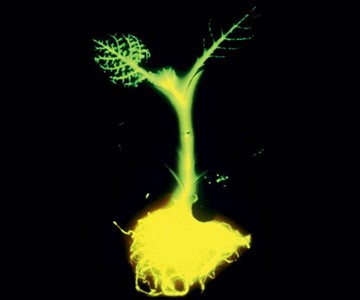 After raising nearly half a million dollars on Kickstarter, the Glowing Plants project is accepting pre-orders and synthetic biology-ing away to deliver their natural sources of light in Fall 2014. Make no mistake, Glowing Plants are an altered form of life. Creators Antony Evans and Kyle Taylor, the latter carrying a PhD in Cell and Molecular Biology from Stanford, have developed a way to design plant DNA sequences on a computer and then laser print that DNA into existence. Using a Gene Gun they are able to insert the DNA into seeds and award the resultant plant a healthy green glow.

The design-print-transform cycle increases a plant's luminescent output with each iteration; the more times the Glowing Plant team is able to inject treated DNA, the brighter a plant will be. It's pretty impressive in the sense that, holy crap, scientists can print and inject actual genetic material that transforms its subject, and also in the sense that a window box full of glowing plants would look rad. But, with only one working--and not entirely jaw-dropping--prototype to date, we'll see how realistic it is to mass produce seeds and plants able to consistently and dependably output enough wattage to provide usable natural lighting.

We'll also see if they're better than the mushrooms and other leafy greens programmed by the computational device that is Mother Nature to grow 'n' glow on their own.

Those who want to be part of the process, or just call dibs on one of the first Gene Gunned Glowing Plants, can pre-order their choice of seeds (pack of 50 to 100), a fledgling Glowing Arabidopsis, or a Glowing Rose (the latter will not ship prior to June 2015).

Two things. One maybe you already know, one probably you don't. 1) Tritium is a radioactive isotope of hydrogen, and its natural occurrence on earth is extremely rare. However, the dopeness that is humankind can produce...

Ambient Glow Technology's Glow Stones combine with concrete--they either mix in freestyle or nestle in methodically--to create everything from illuminated pathways to Fairyland to sculpted lawn ornaments to mood-setting...

Moonglow Rings take minimalistic colored and metal bands on a trip through classic sci-fi adventures when the lights go out. Though Black Badger Advanced Composites' glow-in-the-dark finger decor comes from Sweden, not...

Marijuana is legal where I live (i.e., my bedroom) so why shouldn't I don my farmer's hat and experiment with growing my own? Especially now that sweet cannabis culinary gadgets like the Magical Butter and smart growing...

MONITREE isn't really a money tree, but if you're of the mind that plants make your life richer, these living computer monitor vines should indeed increase your emotional net worth...

Terrarium, aquarium, or herb garden. Grow flowers in the winter, or make a rainforest for your frogs. Read no complex manuals and acquire 0 new skills to learn how to do it. The Biopod is smart enough for the both of...

Nothing says Happy Mother's Day like a bouquet of sticky flowers caked with dead fruit flies and fungus gnats! ... And I'm only sorta kidding about that, especially if you need a gift for a mom who's also an avid gardener...

All the cuteness, half the care, and bunny ear succulents won't drop poop pellets all over your house when you bring them out to play. With the current popularity of houseplants, succulents in particular, and the impending...

"A self-contained, low maintenance REEF that will light up any desk with brightly colored coral." So goes the blurb on PJ Reefs' desktop-sized saltwater aquarium. I have to say, mine eyes are digging the brightly colored...