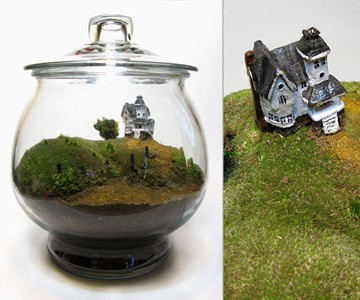 According to the Handbook for the Recently Deceased, the Beetlejuice Terrarium is an accurately-depicted scale model of the Maitland-Deetz estate, replete with fence posts, dirt driveway, the foreboding, Burton-esque tree, and a 1 1/2" replica of the iconic house where Delia, Otho, Charles, and the gang gave their riveting interpretation of "The Banana Boat Song." There may even be a sandworm or two under the rolling moss hills of the front yard. Don't look for the BJ himself, though, as the glowing red whore house appears not to have made the cut for inclusion.

Meticulously crafted with a wax-sculpted, hand-painted house, plus moss harvested from Etsy vendor Rachelthebish's hometown forests, the 10" sustainable ecosystem arrives alive and ready to be spritz-watered sparingly every few weeks. Instructions for care are included in the shipment.

Retrospective Musing: Beetlejuice hit the big screen in 1988, and starred Michael Keaton as the eponymous bringer of the weird, lewd, and all-around BSC. Fast-forward 14 years. Where's Michael Keaton now? Where's that man who played Creeptastic Hellraiser so effortlessly, so believably, today? I haven't seen him in ages. Do we even have proof that he's still alive? You know what I think? I think he was swallowed by, and is currently living inside, someone else who starred in Beetlejuice. Someone who, in 1988, seemed sort of unassuming and vanilla, but who now constantly, and with great fanfare, exhibits the Beetlejuicy qualities of weird, lewd, and all-around BSC. I think Alec Baldwin pulled a Moby Dick and ate Michael Keaton.

The HydraLamp Anti-Gravity Fountain Lamp is cool on its own and all, but what really makes this neat display piece a candidate for your living room are the cat and Corgi. Check out the videos. These two are as baffled...

Marijuana is legal where I live (i.e., my bedroom) so why shouldn't I don my farmer's hat and experiment with growing my own? Especially now that sweet cannabis culinary gadgets like the Magical Butter and smart growing...

Terrarium, aquarium, or herb garden. Grow flowers in the winter, or make a rainforest for your frogs. Read no complex manuals and acquire 0 new skills to learn how to do it. The Biopod is smart enough for the both of...

Sea monkeys anyone? More like tiny shrimps. A bit redundant, but that's what's in there. No diaper changing. No picking up shit with a plastic bag. No feeding. No nothing. These are the best friends money can buy. Buy...

21 Funky & Unique Gifts for the Home

These 21 funky & unique gifts for the home will add some freshness and flair to your living space, along with quenching the thirst to redecorate you may be experiencing as 2020 continues to keep us at home. My wife, for...

These 14 charming design gifts feature exceptional executions, yes. But they're as much about the cleverness of the ideas to create them in the first place. They're super cool designs conceived by people who were wearing...

"A self-contained, low maintenance REEF that will light up any desk with brightly colored coral." So goes the blurb on PJ Reefs' desktop-sized saltwater aquarium. I have to say, mine eyes are digging the brightly colored...

But officer, where could I possibly be growing marijuana? As you can see, down here in my mama's basement it's just me, my dirty dishes collection, and my circa 1992 PC. I just finished a particularly exhilarating game...

After raising nearly half a million dollars on Kickstarter, the Glowing Plants project is accepting pre-orders and synthetic biology-ing away to deliver their natural sources of light in Fall 2014. Make no mistake, Glowing...

All the cuteness, half the care, and bunny ear succulents won't drop poop pellets all over your house when you bring them out to play. With the current popularity of houseplants, succulents in particular, and the impending...