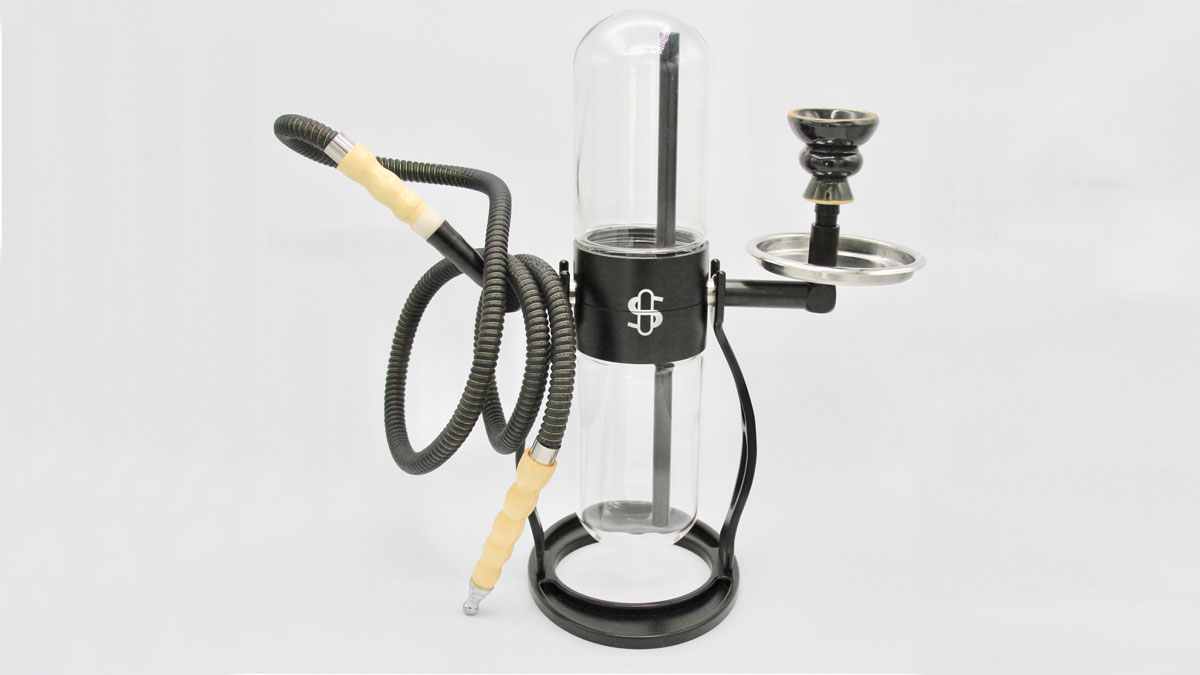 If nothing else, the Studenglass Gravity Pipe at least appears to have Seth Rogen's hack of approval. According to a video the actor posted on his Instagram account, hitting the bong produced a delightful 25-minute coughing fit. During which time his wife stood there and laughed at him.

Well. I might not be able to afford a fancy $500 water pipe that looks like a cross between an hourglass and a fat pill capsule, but at least Rogen and I have the personality of our wives in common.

The Studenglass aims to combine and improve upon the water pipe and hookah methods of smoking. Unlike another pricey inhalation enabler, the Volcano, the Studenglass is a pure gravity bong that requires no battery, plug, or motor. Instead, it uses 180 degrees of rotation to conjure and deliver its flow of smoke, the speed of which partakers can control with the tilt of the pipe's glass chambers.

The Studenglass also delivers hits without requiring you and all your friends Cornelius to share a mouthpiece, so it's great for flu season!

Muchas danke to Manny for the Dude Product Tip.

These Bong Butt Plugs are smokin' hot! Though I'm not sure if it's from the Blue Dream or the 3 bowls of Four-Chile Chili I ate during NFL Sunday coming out of them...

My favorite part of 7pipe's Twisty Glass Blunt video is the shot of a lady taking a hit off one and then blowing out birthday candles. Good stuff in, bad stuff out, and now we eat cake!...

Four score and twenty years ago...no wait, that's a different 420. And, if I remember correctly, an ode to something not nearly as interesting as these 14 smokin' hot gifts for weed enthusiasts. One thing they do share...

420 Science breaks it out only once a year, so if a 14" long, 8-bowled glass Grav Labs Menorah bong is what you've been foregoing 20 sacks and Gordita Supremes to save up for since May, here's your chance to turn your...

Roll-uh-Bowl is your foldable, portable, indestructible bong on the go. A waterpipe for the adventurer, the backwoods trekker, the beach bum, the guy who drops, knocks, and sits on things a lot. Roll-uh-Bowl folds and...

4/20 might be a "special interest" day for smokers and marijuana advocates, but for those who truly love smoking culture, this gallery of unique pipes, vapes, and smoking gear could be your go-to happy place all year...

The serpent is at it again. This time, though, its temptation is a pair of snaking, maze-like water pipes, since it knows you'll need more than an apple to succumb to Original THCin (that said, in a pinch, you can bore...

No pipe? No papers? No hose, tube, or apple? If you've got the gnoB Socket water bottle cap you can take a deep sigh of relief...followed immediately by a deep breath in. The gnoB Socket is a sneaky little piece of EDC...

Classy is in Session. The Session Bong seeks to be your "beautiful, functional, and unapologetically simple" smoking companion. In other words, this is one classy water pipe. Session hopes it will also be the preferred...

So long beer bong. Pump up to 24 ounces of cold, tasty, inhibition stealing beer down your gullet in less than two seconds with the Bierstick. It's like a 2x multiplier for having fun. You're gonna have fun anyway...

Relax. Calm down. Funny how those have turned into fightin' words. On top of being difficult states to achieve even when some condescending butthead isn't issuing them as a command. If we were together I'd say no such...