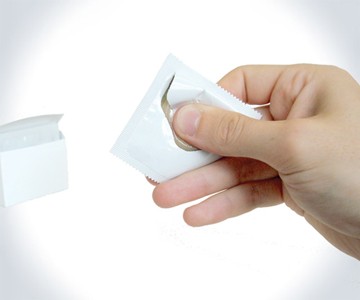 Though noble, I was very surprised to learn that One-Handed Condom Wrapper dreamer upper and designer Ben Pawle developed his concept (yes, sadly just a concept at this point, though now that it's hit the Web, I imagine it will be mere days before Pawle's door is beaten down by throngs of investors) after extensive explorations into the plight of Hemiplegics--people born with limited or no use of one side of their bodies, with symptoms manifesting similar to those who have experienced a stroke. Not surprised because I don't think people of all abilities should have equal access to safe sexual practices, but because a one-handed condom wrapper is something pretty much every human on the planet, and probably a few horses in backwoods hick towns, could use at some point in life, and it's kind of revolutionary and something someone--like me, dammit--should have come up with long ago.

So kudos to you, Ben Pawle. And if you could spare a moment in your philanthropic intellectual pursuits, might I suggest taking your perforated pockets o' genius to a very large scale manufacturer who can churn out a few hundred million for me and the rest of the condom-using world.

Muchas danke to Mitch T. for the product suggestion.

Super hard and spring loaded, that's ALLEX Scissors for ya. Hasn't changed a bit since high school, except for maybe bulking up here and there. Growing out of his safety blade into a burly, heavy-duty angled cutter. Replacing...

"The Galactic Cap is a condom men will want to wear and their partners will love. A better alternative, it will increase condom use and promote healthier sex." Want to wear? Partners will love? Well. Considering this...

In a bad situation, I think I'd say the same thing about seeing Assless Yoga Pants as I would about seeing Superman: Here they come to save the daaaaay!...

Boxes in a Box Prank Gift

Uh, is the price of the Boxes in a Box Prank Gift a prank too? And here's the other thing: while in an abstract sense I like the idea of watching someone get increasingly frustrated opening a packing product Russian Doll...