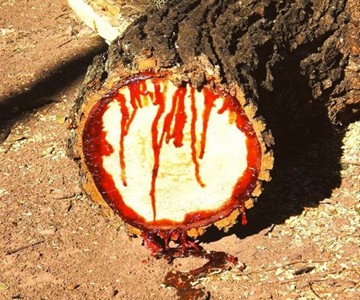 The Croton lechleri bleeds to save you from cuts, bacteria, acne, wrinkles, and receding gums. At least if you believe the loooong list of indications that come with each bottle of Dragon's Blood. Dragon's Blood is a striking red resin or sap obtainable from a few different plant species that has long been used in traditional Chinese medicine as an anti-fungal, anti-microbial, anti-bacterial treatment for everything from open wounds and bites to GI issues. This bottled version contains 100% raw Croton lechleri tree sap.

Reviews of the product are very positive, particularly reports of using Dragon's Blood as a natural remedy for cuts and scrapes, and for oral health. Some say it heals wounds 4 times faster, though faster than what, I'm not sure. Manmade antibiotics? The body on its own? Mayonnaise? And those who brush or swish with it report hyper-clean teeth and much healthier gums.

Confession: I bought some Dragon's Blood a few weeks ago. Because my dentist keeps telling me I brush too hard and am F'ing up my gums. I thought this might be a way to repair them without changing my behavior. But I'll never know because what Dragon's Blood tastes like is Dragon's Poison Stomach Bile. I was able to put that foulness in my mouth exactly one time. Holy crap is it awful. Other people complain about the smell, but the bottle I got smells like nothing. And tastes like karma for every wrong I've ever committed in my whole life.

So now my girlfriend mixes it in with her moisturizer and lathers it on her face to tighten her skin and fight wrinkles. I'll let you know in 10 years how that worked out.

I will say one cool thing about the sap itself is that it comes out of the bottle exactly as you see in the photos. Red and runny. But if you squeeze a few drops into your palm and then swirl it around with your finger it lightens to a white-gray color and also thickens into a paste that makes it very easy, and not messy, to apply to mosquito bites or cat scratches or eczema.

More issues and maladies they say Dragon's Blood can alleviate, combat, or support:

Think of the Y-Brush as a Roomba for your teeth. Or just think of it as an electric toothbrush shaped like a mouthguard that brushes all your teeth all by itself. In just 10 seconds. Hands-free. You could pee and brush...

Earthling, meet Earthing, makers of so-called "grounding mats" intended to replicate the effects of walking barefoot on the bare earth. Not the feeling, mind, you, but the effects. Oh yeah, dudes, someone call Gwyneth...

Cannabidiol, or CBD Oil is a legal alternative extracted from cannabis that is being used to treat everything from anxiety to arthritis pain. Unlike THC, CBD Oil doesn't give the user any noticeable head high but can...

It looks like someone put the inside of a sea urchin on the inside of a mouthpiece, but if Blizzident really works, I wouldn't care if it looked like one of the McPoyle brothers' armpits. I'll be able to brush my teeth--and...

My hips don't lie...they frickin' hurt. Tight, ropey, maybe not quite ready for Hip-Fin levels of pain to release them, but, hey. If it's agony for minutes and ecstasy for days thereafter, I'm dude enough to take it...

Reminding people of vomit has always been a good way to get them to brush their teeth, but it goes a little differently when the Puking Grogu, a 3D-printed Baby Yoda toothpaste topper comes into play. Whereas normally...

Sweet, Mode, I've been looking for a wireless electric toothbrush to go with my black marbled bathroom wallpaper and black toilet. Really...

Am I more or less likely to floss with the Philips Sonicare Cordless Power Flosser than I am with regular dental floss? Hmmm, well, as long as I use Philips' Sonicare Toothbrush companion more than once a month, I'd say...

Application of Sam's Natural Down There Repair fixes two major male discomforts and social embarrassments: chafed crotch and smelly crotch. It can also be used preventatively, thwarting these afflictions from striking...

Have you gotten the new iHunch yet? The Backpod is a tool developed in New Zealand (so it's Kiwi green, naturally) to relieve the back and neck pain, headaches, and poor posture that can result from the hours we spend...

Well. I wouldn't argue it isn't dirty. I'm just not sure I care enough to go to the lengths required to make my hiney shiney. I think this cleansing brush set for the bunghole is geared towards women anyway, judging by...