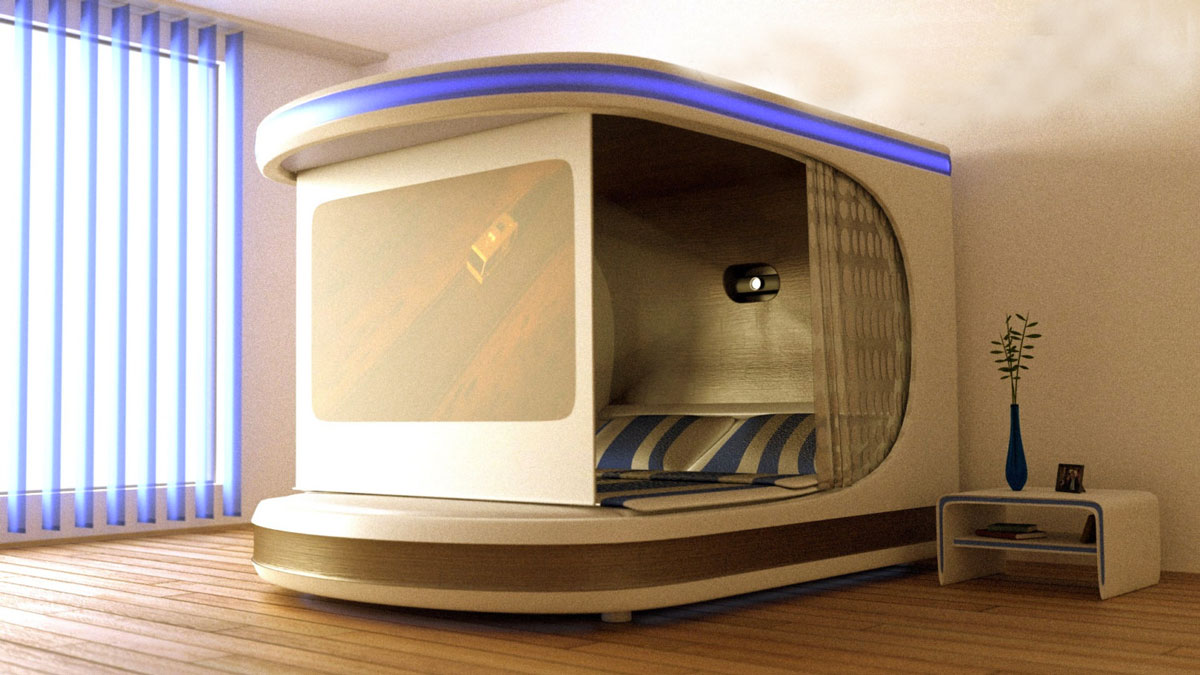 January 2017 Update: iNyx has now developed its own website. At printing, the online ordering system linked to an iNyx IndieGoGo crowdfunding page here.

March 31, 2016 Update: I received an email from a Dude reader who tried to purchase an iNyx bed. She said that her order was cancelled shortly after she placed it, and the iNyx shop was then removed from Etsy. I have no further information at this time about what happened to the listing, or whether or not the iNyx is a legitimate product that functions as it claims. The website printed on some of the iNyx photos, www.i-nyx.com, still redirects to the (former) iNyx Etsy shop. Muchas danke to Rachel B. for telling us about her experience.

iNyx has the same idea as HiCan: bring the bedroom to the bed, and never leave it. The difference is that iNyx has figured out how to craft this bastion of relaxion, privacy, and utter laziness for about $50 grand less than HiCan. It deems itself the world's most advanced, coolest, and affordable bed.

iNyx beds are the darlings of Polish designer Patryk Solarczyk. While not specifically stated in his Etsy shop, it seems that Solarczyk is using the Etsy storefront to gauge international interest in the iNyx concept. If consumers are responsive, he will launch his own iNyx website and online store. Also worth noting is that Solarczyk says he will sell his first 5 models of each bed at its $1,499 to $2,499 list price + shipping. He anticipates eventual retail price to be $9,999 and up.

Oh, this is bad. I mean bed. These Gaming Beds from Japanese gaming furniture brand Bauhutte might represent everything that's both right and wrong with society today. Their slick design, and even that their existence...

The Bird's Nest Bed can accommodate up to 16 people at once. Take note swingers, Mormons, women undergoing IVF treatments, and the Duggar family! The giant basin of comfort was brainstormed and brought to life by O*GE...

Italian in both slick aesthetics and siesta-time concept, I exaggerate not when I say the HiCan high fidelity canopy bed will persuade its occupants never to leave its ultra-modern, four-poster confines. HiCan designer...

Oh boy. The magic of the sky meets the magic of where the magic happens. MotoArt, a group of daring-with-a-touch-of-devious mile-high artists, recycles old jet parts into exclusive, flashy pieces of furniture and home...

SONU Sleep System for Side Sleepers

The SONU Sleep System for side sleepers might be a game changer but, damm, dudes. You really gotta be committed to sleeping on your side to get one. Not that the channeled mattress doesn't accommodate back and belly sleepers...

The Boomerang Bed is the perfect name for Portuguese designer Joao Teixeira's piece of sleep-work-hang furniture. With its slidable work, dining, and streaming table, and relaxing, minimalist aesthetic, it's the bed...

When I look at Podtime's new collapsible Sleeping Pod, an extra cozy 3.9' wide x 6.9' long personal retreat and slumbering space for college students, or anyone else on a crusade to find efficient luxury, exactly two...

The philosophy and science behind the Remee Lucid Dreaming Mask makes the most sense to the highly intelligent, the highly self-actualized, and the highly high. For the rest of us, watching the accompanying video is probably...

Jason Barton made a king bed with enough room for the King of the Bed. Which means you'll be sleeping on a cut piece of memory foam stuck in the 23" insert tacked onto its side...

My friend Victor showed me this Serenity Pod. Actually he showed me the ones meant for dogs and cats, but I was like, Victor. Why would I spend one thousand dollars to give my pet a world of serenity and slumber when...

It's about that time of year. The time that anyone with a new roommate starts to assess exactly how he or she feels about said roommate. Best bud, mortal enemy, tolerable nuisance, unfortunate insertion into the human...