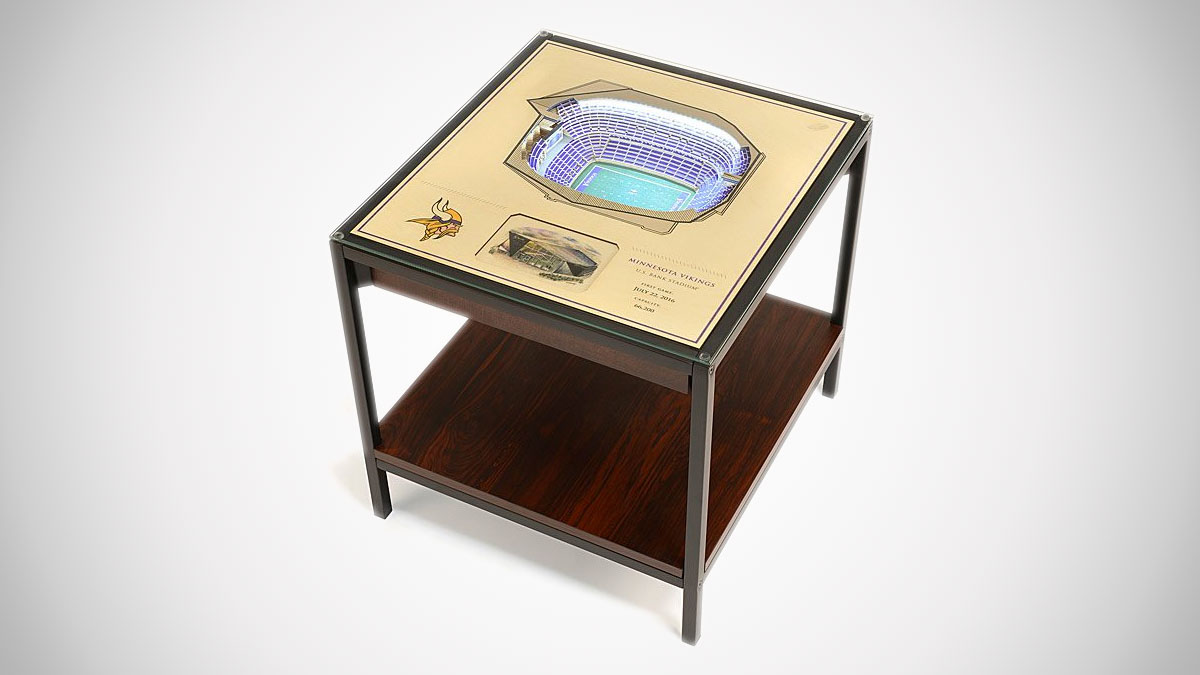 This series of Football Stadium Lights End Tables give NFL and NCAA superfans a unique way to express their team love. They're also probably the closest any fan is going to get to an actual football stadium for a good long socially distanced time.

The tables are still cool though. Each features an LED-lit 3D exact replica of a famous US football stadium set into the table's glass-topped surface. Stadiums are hand-assembled from poplar wood, and are complemented by colored etchings of the team's name and/or logo, the stadium exterior, and information on the stadium's name, when it opened, and seating capacity. Including the stadium's name is an interesting choice considering that aside from Green Bay's Lambeau Field they all seem to change about every 5 or 10 years based on corporate sponsorship, but...oh well?

The end tables' structure is beechwood, and dimensions are 22" long x 23.50" wide x 22.5" high. While nowhere near all NFL or college football teams are represented in the Stadium Lights End Table collections, presumably the ones market research shows have the most enthusiastic (i.e., willing to spend money) fans are. They include the pictured Minnesota Vikings, the New England Patriots, the Seattle Seahawks, the Green Bay Packers, the Chicago Bears, the Ohio State Buckeyes, and the Michigan Wolverines.

Nothin' like sittin' on a wet stadium seat, picnic bench, or muddy slab of ground. Especially when the wetness really starts permeating your skin and making your butt itchy. Numb and itchy if it's cold out! And now here...

Strictly speaking, Attwood Marine's Bellow Signal Horn is meant for boaters and sailers, a tool to be kept on board for use in alerting others of your presence, or draw attention in emergency situations. You can also...

These tiny 3-inch air horns put big sound in the palm of your hand. And also the breath of your lungs. Operating off of human rather than compressed air, the 3-inch barrels require you to channel your inner boogie-woogie...

If you were thinking of punting the Super Bowl this year, here's a thought: bundt it instead. Nordic Ware's Stadium Bundt Pan won't transport you to Tampa per se, but it will bring at least one kind of exhilarating action...

I don't know how the people behind you are gonna feel about the reclining part of Ventura's Stadium Seats, but if the chair's thousand+ reviews are to be believed, you'll sure love it...

Is it football season? Either one of them, American football or soccer? Yes to MLS, but no to NFL? But the NFL is about to have their draft? OK, then it sounds like something exciting is going on with both of these sports...

Though we've long since entered the nuclear age, NERF has always inexplicably resisted foamifying the most powerful bomb in the world into a play toy for children. That is, until now. Dribble your drool upon the NERF...

It's not surprising that the Deaf Leopard train horn gun can put the power and sound of a choo choo in our hands. I mean, if they can turn forearm muscles into remote control guns with an armband and find the Higgs boson...

I can't say much about Men in Blazers Present Gods of Soccer: The Pantheon of the 100 Greatest Soccer Players (According to Us), because I'm not a knowledgeable fan of soccer / football / footy / footie. But I can say...

Getting pummeled and concussed by a 350-pound defensive lineman as I fumble the team's potentially game-winning TD during the last play of the 4th quarter still might be worth it if I had a pair of Under Armour's Alter...

While the most essential pieces of tailgating gear might be beer and brats, I know no one's going overlook or forget those. Same goes for your favorite football team's jerseys, hats, and onesies, and your recipe for Super...