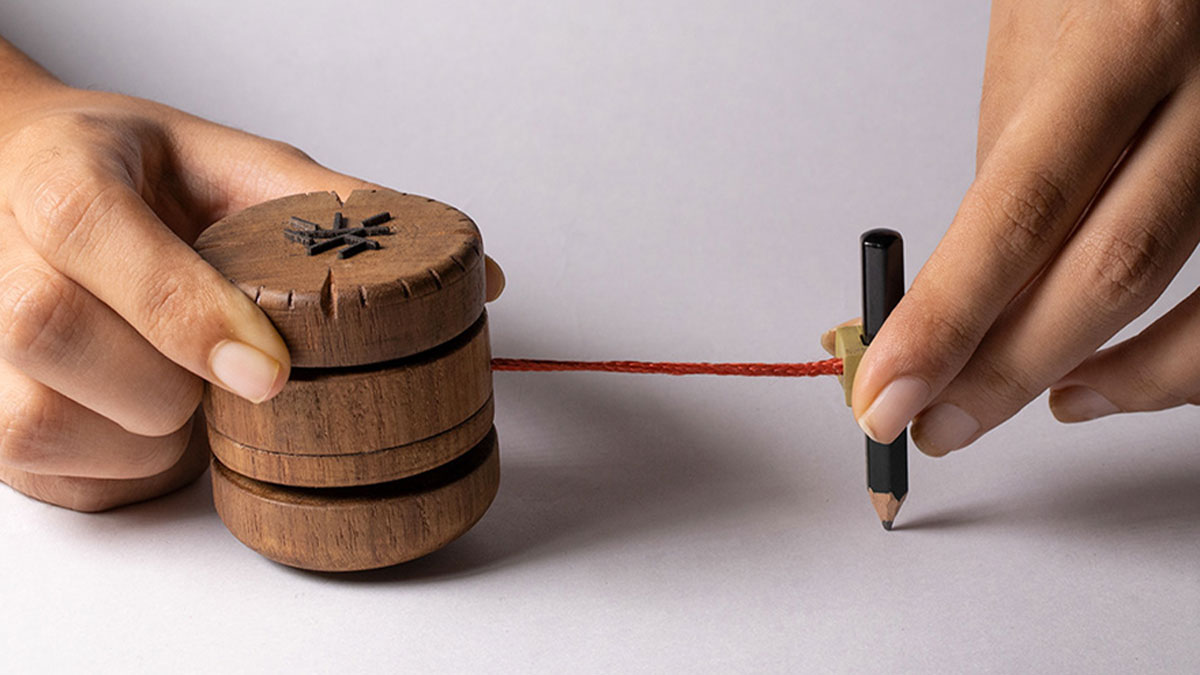 Yeah, I wondered the same thing. When you're done using this handsome ITO Japanese Compass to draw some perfect circles, can you use it to perfect your walk the dog and sleeper yo-yo tricks? Let's see...string...pencil...locking mechanism...ah, nope. The ITO Compass' thread extension locks in place when extended, and then retracts only when you manually release the mechanism.

Oh well. I'm more of a yo-yo than a geometry guy, but even if I never once used the ITO, it's a piece of art I'd happily include on my desktop display. Designed by Alfred Jerry and Lakshyta Gupta, the compass takes its name from the Japanese word for "thread," and was inspired by the mythology of the Red Thread of Fate.

Though believed to be Chinese in origin, Japanese culture also has a version of the red thread's story; it revolves - like an immaculately drawn circle! - around the idea that those destined to meet as true loves are connected by an invisible red cord tied to their fingers. How romantic! But what the ITO does romance have to do with a mathematical compass?

Well, it's a loose thread of a connection, but traditionally circle drawers used a pin and chalk connected by a string to get the job done. The ITO just sort of mashes the old myth and the old method together to make the compass' description sound as cool as its design and function look. Hmmm.

Circles symbolize unity, wholeness, totality. And also hidden, razor-sharp blades. At least when they're Vicious Circles, and come forth from the loins of Mantis Knives...

Paul Schatz discovered the oloid in 1929. Yes, discovered. It's not just some rando geometric shape or ergonomically designed fidget toy. The oloid is a real piece of the mathematics puzzle, and Patrick Schneider's OLOID...

Aside from a supersized fidget toy or a DIY project to do with the kids on a rainy Sunday afternoon there isn't a real practical reason to put together a Hyper Beads Kit. But once the rolling symbol of infinity is finished...

Orbiform follows the OLOID in what might be the next evolution of fidget and desktop toys: mathematical sculptures. Both the Orbiform and the OLOID are built according to real, albeit little discussed, geometric shapes...

Neko Cup Cat Mold - Put a Cat on It

Use a Neko Cup cat mold to build yourself a whole beach of sand CATsles. Maybe a nice Raspberry Ragdoll-O Salad. Or just use Morii Yuka's cute kitty molds as sculptures, beige, black, or white pieces of home decor that...

Shape Your Own Cake Silicone Molds

She-Ra: Princess of Power baked me a cake today. Custom-shaped using a set of link-and bend silicone molds like these. It's a yellow cake with chocolate chips, frosted in mint chocolate icing, and decorated with...I don't...

Get into the Octagon without getting bludgeoned and bruised up, or being stuck for the rest of your life with UFC ears. The Gingko Octagon One is a modern LED desk lamp whose swanky geometric shape is further enhanced...

World's. Coolest. Not an understatement. Take 10 seconds to watch the Fletcher Capstan expandable table video, and the rest of the day off work to recover from your blown mind. Or maybe you'll disagree that the mesmerizing...

The geometric Gomboc's shape supposedly mimics that of a radiated tortoise shell, and its movement that of the animal's when it rights itself without the use of its limbs. Now if that's the case, my question is: why would...

It's no Bird's Nest Bed, but I would 100% take a Kodama Zome over a Lotus Belle Tent on account of the fact that it is 100 times less likely to make someone say my least favorite word of the decade: "glamping." Th

The Trigmate is one of those kids' "toys" that is actually an educational tool. It's a tricky triggy! The wooden doohickey endeavors to teach them angles, length measurements, area, geometry, trigonometry, experiments...