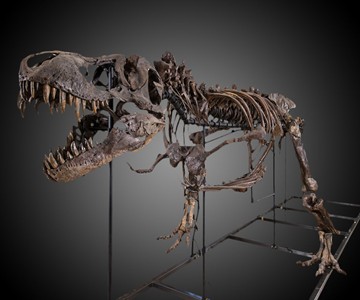 Meet Roosevelt. Your new pet T-Rex. Sure, he passed away a little while ago, and his remains have kinda been Frankensteined together from 3 different specimens, and his skeleton and skull are still only about 45% complete--oh, and he costs almost $2.4 million--but...come on. Roosevelt is like the dog at the pound. You go in "just to look." To appease your girlfriend. You insist you're not getting one. And then. You fall in love. You can't leave without him.

Roosevelt is ready to go to a loving, and incredibly wealthy, home thanks to Theropoda Expeditions, a commercial paleontological company that digs and assembles museum quality fossil specimens for both public and private purchasers. Roosevelt's discovery and recovery began in 2008 when Clayton Phipps found the initial T-Rex remains on his cousin's private ranch in Montana. In took until 2013 to dig out all of them, and Theropoda has arranged those bones here into part of Roosevelt's axial skeleton and pelvic area.

Also in 2013, Phipps found another partial Tyrannosaurus rex skeleton on another private Montana ranch. These bones complete Roosevelt's axial skeleton. His skull hails from remains dug up in Wyoming, as do some cervical ribs and vertebra portions of his hind legs. Theropoda Expeditions brought him to his current state in 2015, assembling and securing the bones on a custom steel armature.

David Maher of Citizen Bones Fishing emailed me to suggest his Humanoid (and Skeleton!) Fishing Lures for a product write up, and it reminded me of something: I get a lot of stupid, awful, and pushy product suggestions...

Spooky season is coming up, and these Inflatable Skeleton Lovers - the Boning Bones, if you will - are the perfect front yard decoration to, er, erect if you want to offend and piss off the Karens in your neighborhood...

Roll the bones, baby! No question why the term applies to these Skull Dice, but do you know why playing dice not stylized to look like human skulls is also referred to as playing "bones"? Yeah, me neither. You should...

When I first saw this Motorized Inflatable T-Rex Ride-On Pool Float I thought all my dreams had come true. T-Rex. Pool float. Able to tool around the water via joystick and zero effort on my part...

A skull glasses stand, now there's a clever accessory for your lensed accessories. Not to mention a sweet gift for your favorite bespectacled biology teacher, skull-loving goth, deathly cool rock star, or self-important...