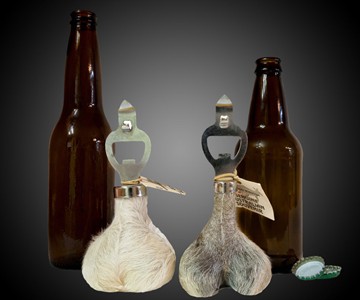 Want to be a true baller? Then grab that Triple IPA and crack it open with the scrotum of a Red Kangaroo. Or an Eastern Grey. Roo Balls turns (humanely and legally acquired*) castrated kangaroo bits into beer and wine bottle openers.

Supported by boxer briefs and the slogan "Grab a pair!" Roo Balls is the first company to gain clearance (and probably the only ever to ask) to peddle authentic kanga-sacks as barware in the US. Their 2 styles of bottle opener feature the pairs of a pair of Australian marsupial stars, the Red Kangaroo (Macropus rufus) and the Eastern Grey Kangaroo (Macropus giganteus). Both taxidermied nutsacks are Vagisoft and, well, awkwardly pleasing to the touch. I mean, you can't look these sets of furry balls and unknow that they're sets of furry balls, but if you could...for just a moment...you might find it extremely soothing to cup, cradle, and stroke them. I mean, I don't. At all. But you might.

Big Red Bottle Openers incorporate the Red Kangaroo's balls. This species is the largest of all kangaroos, with full, light fur that varies from longer and slightly curly to a more trim coat. Roo Balls has informed me that buyers are able to request "wild" or "roo scaped" nether regions in the Notes section of their Big Red check-out form. Eastern Grey Bottle Openers feature the smaller and more common of the two kangaroos. Fur on these berries is sparse and darker in color, with a higher likelihood of bald patches and the occasional prominent scar. In other words, the ballsier set of balls.

Roo Balls also uses the Eastern Grey scrotum as a base for their corkscrew wine bottle opener.

*All Roo Balls scrotums are sourced as by-products of the kangaroo meat industry in Australia. The Australian National Parks and Wildlife Service regulates and monitors animal acquisition and use. Roo Balls has also obtained export/import permits from the Australian and US governments to sell the bottle openers in the United States.

Testicuzzi - Jacuzzi for the Nuts

Sadly - or maybe thankfully? - there are no photos of the Testicuzzi in action. At least not any this jacuzzi for the nuts' makers have published publicly. But one look at the empty hot tub - its contoured rim, its dual...

Now here are some furry friends for you. And all your friends. The Cat Balls Calendar may be the premiere White Elephant and Dirty Santa gift for this holiday season. May be - we're only mid-November, dudes, so I'm just...

"Make 2021 the year of ballsex!" Well, balldo, it's not the worst idea anyone's ever had. Plus, given all the horrible things 2020 was the year of, and the lackluster way 2021 has kicked off, a brand new ball-dildo that...

I know what you're thinking: is that a push-up bra...for my balls? The answer is yes. The Ball Lifter was designed to lift and embellish your package without pumps, pills, or other male member enhancement quackery. It's...

Not much to add to these boxer briefs. Oh, except for a picture of your girl - girlfriend, wife, crush, black-hearted ex Karen - strategically placed at the crotchal region so as to look like she's hugging your cock &...

Need a Father's Day gift for a would-be dad? The CoolMen Testicle Cooling Device, despite sounding and looking like no more than an awesome jock strap for chilling your balls, exists in the name of fertility. It's a testicle...

What the H-E-D-C, Gerber? Don't tell me something's a "chonk" and then show me a picture of a pry bar instead of a big fat fatty cat, or particularly well-fed grizzly bear. I like multi-tools and sweet new pieces of EDC...