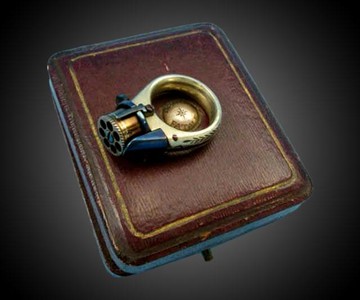 Ladies with a vendetta, or a penchant for jewelry that also serves as a weapon, I'm afraid you can't buy the Femme Fatale Ring Gun. (Unless the person who paid $11,350 for it at auction would be willing to sell it to you for $11,351.) But I thought this fully functional revolver for the finger was still worth featuring just for its novelty, fine craftsmanship, and James Bond badassness.

Crafted in Germany from a ring of silver and the vengeance of a scorned woman, the Femme Fatale has its name engraved with herringbone borders around the band. On top lies a girl's second best friend: a 7-shot, brown-finished cylinder with fold-down trigger and outer spring band. The revolvring also has a set of 7 cartridges and a mini screwdriver accompanying it. I hope whomever now owns it is taking full advantage of her ability to give deserving parties a new kind of finger.

Everyone else: if you've really, really got to have an itty bitty gun, here you go. The Berloque Pistol is not only for sale, but available for far less than the Femme Fatale's $11 grand price tag.

Jeff McWhinney designs wedding rings for men who move. Like a little more than from their desk to the john, the car to the house, and the couch to the fridge. Hikers, golfers, climbers, weight lifters, even really intense...

August 2013 Update: Thanks to crowdfunding campaigns, concept products are making their segues into reality much quicker these days. Two years ago, the Ring Clock emerged from a Moving Innovation challenge set forth by...

Want to feel close to a loved one far away? Or in the next room when it's too much work to get up off the couch? As part of their mission to "make the most personal connecting tools," TheTouch is finishing up development...

Moonglow Rings take minimalistic colored and metal bands on a trip through classic sci-fi adventures when the lights go out. Though Black Badger Advanced Composites' glow-in-the-dark finger decor comes from Sweden, not...

At this point you could put a different type of smart ring on every one of your fingers if you wanted. The NFC Ring is a programmable piece of smart jewelry you can wave around powerful wizard- or dismissive CEO-style...