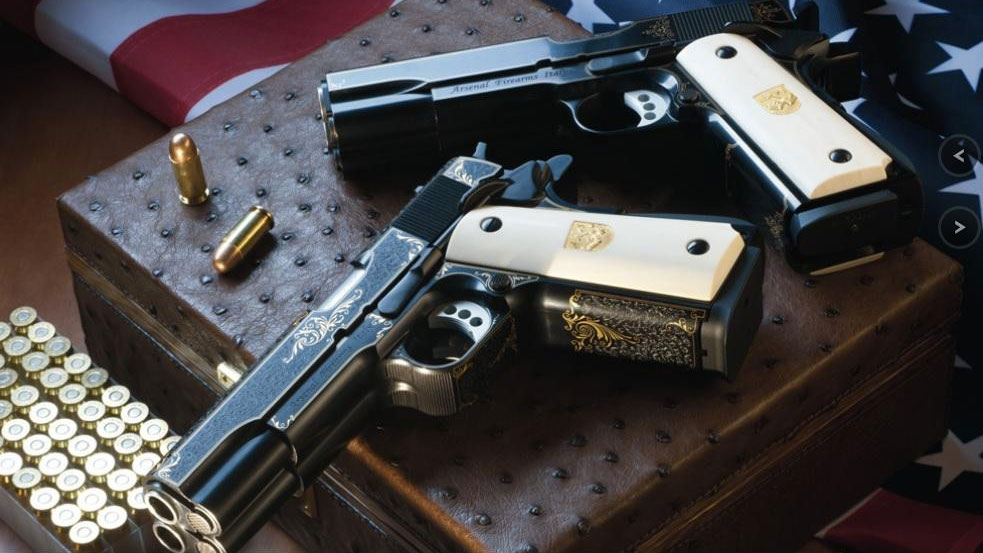 The AF2011-A1 Double Barrel Pistol is a first on two counts. It's the first ever double barrel semiautomatic pistol manufactured for sale (not available yet, but on deck for Fall 2012). And, after getting a load of the "Twenty Eleven's" sleek aesthetic and technical design, the gun will also represent the first argument the people who really, really want it are going to have with the people who say they can't have it.

Arsenal Firearms created the Double Barrel Pistol as a tribute to the Colt 1911-A1. In both visual splendor, and functionality and upkeep. Anyone able to shoot a .45 ACP will be versed in handling and firing the 2011. Arsenal Firearms maintains it will perform exceptionally in target shooting, bullseying 8 double rounds of single column magazines--16 bullets total--into a target the size of an orange at 15 yards away, and one the size of a watermelon at 25. Two bullets carry 460 grains of power and, when impacting at 1 to 2 inches apart, will knock down a bull. Though a few rounds may be necessary to take down a double-muscled Belgian Blue bull. Or a zombified Charlie Sheen. The entire 18-bullet tag team is expendable in about 3 seconds.

Once officially released, the pistol will come in buyers' choice of 2 independent triggers, and one sear group (left or right, with user-interchangeability for right or left operations), or 2 triggers permanently joined, and 1 or 2 sear groups. Formidable finishes include a mirrored deep blue, or a white ash nitrite coating with a 3400 Vickers surface hardness.

Most of the 2011's internal parts are interchangeable with the Colt 1911's. In term of replacement parts, these include:

Naturally, the Double Barrel version is also pimped out with some special parts, such as:

Check out the Arsenal Firearms Website for full technical specs, and keep checking back for pricing information, which they promise is coming soon. In the interim, impatient gun-toters can tide themselves over with the 357 Magnum Hair Dryer.

A real "blast" from the past. In a clever display of grooming irony, users shoot this vintage 357 Magnum Hair Dryer at their heads to avoid committing style suicide. We can see it now, the biggest public service campaign...

Ladies with a vendetta, or a penchant for jewelry that also serves as a weapon, I'm afraid you can't buy the Femme Fatale Ring Gun. (Unless the person who paid $11,350 for it at auction would be willing to sell it to...

Cabot Guns has forged a few big bangs into its Big Bang Pistol set. The matched left and right pair of 1911s aren't just two of a kind, the only two Cabot has and will ever build (bang!), they're two of a kind made entirely...

Looks like James Bond and Data from The Goonies are finally making good on that collaboration they've been talking about. What we have here is a smartwatch-controlled pistol. A gun that will fire only if it is within...

Gun Box has determined that your hand is the only thing that should stand between you and your gun. So buy a Gun Box, and not only will you get a weapon safe that opens exclusively in response to your personal RFID chip...