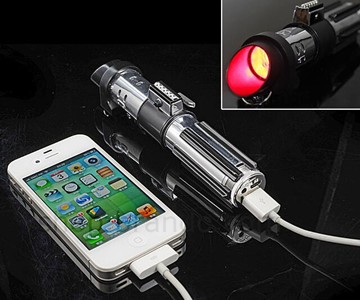 The Jedis may have the Force, but the Dark Side has power. Tons of it. Enough to take your iPhone, Android, or Windows mobile phone from dead to fully juiced and ready for battle. One round with the Darth Vader lightsaber portable battery charger and your furious text exchanges, Facebook trash talk, and heads of bok choy hurling towards zombies are back. Stronger...and slightly more nefarious...than ever.

This officially licensed Star Wars charger chose Vader over all others in the Galactic Republic/Empire to represent its power-up capabilities, and the end of the lightsaber replica has 4 LEDs that glow his signature red. The charger is also fitted with a lithium-ion battery carrying a 2800 mAh capacity. A simple on/off button activates charging once a device is plugged in. The lightsaber itself charges via micro-USB.

There's nothing particularly funny about the iWALK LinkPod Portable Charger, I can't not show some Fozzie the Bear love after seeing the name. So here goes: the LinkPod is a 4800mAh fast-charging power bank you can stuff...

I see what you're doing here, Shargeek. I mean, it's hard not to with the see-through shell around your STORM2 portable power bank revealing all its inner workings and charging capabilities...

While it sounds like something Batman would be called upon to save the world from, Brunton's Hydrogen Reactor is actually an innocuous, albeit robust, deliverer of power to portable devices. It's a piece of scientific...

I wish Saberforge would stop churning out new custom designs faster than I can squirrel away enough money from helping old ladies with groceries and skimming off the top of the church collection basket to buy them all...

Don't you worry, Zens Liberty Glass Edition Wireless Charger, I see you. I do. I see you on the outside and, thanks to your transparent tempered glass surface, I see the 16 copper charging coils you got on the inside...

With both Comic-Con 2012 and Dude's S3 Arctic Laser Giveaway in full swing, how could we not bring you this feast of power, this champion of Cosplay, this intergalactic harness of pure Storm Blue or Ghostbusters Green...

What a piece of junk! Actually, I have no idea how well this Star Wars Millennium Falcon Wireless Charge Pad works, or how cool (or junky) it looks in person, but that felt like the right line from the film series to...