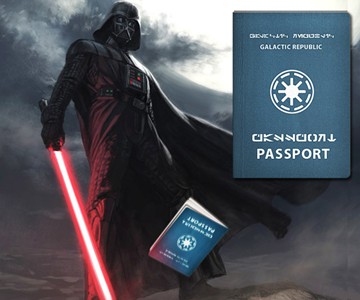 $99
from Make Me Passport »
Check It Out

Many of us used to think travel to and within the Galactic Republic was impossible due to its being make believe. But now we all know the truth that real Star Wars fans have always known: up until 2010, the Intergalactic Identity Management Agency simply hadn't cleared residents of Planet Earth for passports. And, of course, now that all of the appropriate paperwork has been filed, and procedures enacted, both Yoda and Obi-Wan are dead, and Han Solo is married to Ally McBeal! Argh! Typical web of bureaucratic malarkey ruining our lives.

Still, there may be some cool shit lingering in parts of the galaxy controlled by the Galactic Republic, and you'll need a Galactic Republic passport if you want to see any of it. Passports are issued to proven members of humanoid races, as listed in the Unified Register of Racial, and look similar to international travel documents for Planet Earth (and Planet Canada). Books are printed in Galactic Basic, with English translations. Inside covers include a photo of the passport holder, and his or her planet of origin, sex, and governing authority. Dates of birth, issue, and expiration in BBY years are also listed.

Meet the Starkiller, here to make you the star of a killer party...especially if you're hosting a bunch of Star Wars fans. The lamp and liquor dispenser from Rustic Design features industrial pipes, metal hardware, and...

Star Wars onesies for adults are what's called being comfortably chic on Halloween, and F'ing awesome the other 364 days of the year. Boba Fett, R2-D2, a stormtrooper, and the grandaddy of being the worst daddy of all...

See No Evil, Hear No Evil, Speak No Evil Stormtroopers

My favorite thing about these See No Evil, Hear No Evil, Speak No Evil Stormtrooper figurines - aside from the fact that we're talking about them on Star Wars Day - is the See No Evil Trooper who looks more like he's...

One good way to bring the Dark Side and the Light Side together is to get them all stoned. What, we're fighting? I'm trying to eradicate you from the galaxy? OK, well...why don't we order some deep dish pizzas...and a...

Vader's words, "The Force is strong with this one," run along a plaque on the front of the LEGO Star Wars Death Star Trench Run Diorama, completing the 665-brick project, and the sentiment this iconic scene from Star...

A stormtrooper who's packing nothing but Jameson and a Buttery Nipple is my kind of stormtrooper. I bet in whiskey decanter and suspended glass forms they're even a decent shot. At least until round 7 or 8 when your own...

No longer must you search the galaxy to find this Rebel Bass, but you will have to wait at least 3 months to get it. Last Fall, after photos of his custom Star Wars guitars had gone viral online, Englishman Doni opened...