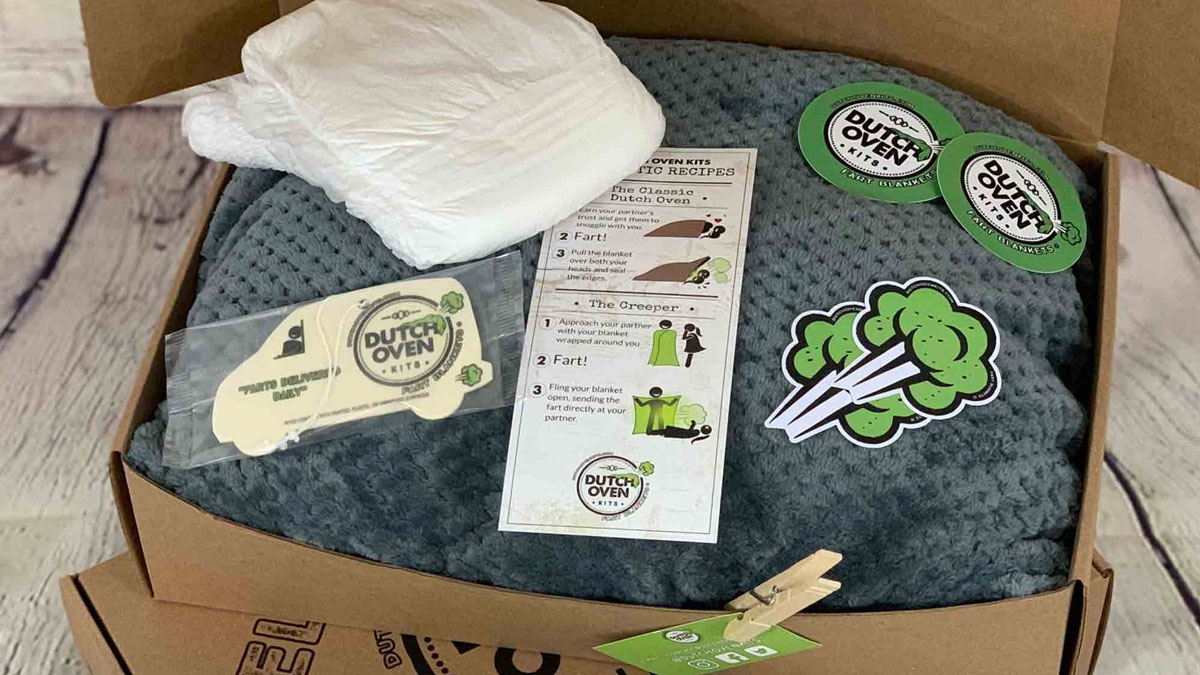 Nothing says, I love you to the fiercest farters in your life like a Deluxe Dutch Oven Kit. Hahaha, you might think, this is such a clever gag gift! Everyone's gonna have a good laugh at The Dude when he opens it, and we'll go around sharing stories of how we have all been blasted by his flatulence.

But the joke will be on you, gift-giver, when The Dude actually uses the Deluxe Dutch Oven Kit's Fart Blanket to cook up some real gourmet treats to ghost you with.

And by "ghost" I mean: 1) Casually let loose without sound or spectacle in the otherwise unoccupied room you're in, as if the stank bomb were released by a ghost; and 2) Open the lid to his dutch oven by pulling the Fart Blanket down over your head, thereby making you look like a costumed (and gagging) ghost. Boo! and Boo-ya!

Swimming Poo's STEAM blurb describes it as "a humorous action game," but that's about as full of crap as Swimming Poo itself. Humorous? If your favorite jokes start with "Pull my finger," or "So I was taking a dump the...

At printing, Subtle Butt Disposable Gas Neutralizers had 14 reviews on Amazon, and every single one of them contained both a serious critical analysis of the product's smell-quelling efficacy, and an insightful comment...

Windi the Gaspasser is one of those WTF products I as a childless dude saw and immediately thought was, in this order: a funny joke; a disgusting not-joke; a sad reality. You basically stick this little (un)plug in your...

The FartVac - Suck Up Smelly Farts Before They Escape

As excited as I know you all are to stick the FartVac up your butt in the name of sucking up smelly farts before they escape into the room, and noses of your family / date / coworkers / fellow citizens waiting at the...

Odafree is an over-the-counter supplement ingested to combat odors associated with the excretion of feces and flatulence. Without the euphemisms? It's a daily pill that claims to remove the stench of hot death from shit...

Good Sh*t: Holistic Guide to the Best Poop of Your Life

Now this is the kind of sh*t we need right now. The good sh*t. Even if it's just the literal kind, I'll take it. Good Sh*t: Your Holistic Guide to the Best Poop of Your Life endeavors to be your doula of deuce-dropping...

A personalized fart-thwarting candle. I know one household who needs this burning good scent blanket for the vile and death-dealing ones. Mine...

I'm not sure whether Shomer-Tec's Special Ingredients line of products are more prank or more spy. Maybe they fall somewhere in between. In case you're not familiar with these products, they come in vials filled with...

One time me and my friend Cornelius were having a philosophical discussion about farts. It went something like this: would you rather continue to anonymously fart farts that smell like something crawled up your butt and...

You probably think FoodMarble's AIRE is redundant. You know exactly what your digestive tract turns into a room-clearing onslaught of the fartsies. Beans. Beer. Looking at a bag of Taco Bell. But do you know why these...