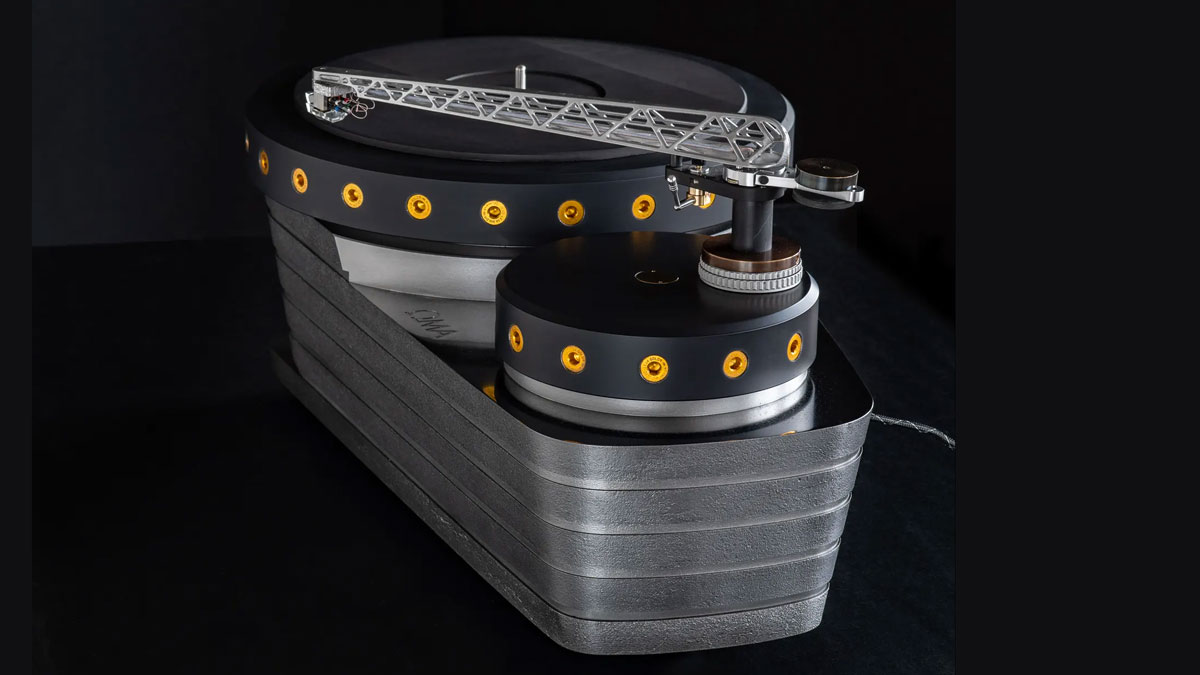 Oswalds Mill Audio spent 7 years on a mission "to create and redefine state of the art for vinyl playback." The result is a turntable that looks, to me, like a cross between brutalist architecture, 80s punk, and a construction crane (kudos go to Berlin's Frank Schroder for the tonearm). And that's not even the most interesting thing about the K3. That title goes to its cast iron chassis.

The turntable chassis is shaped from hypo eutectic gray iron with high graphite content, and then molded again on the inside with hollow chambers. OMA has filled those chambers with "special" liquid and other matter chosen for their abilities to dampen and absorb vibrations.

The K3 motor also demands attention - it's built from components the US military uses in their anti-ballistic missile defense systems, along with parts from nano manufacturing and photo lithography machines ,and deep space telescopes. OMA says the combination has produced "a motor more powerful than anything ever used on a turntable."

Metallica's Ninja Star Turntable, a collaboration with Pro-Ject Audio, brings back childhood memories of possibly being afraid of the song "Enter Sandman," and having a babysitter who always played it about 17 times throughout...

MAG-LEV Audio's ML1 levitating turntable gives vinyl enthusiasts a reason to keep their eyes open even as they get lost in their old Sex Pistols albums or throw on a Bob Marley record to chill with a fat joint on the...

To everything turn, turn, turn. And by "everything" I mean tight driveways, and by "turn, turn, turn" I mean up to 360 degrees into and out of them, courtesy of Driveway Turntables. A genius, no joke, no exaggeration...

This Christmas, give a turntable ring to your favorite 50-something frenemy along with a copy of A Visit from the Goon Squad, and grab a front row seat for the launch Mid-Life Crisis Part II. The record is even made of...

The Classic LP is a USB conversion turntable compatible with Macs & PCs. What's a turntable ye young whippersnappers ask? Well, back before music streaming services we bought something called MP3s to listen to music...

The Duo Deck is your portable purveyor of the sounds of classic vinyl and the mix tapes filled with love songs you wrote for Samantha Nester in the 9th grade, which she threw back at you through your open Toyota Tercel...

Question, Mr. Bish: does your Tear Mender adhesive work on all areas of fabric and leather textiles? Like say, for example, on the crotch of a pair of black leather pants that might have gotten ripped during an 80s theme...

Rock out with your cocktail out! Booze and Vinyl: A Spirited Guide to Great Music and Mixed Drinks is part stunning coffee table book, part curated bartender's manual, and part ticket book of front row seats to nostalgic...

We know records communicate a certain authenticity and legitimacy in the world of music aficionados, but vinyl is so easily scratched, and turntables are so difficult to bring on road trips. If you're going to cling to...

I saw this rubber cast iron skillet, a movie prop and excellent prank idea from NewRuleFX, and couldn't help but run it. After all, this weekend marked both the 92nd Academy Awards, and UFC 247, Jon Jones vs. Dominick...