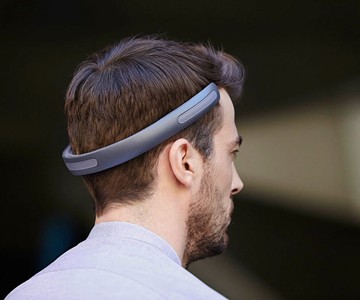 $125
from Studio Banana Things »
Check It Out

Batband is a headband that transmits sound through your skull bones. Think that sounds weird? And that the earless headphones look even weirder? Agreed, but...a few points:

In addition to getting their jollies out of designing a product that vibrates your bones with sound and looks like something we'd see on Star Trek, Studio Banana Things created Batband to enable people to listen to a "private soundscape" without blocking out the rest of the world. Seems counterintuitive, given that most people wear headphones to escape the rest of the world, but for cyclists, runners, even walking commuters who want to listen to music/audiobooks or take calls, keeping their ears free to hear horns, sirens, or people yelling that they dropped their granola bar could be pretty useful, and a good safety precaution.

To transmit sound, Batband incorporates three transducers, two that touch the temporal bones on the sides of your head, and one on the occipital bone at the back. Content you receive while wearing the device comes in clear but is virtually inaudible to others. The device itself is made of a spring steel outer frame for grip with an inner padded lining for comfort and sound insulation. Batband includes a microphone for taking calls and basic Play/Pause, Forward/Back controls on the side. It is USB-rechargeable.

Combining the ethos that nothing is scarier than one's own imagination with the ethos that creeping someone out to the cusp of a complete mental breakdown is great fun, we have...The Eviltron. That strange scratching...

GravaStar has some Sirius sci-fi and Sirius cyberpunk for audiophiles in their Sirius P5 Earbuds. The company says it's the first to offer interchangeable cases to house and charge wireless buds, and their debut line's...

BALMUDA The Speaker is BALMUDA's much-anticipated follow-up to BALMUDA The...Toaster? Huh. Who knew the experts on steaming bread into toast were also experts on acoustics? Wonder what paradoxical method BALMUDA uses...

Looks like Helmfon Jr. is playing with Daddy's noise-cancelling helmet again. Don't worry, kiddo, you'll grow into Darth Helmfon's sound absorber and privacy sphere soon enough. And then all the power of the Audibly Dark...

File it under "Prank." "Leg Up." "TCB." Or "Revenge." Shomer-Tec's Sonic Assault Electronic Disruption Device looks like no more than a nondescript gray box--a useless one, perhaps. You can even flip its switch and nothing...

Know what a Berkeley education gets you? The ability to mastermind genius ideas like cat ear headphones. And also the impeccable taste to select an incredibly hot Asian girl to model them. UC Berkeley alumni Wenqing Yan...

I always wear earplugs when I go out at night. Not only do they protect what little hearing I have left, but if someone ugly comes up and tries to talk to me they also give me an easy out: I just point at my ears, conjure...