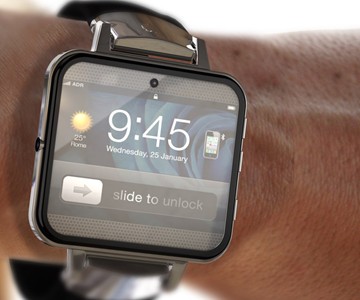 It's sleek, it's svelte, and it will make your wrist look a mile long. It even redefines the concept of little black box with its glide-to-reveal top lid. The iWatch 2 has all of the classic features of the iWatch: WiFi and Bluetooth compatibility; an integrated RSS reader; 32 GB of memory; an LCD projector for photo slideshows on iPhones and iPads; a weather forecasting system; and a frontal face camera. New circus acts of the 2.0 include: a polycarbonate main body; aluminum chassis; Kevlar insert; and 5 snazzy color choices for the rubberized band. We hear it even tells time!

At least, it would do all of these things if it were an actual, not just a theoretical, product. But, alas, designer Antonio De Rosa is perhaps the first person on earth to haul out a red carpet lined with 76 trombones to tout the 2.0 version of a concept. The iWatch 2 doesn't exist, and neither did the iWatch original when De Rosa debuted it two years ago. De Rosa is Italian. I feel like some sort of ethnic joke about putting your elbow grease where your loud, chain-smoking, constant carbo-loading mouth is might be befitting here, but...I'll just let it go. Because, whether true manifestation, or mere figment of imagination, the iWatch is phat. In that paper thin, streamlined, highly stylized way that makes you wonder what the F Apple has been doing coming out out with iPod Nanos and their accompanying clunky wristband cases, plus 18 almost imperceptible variants of the iPhone, when they have yet to touch the world of fashion and accessories. De Rosa needs to strike himself a production deal. Maybe he could team up with Miguel Caballero and make the screen bulletproof. Or Donatalla Versace to make it cancerously tanned and bejeweled.

Or maybe we the people must take action to make the iWatch a reality. Please, leave your comments and appeals on De Rosa's webpage, and, more importantly, write a letter to Apple CEO Tim Cook. Hell, write a letter to your congressman. To President Obama. Potential President Mitt Romney. And, for good measure, the Mormon Church of Latter Day Saints.

I don't have an Apple Watch, so I don't need a NightWatch Magnifying Clock Dock for my Apple Watch. But. My mama has an Apple Watch. And, based on the imprints of a square with rounded edges and a little dial sticking...

Dudes, do you feel time passing by? No? Well. You're either too young, or you've never touched a magnetic ball bearing watch before. The first one I ever saw, the Bradley Tactile Watch, was originally made with the blind...

August 2013 Update: Thanks to crowdfunding campaigns, concept products are making their segues into reality much quicker these days. Two years ago, the Ring Clock emerged from a Moving Innovation challenge set forth by...

Induction motors, X-ray experimentation, the world's first RC boat. Nikola Tesla's contributions to the world were numerous and thrilling during his nearly 6 decades of scientific pursuit in New York. So it's strange...

Although I'm largely an insensitive bastard, even I was puzzled to hear that visually impaired people currently have only 2 types of watches available to them: those that talk, and those with removable covers that allow...