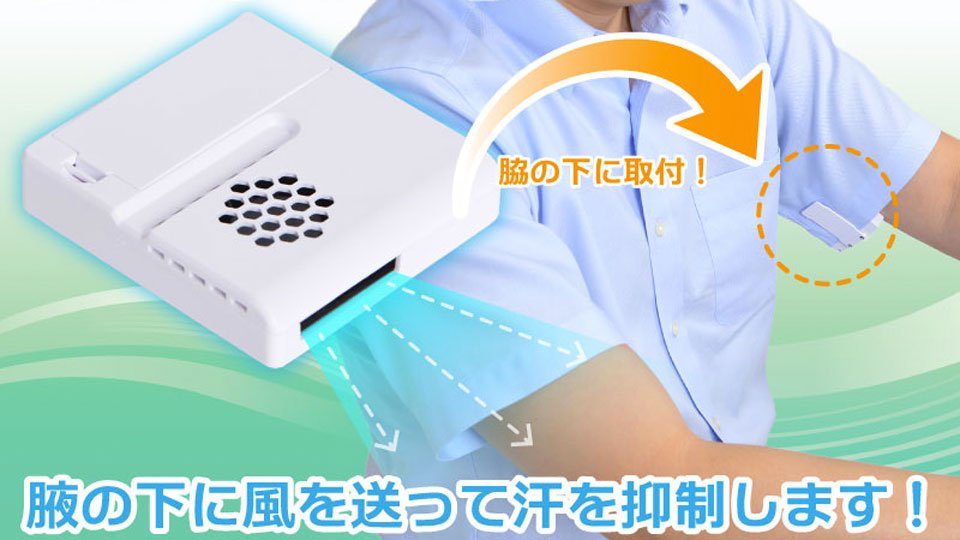 They say Summer Is Coming. And not six, 10-episode seasons from now. Like, next week. The Plains, Midwest, and South can expect scorching temperatures, stifling humidity, and lots and lots of armpit sweat.

Obviously these armpit air conditioners are straight outta Japan, and obviously they are ridiculous. I think I'd sooner take of my shirt in the middle of a job interview than risk the interviewer getting a glimpse, hearing the whirr, or maybe catching a whiff of the clip-on fans I have blowing into my armpits. I mean, unless the interviewer were Data from Goonies, in which case my armpit ACs and I would have the job nailed.

All of that said, the absurdity of electronic pit coolers is neither here nor there because vendor Thanko doesn't appear to ship them to American shores right now. So if things really heat up to armpit fan levels of misery for you this summer, I recommend an Aros Smart AC, or even a Flexi Freeze Ice Vest for some relief instead.

Waterlogged ears from swimming or showering? Sweaty canals from a tough workout? Victim of yet another Wet Willy? The DearBuds SE is a wearable ear dehumidifier that is, first of all, not a joke, and, second of all, designed...

It's what's on the inside that counts, right? The Crua Culla Maxx is a temperature-regulating inner tent that keeps you warm while camping on cold nights, or cool while camping on warm ones...

I'm summer lovin' these 13 cool summer products in black, and not a-one of them is named Danny Zuko. (And I still say Sandy deserved better. Ladies, you shouldn't have to change yourself into a skin-tight-leather clad...

Your kid in a boxing fight versus a giant kangaroo. Now that sounds like a losing battle. BigMouth Toys has even given their kangaroo - Kangaroo Jack - a pair of boxing gloves and the ability to shoot a 360-degree spinning...

Now this is the kind of coiled, hissing, spitting cobra I like. The kind that coils attentively near my sweating brow, and hisses and spits a cool and continuous mist of water my way. Orbit's Flex Cobra Portable Mist...

Nothing like the thought of pelting my friend Cornelius with a Spyra One water bullet to get me amped up on this Tuesday afternoon! Well, that and tacos. The Spyra One calls itself a next-gen water gun, a battle toy that...

Granted, when it's hotter than a dragon's undercarriage out and I'm tasked with sleeping through the night, I don't really care if the air-circulating device that makes that possible looks like Jabba the Hutt's butt crack...

The SpyraLX mechanical water blaster is a next-generation...regression, if you will...of Spyra's SpyraOne and SpyraTwo water bullet water guns. The originals are most excellent weapons of mass pelting and drenching, able...

Cool off with some hot pants. Daisy Duke's got nothing on these Jean Shorts Swim Trunks. More like swim briefs, really, as the faux denim suit is ready to show off your sweet ass and your formidable junk with equal skin...

Shark Week may delight you only one week a year, but these versatile Shark Pool, Beach & Shower Sandals will bring joy throughout all 52 of them. Wear the unisex sandals to the beach or pool during the summer months...

Suck it, bloodsuckers! The Biogents Mosquitaire CO2 outdoor mosquito trap is a scientifically-researched, German-engineered solution to bug bites, and their ruining of your backyard BBQs and summer evenings on the patio...