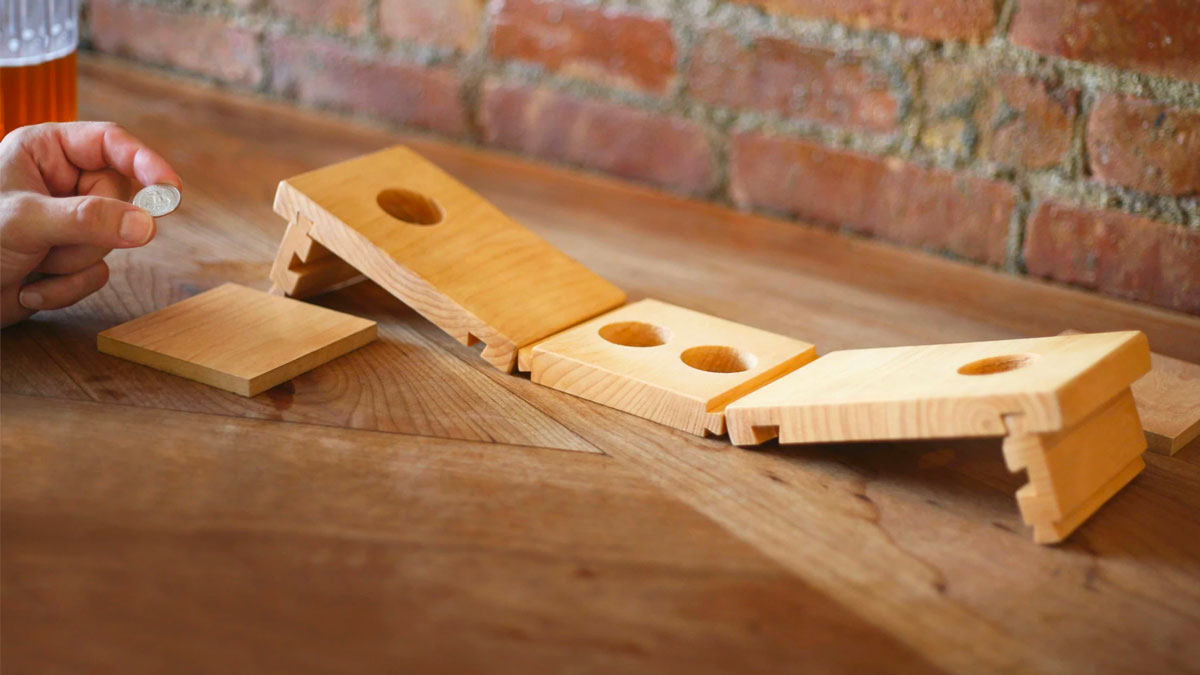 In today's world, The Change Game could mean anything. A TikTok challenge that times who can change from work clothes to sweats the fastest (in honor of and sympathy with those of us returning to our offices.) A bit of CV Dazzle trickery. A Find Your True Gender test. But this Change Game from We Play Change keeps it all much simpler than that. The self-described "next level quarters game" is a portable wooden tabletop set that requires no phone, no social media, no apps, and no WiFi, just a single quarter and a single player to make a good time.

The folding wood blocks of The Change Game allow you to play the game in a variety of ways, and create custom challenges to suit your level of skill, and the number of players involved. In addition to playing solo, you can also play The Change Game with a friend, or a whole group of people. The Change Game catalogue currently contains a dozen different game setups, some with pieces arranged into miniature versions of other popular party games, such as Cornhole, Skee-ball, football, basketball, and baseball.

The Change Game set weighs around 1 pound, and is small enough to fit in your hand. The two included "launch pads" create a hard, stable surface that allow you bounce quarters from anywhere.

The people who make these double-sided quarters repeatedly refer to it as "real," and I can't really...oh boy, this line is so applicable!...make heads or tails of what they mean by that. What real quarter has both sides...

Now here's a new twist to the swear jar - a digital money-counting piggy bank that will let you know exactly how much all the sh*ts and f*cks you've given have cost you. Sounds like the perfect gift for teens - or gift...

George Washington has been picked to rock out. And I'm not even recapping a scene from the next installment of Bill and Ted's Excellent Adventure. Which Keanu is one zero away from agreeing to, given that he hasn't had...

They say Penda C86-TPX Tailgate Pong is the second best thing you can do when you park your truck...

Oooo, da ball's flyin' back at my face. Better punch it again or it's gonna fall! The OODA Ball combines the weight of a medicine ball, with the tactile sensation of a boxing bag, with the bounceback-right-at-your-kisser...