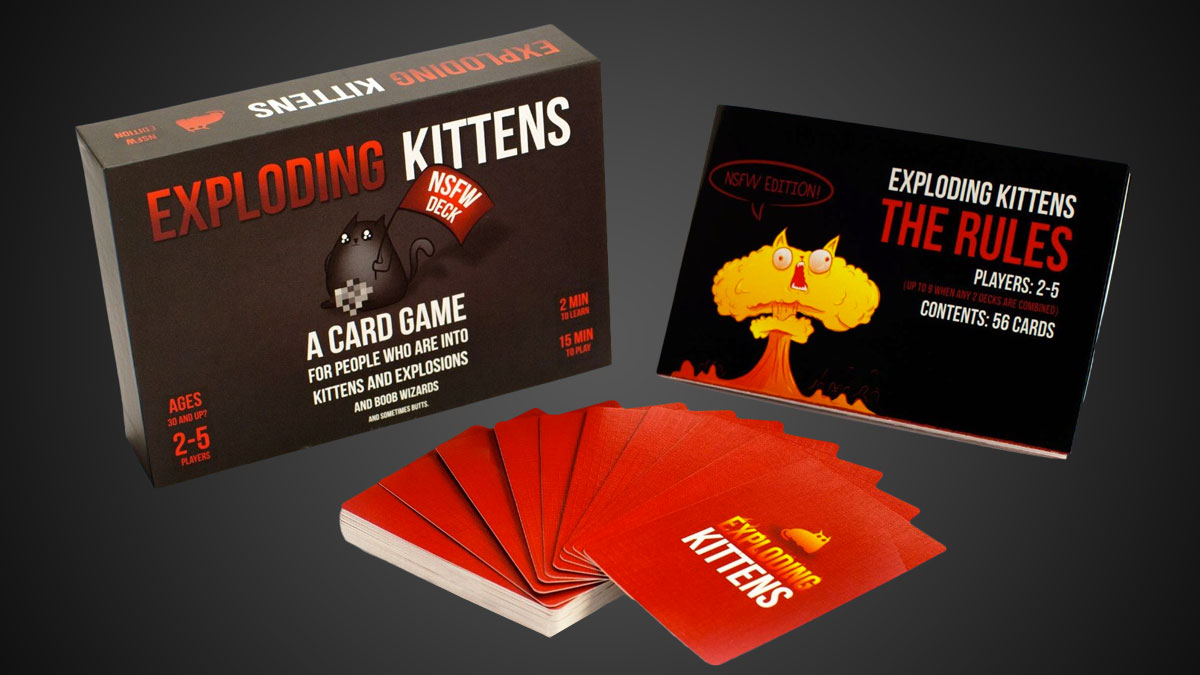 Unlike run-of-the-mill kitten explosions, Exploding Kittens: NSFW Edition contains content that is not suitable for your workplace or children. And even though no one seems to be saying it, I'm guessing a card game featuring cats going BOOM! is not appropriate for your kittens either. Unless you're trying to teach them a lesson.

Exploding Kittens: NSFW Edition is for anyone who is "into kittens and explosions and boob wizards and sometimes butts." Basic gameplay entails players drawing cards until someone gets the Exploding Kitten, which takes him out in a ball of fire and fur with it. ... Unless! ... If the bomb-drawer has a Defuse card, he can save himself, and the ticking feline, using sophisticated Bond tools such as laser pointers and belly rubs. All Exploding Kittens cards that aren't exploding kittens serve to move, deactivate, or get the F away from them.

What makes the NSFW edition of the game NSFW is its delightfully crude, obnoxious, and politically incorrect artwork. Expect everything from farts to fornication. Expect a good time.

That's it, Petvation, it was one thing when the government was coming for me with their facial recognition technology, but my cat is where I draw the line! Leave Zanzibar out of this! ... Though, I mean, an automatic...

The Ashera is possibly the only cat that is acceptable for a single male to own. Because it's about the size of an ocelot, and weighs 30 freakin' pounds. And that's 30 pounds of genetically-gifted muscle, not 30 pounds...

Quick, someone get this cat a lance! He's scheduled to joust one of the guinea pigs from G-Force at high noon and only just finished his battle armor fitting. I don't know if he's ready for this. The pigs have been training...

I doubt this UFO Cat Litter Box is going to be the most functional and high-performing litter box you ever own, but it sure as cat sh- is gonna be the most out of this world...

Think your chess skills are the cat's meow? That your opponent is barking up the wrong tree...or scratching up the wrong post...saying they can beat you? Then put your feline kings and canine queens where your mouth is...

Whoa. Talk about an augmented reality arcade game. These cats aren't just 3D, they're eerily lifelike, from their bright eyes to their swishing tails to their fur that...actually feels like fur! Holy...oh. Wait. These...

Watch your cat have a ball with this spinning catch scratcher toy. Available in 2 sizes, the natural sisal ball adds another dimension of interest and satisfaction for your kitty and its claws mounted to a triangular...

Watermelons. You poor bastards. Always on the receiving end of novelty weapon violence. The Gotcha Cap. The Unbreakable Slugger Umbrella. The <a href="https://www.dudeiwantthat.com/gear/weapons/blade-driver-crossbow.a

You & Your Pet Custom Portrait

It takes no stretch of the imagination these days to believe someone created an easy way to make custom portraits of you and your pet. The technology is there. The availability of Photoshop is there. And, for better or...