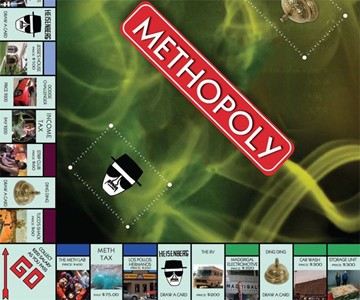 Joanne Silverman loves meth. Just kidding. She loves Breaking Bad. I mean, I guess she might love meth too, but probably not because if she did it is unlikely she would have the wherewithal to conceive and create this outstanding Methopoly board and accompanying playing cards in honor of sirs Heisenberg and Pinkman. And she definitely wouldn't be offering it as a set of downloadable, printable PDFs at the bargain price of FREE. Because no matter how strung out, a meth head would never bypass the opportunity to make some money to buy more meth. So yeah, Joanne Silverman. Thumbs up to Breaking Bad, thumbs down to meth.

The Methopoly set includes files for its very Bad board, Property Cards, Bell Cards (replacing Monopoly Chance Cards), and Heisenberg Cards (replacing Community Chest cards). Board locations highlight memorable spots from all 5 (up to this point) seasons of the series, such as the Schrader Home ($240), Los Pollos Hermanos ($350), and, of course, the Meth Lab ($400). Silverman suggests subsidizing the game's non-printable components with money, houses, and hotels from any non-virtual Monopoly. Playing pieces are transferrable too, but real fans will more likely start collecting Breaking Bad-themed miniatures also for sale around the Internet instead. A little blue crystal, a tiny Walter, a hand-blown glass chemistry set with penny-sized flasks and cylinders.

Silverman makes complete instructions for Methopoly download and assembly available here, and hopes those who take the non-literal foray into bathtub-based drug culture will comment about their experience here.

December 2013 Update: Unfortunately Methopoly creator Joanne Silverman received a Cease & Desist order from Hasbro for copyright and trademark infringement and can no longer provide the game files. Pttthh to Hasbro.

Having trouble getting ice time...on the curling rink? Worry not, because the Curling Zone indoor curling game brings the Olympic sport's laser precision and watching-paint-dry excitement right to your living room! The...

In today's world, The Change Game could mean anything. A TikTok challenge that times who can change from work clothes to sweats the fastest (in honor of and sympathy with those of us returning to our offices.) A bit of...

Worn, signed, and sweated upon by Bryan Cranston himself. Also mingled in: the DNA of Jimmy Fallon and Common, whom the Breaking Bad star let take a turn in this Landon Meier Hyperflesh Walter White mask at Comic-Con...