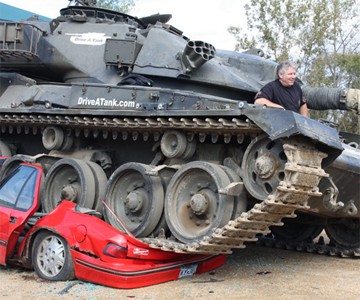 Tank camp? Oh boy, I've been looking for an excuse to go to Kasota, Minnesota! The Drive a Tank family owns and operates this adrenaline-jacking experience 90 minutes outside of Minneapolis, during which participants can not only tour, explore, and pet a host of US and imported British military-mobiles, but get behind the wheel and take a spin in one too. And for a few extra Benjamins, further enhance the roar of testosterone with the opportunity to crush a car or two under the beastly bulk of the tanks.

Drive a Tank rolls out two main packages for combat vehicle enthusiasts to choose from. The 3-Star Lieutenant General experience includes a lap around the scenic wooded grounds driving an FV433 Abbot SPG, plus the opportunity to fire one historic machine gun. Admission for up to two additional, tank-riding (but not driving) friends is another $45 each. The next echelon package, the 4-Star General, includes the driver's 2 friends, plus a second lap around the course, the latter in a different tank, the FV432 Trojan APC, which also has a periscope for simulating a combat driving situation. Three machine guns await test firing at the end of the ride.

Those seeking an even more impactful experience can add on single or double car crush adventures ($549 and $749 respectively), during which drivers will literally plow over a basically intact street car, feeling the shattering of glass and crunch of metal as it crumbles beneath them.

Drive a Tank participants must be at least 14 years old and 5' tall. Events last 3 to 5 hours, and begin with safety and tank navigation training and acclimation. Flip flops and high heels are not allowed. I can't believe they have to say that. Purchased vouchers are valid for 2 years.

So, are you really down to do it? Really, really down? Then start booking your flights and hotels. Drive a Tank even has some airport and accommodations suggestions here. Sorry, these do not include pickup by an F-22 Raptor or passing out in the tank.

If you're looking to stab someone in the back, knife them in the heart, or just royally screw them over, Microtech's MCT1057 Jagdkommando fixed blade knife is the definitive way to do it. A version of the manufacturer's...

Conquest purports to marry "ultra-luxurious" with "fully-armored" in its forthcoming handcrafted SUV, the Knight XV. Historically, this type of marriage has not ended well (see: the reigns of Louis XVI and Marie Antoinette;...

I know. If you're not military, law enforcement, or a first responder you can't have a TEC Torch handheld breaching saber tool, but, dude, you can still want it. TEC Torch uses thermal magic, specifically a concoction...

I'm not calling this compilation Unique Gifts for Military Men to dog the ladies. I respect and admire all the fine soldiers and veterans, male and female alike, who have poured their bodies, minds, and years of their...

I've seen human pack mules, but before the Load Trainer I'd never seen human weight racks. In this military-meets-Crossfit piece of fitness equipment, Innovative Performance mounts a weight plate post attachment to an...