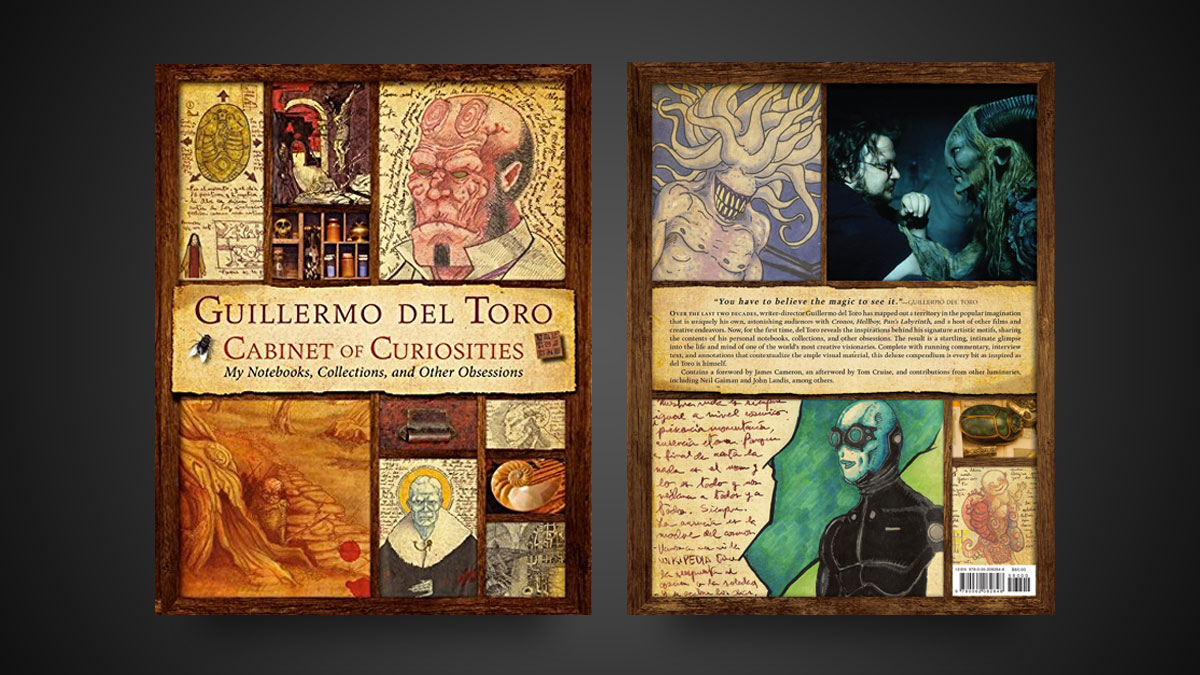 Guillermo del Toro Cabinet of Curiosities: My Notebooks, Collections, and Other Obsessions sounds like a fascinating, even thrilling piece to read...if you know Spanish. And cursive. Yes, of course the acclaimed director's notebooks - which reflect his insane imagination just as much as his films do - are narrated in English, but the original copies of his own handwriting might be the coolest part of owning the volume. And naturally they are in del Toro's native tongue, and his own unique script.

Actually, I take that back. del Toro seems to alternate between Spanish and English in parts of the notebooks. I see one page with a block of Spanish writing to start, but halfway down it turns into, "Did you know that every cell phone now has a damn camera? Every one of them. And they're pretty good too. You can imagine what that does to us? To our budget?" Good insight, Guillermo. I know what it did to my budget: Hasta luego, 35mm film for $8.95 a roll!

For those who wonder what the Hellboy goes on inside the mind of the writer / director of fantastical films from Pan's Labyrinth to The Shape of Water, Guillermo del Toro Cabinet of Curiosities shows some of the inspirations, thoughts, and personal obsessions that feed his creativity, and that led to his development acclaimed and cult classic films.

The notebooks include running commentary, interview text, and annotations that contextualize photographs and drawings. James Cameron wrote the foreword and Tom Cruise the afterword, so you know the weirdness of this Guillermo de Toro notebook collection holds from the very first word to the very last.

Thorns In - The Glove You Can't Take Off

The 16 unique & quirky gifts are not one of a kind, but they're still unique in their ability to delight, excite, and stand out from the pile of gifts your favorite nephew will receive from all his other relatives, or...

Several years ago, Willy Wonka sat down with the UK's most distinguished chocolatiers to lay down the next big release in artisan chocolate. He tried many of their stunning and revolutionary manipulations of the finest...

First published in 1981, the radically strange and unparalleled Codex Seraphinianus took Italian architect, illustrator, and industrial designer Luigi Serafini 2-1/2 years to complete. What is it? Aside from floating...

It may still stink, but ingest a couple of these 24K capsules, and your shit will look as handsome as a pile of gold. Tobias Wong and J.A.R.K. (Ju$t Another Rich Kid) created the Gold Pills as part of their INDULGENCE...

Stay organized...even if you're all thumbs with a set of Realistic Human Thumb Tacks from This Is Michie's Shop. The push pins are hand-sculpted from polymer clay, so no actual human thumbs were harmed in their making...

Things That Make You Go Ewww

Take a quick scan through this collection of things that make you go Ewww, and see if you can pick out a pattern. Or maybe it's better to say pick out, pop out, suck out, blow out, or stroke out pattern. Any guesses?...

18 Fun & Quirky Gifts Everyone Will Be Talking About

Some of these 18 fun & quirky gifts everyone will be talking about could double as White Elephant or Dirty Santa gifts, but most are legit presents for the holidays that are just a little less mainstream. And while you'll...

Quirky Gifts Everyone Will Be Talking About

While some of these quirky gifts could be considered white elephant gift contenders, most of them aren't, or at least aren't intended to be, gag gifts. They're just deliberately a little left of center. They proudly march...

The main challenge with showing you the 10 Weirdest Japanese Products is showing just ten weird Japanese inventions. I found dozens. And if I could read a lick of Japanese and was able to browse dot jp websites, I'd probably...

Can you smell what The Rocktopus is cooking?! Mmmm, pulpo a la plancha...

Swallowable Parfum is a capsule that, when ingested, releases perfumed scents through its host's pores. So instead of spritzing dewy showers of juniper and orange blossom onto your body, you'll be able to sweat aromatic...