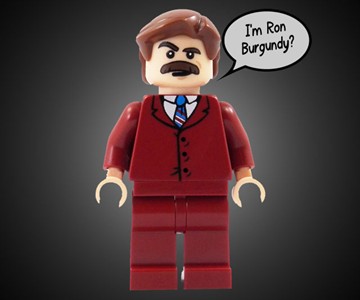 I love scotch. Scotchy, scotch, scotch. Here it goes down, down into my belly.... I don't know what I like more: that Etsy vendor Albert Hernandi of miniBIGS made a LEGO Ron Burgundy minifig, or that he made a LEGO Scotch bottle to accompany the bricked-out version of America's favorite anchorman.

While not an official LEGO product, Ron Burgundy's minifigure is indeed made from LEGO parts. Which Ron would probably prefer anyway since people who are kind of a big deal tend to eschew categorization under massive, umbrella entities that overshadow their individual identities and, in turn, challenge their self-importance.

Also, although this miniature Ron looks a little like a baby, I assure he is not a baby, he is a man. He is an anchorman.

At printing, LEGO Burgundies were available for pre-order, with shipment beginning the first week of December 2013.

A Crotch Staring Cat with swappable crotch parts? Being a reluctant, yet attentive, cat owner, I can say this toy from Chinese cartoonist QianLi Ma is not based on real life. At least not in my experience. Now a Crotch...

Just when you thought your Cup Noodles and microwave Ramen couldn't get any sexier, the geniuses at the Japanese brand FuRyu went and made this series of instant noodle lid stopper figurines. The ladies range in appearance...

LEGO my head! Your personalized LEGO minifigure awaits, at least from the neck up, courtesy of your submitted photos and Funky 3D Faces' 3D printing skills. The Etsy shop will transform any man, woman, or child submitted...

Sex Panther Cologne, the fictitious cologne from the movie Anchorman has become a reality. I've heard that a certain percentage of the time this stuff works every time. That's what I've heard. I'm not sure what those...

After I saw Jurassic Park as a kid, I thought Dr. Ian Malcolm, and by proxy Jeff Goldblum, was The Man. Then I saw him on Hot Ones last season, eating vegan chicken wings and talking about how his voice doctor said he...

The Tot! Yet another precious name for The Mandalorian's Baby Yoda / The Child / Grogu. And joining The Tot in this latest piece of Star Wars Potato Head merch: Mando himself as The Yamdalorian...

Outstanding. Not just that it's a life-size Mark 42 statue from Iron Man 3, but that whomever forged it deemed "life-size" to mean "Robert Downey Jr.-size", which is actually more like garden gnome-size. Good thing Iron...

I had forgotten I started working on this Hannibal Lecter Action Figure post and left my computer for a few hours to eat some sloppy joes and self-serve fro yo, and when I came back I was looking right into the muzzled...

I see your face on a wedding cake topper, and raise you your face on a Joker action figure. Have people always complimented your Batman-esque jawline? Admired your Superman benevolence? Bowed to your biting Joker wit?...

I bet I know what's been missing from your Christmas mornings: profanity. Lots and lots of profanity. And also Quentin Tarantino (which might explain the lack of profanity). Well guess what, dudes, thanks to toymaker...

SN Herder has thought a lot about the Force awakening. So much that his mind went...there. First the gutter, and then the toy bin. Herder says he made The Extremely Unofficial and Highly Unauthorized Star Wars Kama Sutra...