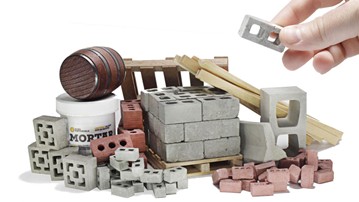 When I say these are "unique" Father's Day gift ideas, I mean it. I put an actual modicum of effort sorting through all the typical, bland "Dad stuff," and rather than your standard 12-pack of golf balls (or 12-pack of beer) and random fishing lure suggestions, I've tried to come up with some gift ideas that might better reflect your dad's interests and hobbies, and the kind of man he is. Gift ideas that will show him you put some real thought into your purchase. And, most importantly, gift ideas that will make you look better than your siblings.

Note: Gifts for Dad prices are listed as they were at printing. Prices are subject to change.

It will cost you a pretty penny to give Dad the gift of floating a beer with a Levitating X. But if he's really into his brews, and you're really into the 6 figures of the corporate world, this hovering, spinning spectacle of a beer cup might be worth the investment.

Equal parts functional and display piece, the Levitating X Beer Cup shows off 12 ounces of suds while floating atop a wireless magnetic base. The cup itself is made of shatterproof faux glass, in case someone gets clever, or clumsy, in its presence. You can apply the Levitating X treatment to cocktails, liquor, coffee, or even ice cream if you want too. A floating beer float perhaps?

Keeps spirits chilled without watering them down. Whiskey Wedge sets include a Double-Old Fashioned Whiskey Glass and a silicone mold. To use, add water to the glass, insert the mold, and then freeze the ice into a glacier-esque wedge. The resultant reduced surface area will slow down its melting process and, presumably, improve the overall experience of on the rocks consumption.

One Skull Shaving Brush here to help you wipe that stubble...and that smile...and that skin and tissue right off your face. Handmade in Italy by Goth Chic Accessories, this wicked brush foams shaving cream and paints faces ready for shearing with a dense mohawk of fine badger hair. Its skullified handle is carved from synthetic ivory.

This isn't just a scaled down drop saw model for your doll house. H-King's DIY kit assembles into a fully functional mini drop saw, complete with an 80mm saw blade and brushed 12V motor. Dad can even use it to build finishes and furniture for your kid's doll house.

The Rake Assassin is good for dads who harvest potatoes, plus dads who like (or are forced by moms) to do a lot more than harvest potatoes. As a rake / shovel combo tool, it rakes, collects, skims, sifts, dumps, and hauls almost any landscape feature or encroacher (e.g., dead leaves, gravel, poop, park, beach, or pond trash.) It has polypropylene teeth that bend a little, but not too much, and the rake head attaches to a lightweight powder coated aluminum shaft with a plastic D-handle. Overall rake length is 58" and weight 1.75 pounds.
$50 ➠ Amazon

LEGO Ship in a Bottle

Jake Sadovich, LEGO fan turned creator, I approve of your brain's inner workings. The LEGO Ship in a Bottle set started selling in February 2018, thanks to the 10,000 LEGO Ideas qualifying votes Sadovich got for his design. LEGO Ship in A Bottle pieces include a brick-built bottle, ship, and display stand. The bottle's cork is itself buildable too, including a wax-seal-style flourish to add further detail to an already comprehensive set. And when you're ready to seal your LEGO ship inside its bottle, don't forget to scatter the 280 brick of clear blue "water" underneath it.

The LEGO ship includes a raised deck at the stern, captain's quarters, 6 cannons, 3 masts, a crow's nest, printed sails, and the ship's flag. After she's taken shape, you can call her "Leviathan," as per the nameplate on the stand. And if no one can remember "Leviathan," "Boaty McBoatface" always works too.

Marc Liss hand makes his Japanese kiridashi pocket knives, or dashis, from recycled files. He says, amongst knife makers, files are considered to be forged from some of the best steel there is, often 1095 or W1. So in revamping the old into the shiny new Liss has created a nod to a traditional Japanese design that should be as useful and practical as it is mighty nice to look at. Mighty nice indeed.

For an olden days dad, this woodpecker door knocker will make his day. It has a pull cord attached to the spring-mounted birdie, and when you give it a yank, knock, knock, knock. Adorable!

The woodpecker door knocker comes as a DIY kit, a bonus if Dad likes assembling things, and a fun (and beer- and profanity-filled!) project for both of you if he doesn't.

Hey Dad, I got you a smartphone screen magnifier! Happy Father's Day, ya blind ol' bat!

Not just a reading glasses substitute for those whose eyes ain't what they used to be, this magnification glass and stand set for mobile phones enhances the viewing experience for anyone who's watching a video or movie on the (really) small screen, or forcing others to crowd around their phone to look at baby photos. The phone screen magnifier enlarges display images by 2 to 4 times, and, according to maker Oct17, sits at an optimal viewing angle on its foldable stand.

Whosoever holds this hammer, if he be worthy, shall possess the power of...Tim the Tool Man Taylor. Or Bob Vila. The Tool Set obviously arrives housed in a case molded to look like Mjolnir, but in this iteration of Thor's Hammer, pounding down Loki will come in the form of using the 44-piece tool set inside to, uh, remodel and flip a house faster than your nemesis in the 2.0, Marvel version of Property Brothers.

Part of BBQ celeb chef Heston Blumenthal's Everdure line, the Fusion Grill aims to deliver "the flavor of charcoal grilling with the ease and speed of gas grilling." It loads with charcoal, but rather than you standing there with a wand lighter and a BBQ Dragon trying to heat up the coals in 95-degree weather, the Fusion Grill's fast flame ignition sparks an electrical element to start heating them fast and even for you.

The Fusion Grill says it can go from Cold to Let's Cook in 10 minutes.

Use this cast iron shrimp grill and serving pan to cook shrimp on the barbie, and you'll have a much better chance of eating shrimp off the barbie. The sturdy slab has cutouts for up to 22 jumbo shrimp, which it says it will grill to perfection in a "pool of flavor," without sacrificing a single crustacean to the abyss between the grill grates, or to the sticky, greedy skin of the grates themselves.

What if Darth Vader had been a good dad? Or even had just announced his paternity to Luke sometime before he got into that imminent death predicament? Darth Vader and Son not only speculates on this topic, but does so with minimal words and maximal full-color drawings, so we can all absorb the hilarity of the idea without having to comb through some geek's rambling tome about a possible alternate Star Wars reality.

All those times Dad made you pull his finger and told your dates fart jokes? Joker Greeting has some retribution for you. Explosive, extensive retribution, disguised as a thoughtful gift. Happy Father's Day, Pops. Pull my card!

Joker Greeting's Father's Day Card, like most of their line of paper well wishes, has a built-in sound device Dad will activate when he opens it. It plays farts. Lots and lots of loud, juicy farts. Forever. Or at least long enough that forever seems like a possibility.

The Dadbag beer belly fanny pack is right up there with the Sexy Chest Swimsuit in its ability to create a fiesta of discomfort, with a few streamers of sick fascination, before my eyes.

But the Dadbag might top that disturbing oddity because it adds a layer of practicality to the design. As a functional fanny pack, Dad's not limited to the beach / YMCA pool and costume parties to make logical and appropriate use of his hairy gut. With a zippered pouch large enough to hold keys, wallet, phone, a can of beer, and other EDC necessities, the Dadbag has the useful longevity to hit the office in the morning, happy hour at 5, and then dinner with the whole fam damily later that night.

When the boss questions your productivity and asks for some more constructive contributions at the office...pull out a Mini Materials Ultimate Sample Kit and get to work.

And really, why wouldn't building with a handmade--and pretty damn realistic--miniature construction set stimulate creativity, hone focus, and give anxious hands an outlet? Forget the spinners and cubes, some Mini Cinder Blocks, a few 2 x 4s, and a container of mortar are the kinds of fidget toys I'm talking about.

Dad can improve his golf SKLZ in the back yard, or the office hallway, with these Impact Golf Balls. Designed to have limited-flight capabilities of 45 yards or less, he can hit these regulation-size SKLZ balls with your normal swing and power, without worrying he'll lose them to the neighbor's car window, or the mailman's head.

The 16 Most Dad Gifts for Dad

With Father's Day coming up in June, and with Dad being all...Dad...about things all the time, I thought a curated list of the most Dad gifts for Dad was in order. And I found 16 winners*...

Another year. Another buying season. Another collection of the best gifts for men. But my collection. My gifts. Well...

Eat like a pig...er, I mean, a man...a man pig (!) with The Man Fork from Clever Donkey. With 50% more tines than the average fork, this 6-pronged piece of silverware will have you spearing steak, scooping stir fries...

Unique Gifts for $50 or Less

Before putting together a list of unique gifts for $50 or less, I spent some time thinking about what the dollar-or-less number should be. How much do people spend on gifts, and on individual gifts, these days? I feel...

Give your suds-lovin' handy man a jolt of joy with one of JoyJolt's tool handle glass beer mugs. Choose from the Crescent Wrench, Screwdriver, Hammer, Combination Wrench, or Pipe Wrench Beer Stein, and let him sip...or...

The Best Father's Day Gifts for $50 or Less

In honor of Father's Day, show your tightwad pops he taught you well with one of these gifts for Dad priced at $50 or less...

The dad joke's on Dad this Father's Day with these 17 silly & funny Father's Day gifts Dad will love. No, I take that back. No joke, just a gag...gift...or two. Some of my picks are cheesy and corny like the man himself...

Thoughtfully says their Smokehouse Ultimate Grilling Spice Set is "inspired by profound flavors from around the world." And while I'll admit that is certainly a statement that seems to have been written...thoughtfully...I...

Show off that dad bod this summer with the #DadCrop, a sexy upgrade to Dad's favorite piece of clothing: the hoodie. The #DadCrop can make dads everywhere look more hip, more fashionable, more Tik-Tok-ready while picking...

It's Not a Dad Bod It's a Father Figure T-Shirt

The It's Not a Dad Bod It's a Father Figure T-shirt is the first T-shirt to bust through (beer belly first, of course) my firewall against cheesy, punny, novelty T-shirts since the IPA Lot When I Drink T-shirt I posted...