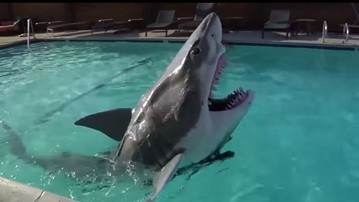 Two events inspired this collection of the best shark themed gifts. The obvious: we're in the middle of Shark Week 2018.

The less expected: I got a haircut a few days ago and my stylist asked me if I've ever watched Jaws after enjoying some herbal refreshments. Why, no Julie, no I have not. Isn't watching scenes of a giant killer shark stalking and eating people alive scary enough without adding an altered, possibly paranoid, state of mind to the mix?

Nevermind the blood and horror, Julie said. The point is that the cinematography in Jaws is exceptional. And some of the film's shots, and especially its ocean and sky colors, will blow your mind and awaken your soul if you take them in after smoking up. Interesting. I've added "Watch Jaws" to my long list of Things to Do When I'm High.

In the meantime, here's something for you to do wherever you are, and in whatever state you're in: check out my picks for the best shark themed gifts.

Note: Shark gift prices are approximate, and listed as they were at printing. Prices are subject to change.

Even though it's been 3 years since Left Shark, uh, I mean Katy Perry, headlined the Super Bowl Halftime Show, the Party Shark Costume will probably continue to make the Halloween and costume party rounds for at least another decade or so. And maybe even after that, once everyone forgets what it originally referred to, because transforming into a squishy upright Jaws never loses its appeal.

Keep your little predator afloat with a foam fin that fits like a backpack. The shark swimming helper has adjustable straps that can fit up to a men's chest size 40! Note: Not to be relied on as a personal floatation device. Or a shark deterrent.

Why eat a chocolate bunny for Easter next year when you can eat...all the chocolate bunnies on earth with a massive chocolate megalodon shark tooth? Muahahaha! These edible and...wait for it...toothsome replicas are molded from the real chompers of the most fearful beast ever to haunt our oceans (yes, even scarier than you, Nessie). At up to 60' in length, the gargantuan sharks shed teeth reaching over 7" long. The fossils choco-paleontologists Fossilera used to shape their tasty teeth are around 4.8" long, and solidified with over 4 ounces of chocolate.

I know you've been looking everywhere for it and now I've found it for you: a way to pimp your KitchenAid. A kit that will make creating cookie dough and kneading bread in your standing mixer look manly and badass. This 30-strong set of decals will transform even the girliest of powder pink and magenta KitchenAids into lean, mean Flying Tiger machines.

Someone must have dumped a couple pina coladas nestled in this shark beverage bar's cup holders down his throat, because all this Jaws is wants to use his gnashing teeth for is to bite down on a big, dopey grin.

From, appropriately, BigMouth, Inc. the Super Chill floating shark cooler and bar is an inflatable raft with cup holders for 7 drinks, and a center ice chest, built in under Great White Smiley's fin. The beverage bar extends over 6-1/2" long from tail fin to lower incisors.

Dunk a piece of your Caterpillar Roll in this sushi plate's wasabi & soy sauce reservoir and you might not get it back. Might be the last you see of your chopsticks...and your fingers...too.

If you're a surfer, swimmer, snorkeler, or kayaker planning to hit the ocean, wearing a Sharkbanz could save the skin on your hide for no skin off your teeth.

Sharkbanz use magnetic technology in their efforts to deter sharks from attacking humans. Since sharks are more likely to use their ultra-sensitive electro-receptors than their eyes to sense their surroundings, the magnetic waves emanating from Sharkbanz help disrupt these receptors, and tell the shark there is nothing of interest for it around - or inside - you.

Not so scary when you're splayed across my coffee table in 20 detachable organs and body parts, are you Jaws? Ow! F- OK, fine. Teeth still sharp in 13" long 4D model. Shark still mildly intimidating.

Just when you thought you could enjoy a glass of beer without having your face bitten off by a shark. First the aggressive sea dwellers infiltrated our coffee mugs, and now it's our cold beverage containers. I hear they're even more surly and belligerent when drunk, so be especially careful when dousing them in Belgian Quads or, worse, Brewmeister's 67.5% ABV Snake Venom.

The smooshy shark or the poofy puppy: I don't know which is more adorable. Can any woman look at this dog without longing to hold it in her arms? Can any man look at this dog bed without contemplating how comfortable it would be as a 360-degree pillow for himself?

The Shark Corn Holders support the cob kind of corn pretty well too. Head and fin pairs skewer the two ends of your cob - or you could go Sharknado mutants and use 2 head or 2 tail ends together - to provide grips as secure as they are deadly.

Turn Shark Week into Shark Every Night of the Year with Emojibator's The Shark. A gift for your girlfriend right up there (er, no pun intended) with the original Eggplant Emojibator, but with a little something for the givers who themselves dig shark themed gifts.

The Great Grey Shark Chair, now that's what I'd call a fantastic beast. As for where to find them, well, it's going to be much easier than tracking down a niffler or a bowtruckle. Just head over to the Reroom UK shop on Etsy, and find the Great Grey Shark there ready to take a bite out of your kid's room...or grown ass man's room...decor.

Warning: The Great Grey Shark Chair will also take a good-sized bite out of your wallet.

And you thought your socks went missing before. Good luck getting any of them back from the Shark Bin. I heard he also likes dirty underwear, and I gotta think Crotchless Yoga Pants are up there too...

Seabreacher water jets snugly seat two people with exceptional control over their stomachs and bowels for a nautical roller coaster ride of dives, breaches, spins, and respective surface and subsurface speeds of up to...

Sharks are scary. Girls are scary. Gaaahhh! It's the worst hybrid ever! To all Dude Facebook readers who expressed sentiments of peeved off at our posting of a Sharkini photo without information about where to throw wads...

Who never wants to sleep again? These bedding sets depicting some of our worst fears and phobias are here to make it happen! Think of them as dreams nightmares come true...

Though not always as deadly as they seem, let's face it, babies are predators. Sharks in sheep's clothing. Seconds away from their next tantrum. Ready. Waiting... to ruin your life. So let's not pretend we like them...

Seabob, an animatronic shark costume visual effects designers VFXLAB recently took for a test swim in the San Bernardino Doubletree Hotel pool, is many things. Funny, a good prank, and a way for my friend Cornelius to...

Surfers, SCUBA divers, mermaids, and baby seals now have a means of deterring the Ultimate Dread. Thwarting the very reason some break a sweat at the mere mention of the ocean. These here grenades contain a highly calibrated...

This shark won't take a bite out of your leg, but get too close and he'll probably lick and hump it. How clever. A shark life preserver for your pooch. He might hate wearing it, but the full-body flotation vest will keep...

Though most people would probably rather get burnt by the sun than bitten by a shark, both injuries are pretty bad these days. Take your pick on which one leads to a slow, tortuous death, or having flesh ripped away from...

Shark Week may delight you only one week a year, but these versatile Shark Pool, Beach & Shower Sandals will bring joy throughout all 52 of them. Wear the unisex sandals to the beach or pool during the summer months...

Land shark! Or at least the scariest part of the shark now available to tear into human flesh on land. Dane Kealoha's shark tooth weapons style themselves after traditional blades and blunt implements with walloping power...