The Best RC Toys for Adults 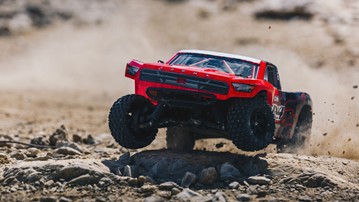 The best RC toys for adults span well beyond remote control cars and drones. In the case of the giant RC Bald Eagle, a full 9-1/2-foot wingspan beyond remote control cars and drones. And, honestly, I'm kind of over drones and all their legalities and takedowns by neighbors with shotguns, so with the exception of a quadcopter from a galaxy far, far away, I've left them off this list.

I've also focused largely on RC toys that are truly meant for adults, not just the ones you buy for your kid, and then sneak in time to play with yourself when he's at little league practice.

With a few of the remote control beasts carrying hundreds-of-dollars price tags, they're also RC toys for adults because no punk ass kid better touch your XO-1 supercar unless he can show you the 8 crisp $100 bills he'll hand over if he breaks it.

Here are my picks for the best RC toys for adults.

Note: RC toy prices are approximate, and listed as they were at printing. Prices are subject to change.

The main gun on the model fires BBs up to 25 meters.

I know. It's just a remote control spider, right? Fun for 5 minutes' worth of scaring Grandma, but otherwise unremarkable. And $950? Is that a joke?

In answer to both questions, No. No it's not.

To see why, click through to Robugtix and watch the T8X Army prepare to overtake civilization. Or, like, perform a group number on World of Dance.

T8X users need only send short, simple commands via their remotes to achieve the types of results depicted in the video. For example, instruct the spider to walk forward at an indicated speed, and the Bigfoot will automatically enact details such as inverse kinematics, leg trajectory planning, leg gait coordination, and motor control. It's a highly advanced system made accessible for anyone to manipulate.

Whether or not this indoor nano quadcopter flies is entirely up to you. I mean up to your skillz. The Crazyflie is an open source DIY kit primed for development and hacking, but its assembly demands proficiency in soldering, and it is not to be confused with a toy. Or a Japanese giant hornet, even though it weighs only 27 grams and buzzes and has some yellow in it and would probably cause a corneal tear if it flew into your eye.

Take your crack at piloting Han Solo's whip. The Star Wars Millennium Falcon Quad is loaded with LED lights and sound effects, with 2.4Ghz communication that lets you control it up to 200' away. What Empire plans will you foil, what booty will you smuggle, and what wives and pets will you annoy with your great ship?

Redcat Racing calls the Tornado EPX PRO a "mini cyclone of muscle." It has a speed regulator and a 3300KV 540 Novatech brushless motor for smooth operation both on and off the track.

0 to 100MPH in under 5 seconds. Yes, I'm talking about an RC car. Traxxas says its XO-1 is the world's fastest ready-to-race supercar. And while you'll pay dearly for the honor, this 1/7-scale ride comes 'Roided. Out.

The XO-1 sports a 25.2V extreme ESC giant brushless motor that accelerate it to 60MPH in 2.3 seconds. (You will have to add on some 3s LiPo batteries to get over the 100MPH mark though.) The car also includes telemetry sensors, a TQi 2.4GHz radio with wireless module, and Traxxas Stability Management for increases control on slippery surfaces.

Arrma's Senton 4x4 Mega arrives big, at a 1/10 scale, bad, with a 12T motor and waterproof electronics for all-terrain driving, and RTR. Ready. To. Rumble.

The RC 4x4 has a Tactic TTX300 transmitter for precise control on your end, and boots Fortress tires for equal traction on the truck's part.

"I wanted the challenging build and I have it. This is a kit and it is not for the impatient." Still want Tamiya's RC Toyota Land Cruiser? "I am an experienced builder and usually it takes about 5 hours to build a RC car kit, but this one took me more like 12-14 hours...." How about now?

Reviews are in, and they are generally very favorable, but as mecha fans will find with the Zoids Highend Master Model Kits, RC car enthusiasts will enjoy (or curse) a demanding payoff with the Tamiya Toyota Land Cruiser. The crawler has a true-to-scale Land Cruiser 40 body made from polycarbonate and set on a CR-01 chassis. 125mm Rock Crawler tires over 3-piece beadlock wheels, plus a 4-ling suspension help handle hairy maneuvers over rugged terrain.

The bald eagle. The symbol of American freedom soaring majestically through the air. It's magical. Stirring. Glorious. It's...uh, it's flying kind of low. It's - holy crap! It's about to T-bone that tree! Cornelius, you ball sack! You told me you knew how to fly remote controlled bald eagles!

The RC bald eagle has a 9-1/2' wingspan that both sails through the wind paying homage to the grace of the real bird in flight, and makes it especially detrimental and messy to clean up when someone who doesn't know what the hell he's doing gets ahold of the controller. Powered by a gimbal-mounted engine and propeller, the eagle is also equipped to make multi-directional vector movements that mirror its living counterpart's turns and dives enough to trick ground gazers they're seeing the real thing showing off overhead.

The 3-gram Carbon Butterfly may not be able to brag that it's faster than a speeding bullet or more powerful than a locomotive, but the living room flyer can say it's lighter than a sheet of paper and way, way more fun and carefree to hang out with than Superman.

The plane has a 7" wingspan, and Plantraco Microflight says it's a piece of cake to learn to fly with figure-8-friendly control in any 12' x 16' room.

Anki Overdrive goes Fast & Furious with its Toretto-tinted edition. If you're not familiar with the Anki gaming family, meet virtual REAL-ality. A simple car racing game in fundamental nature, Anki Overdrive aims to transport the best elements of on-screen speed competitions to a tangible track with tangible cars laid out on your living room floor.

The Fast & Furious edition Anki interface pits competitors driving their choice of Dom's Ice Charger or Hobbs' MXT along a physical track set up at home, against other AI supercars from the movie, visible on a paired iOS or Android mobile device. The real against the virtual, played out both on the floor and the screen in front of you.

A snake in the hand is worth two in the bush. Especially if the snake is this remote control hissing cobra, and the hand is yours, guiding its lifelike, 17" slithering body and retractable tongue toward your friend Cornelius...

When I first read about, but hadn't yet seen, Copter Company's taxidermy animal drones I though they just sounded kinda goofy. Then I got a look at the Orvillecopter here. A spread-eagle taxidermied quad-cat-ter flying...

Whether or not this nano quadcopter flies is entirely up to you. I mean up to your skillz. The Crazyflie is an open source DIY kit primed for development and hacking, but its assembly demands proficiency in soldering...

I know. It's just a remote control spider, right? Fun for 5 minutes' worth of scaring Grandma, but otherwise unremarkable. And $499? Is that a joke?...

Unfortunately, these iPhone-controlled insects cannot fly or crawl up my friend Cornelius' leg and make him die while he's engaged in Advanced Warfare. On screen, obviously. Off screen he would just squeal like the lovechild...

A life-size, remote control foam superhero probably isn't going to be much help if you're looking for someone to swoop in and save your kid from the schoolyard bullies next time they try to weave his body through the...

You probably won't be so bummed to hear that this life-size remote control R2-D2 refrigerator is available only in Japan once you hear that Lucasfilm's Far East minions are charging over $8,000 for it. Oh, and the fridge's...

B - The RC Hybrid Car-Helicopter

I can't fit inside it. That's the primary downside to B, a patent-pending, remote-controlled car-helicopter hybrid capable of plowing along unfriendly terrain and then, when said terrain turns too rugged, lifting off...

Ralph Kayser's 1:1 Scale RC Flying Man is probably a step down from delivery drones in terms of feats of technology, but it sure looks a whole lot cooler to me. The dude is a full-scale human in height and general size...