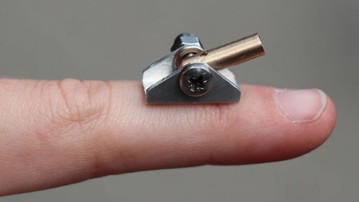 If you want to know about the best projectile launchers, you're probably getting ready to orchestrate a cubicle warfare offensive at work. Or maybe you just need some new catapult- and slingshot-shaped desktop toys. Or a no-fail gift for a man. You'll find all of those projectile launchers here.

You'll also find a sodie can cannon that hooks onto your rifle.

Here are my picks for the best projectile launchers.

Note: Projectile launcher prices are listed as they were at printing. Prices are subject to change.

The most literal projectile launcher you can buy. Perhaps also the most accurate albeit - blech! - with an educational bent. Vernier says kiddos and teens can "Use the Vernier Projectile Launcher to investigate important concepts in two-dimensional kinematics" by launching steel balls at precise angles.

I say grown ass men like me and my friend Cornelius can use the Vernier Projectile Launcher to investigate how many LEGO minifigs we can knock over if we set them up domino-style. The whole LEGO Ferris Bueller cast maybe?

This launcher adjusts between 0 and 70 degrees, and can send its projectiles over distances of over 8'.

Uncommon Carry's mini crossbows and cannons will serve as the foundation for your next cubicle warfare battle, and the key to knocking a class of Yoga Joes out of their down dogs and warrior 3s. The crossbows load with toothpicks, Q-Tips, or matches, while the cannons accept a 2mm or smaller fuse to fire equally mini cannonballs with 3F black gunpowder. Both are made of stainless steel, and come in a few different models.

This desktop warfare weapon comes from the genius mind of Leonardo da Vinci. Now, da Vinci didn't invent the catapult but, as with anything that crazy Medieval MF touched, he did figure out how to make it way better. And I think if high-rise office buildings, contemporary desktops, and floors with dozens of co-workers existed in 1485, da Vinci would have been the Father and Grand Master of cubicle warfare just like he was of painting, architecture, mechanical systems, paleontology, ichnology, and Dan Brown novels.

With this Catapult Kit, you can get a hands-on peek into the Italian stallion's greatness. It includes all 2 dozen+ pre-cut parts needed for assembly, and even the glue because da Vinci wouldn't have been shiesty about selling key components separately like that.

The Can Cannon Soda Can Launcher

Big & Rich recommend ladies save a horse, ride a cowboy, and the Can Cannon recommends cowboys save a bullet, fire a shook-up sodie can.

The Can Cannon attaches to your AR-15 / M16 rifle to provide hours of useless fun launching soda cans, or any other heavy, thin-walled object you've got in your lair. (A Can Cannon Instagram follower said he's used his to fire tennis balls too.)

It contains a proprietary gas ported barrel and pressure tube, both to give projectiles an average range of 105 yards, and to reduce exposure to high pressure gases, which could "detonate" carbonated beverages too soon. Maker X Products says the Can Cannon is 100% legal, and provides a link to their BATF approval letter on its listing page. The design is not considered a Destructive Device or firearm. (Note: The thing you attach your Can Cannon to still is.)

Slap Cap is setting out to make a lot of people slap happy. The trick shot bottle opener will also make you flip, fling, dart, arc, jettison, and smack happy too. Once you've cracked open your brew with the Slap Cap's prying end, place the freed cap on its circular recess, and give it a slap.

Waste baskets, red cups, and backs of heads, you're on alert: brace for impact.

Based on the artillery weapon design used by the Roman Empire, this Ballista Kit comes with all 28 pieces needed to build the tabletop shooter (you'll need to supply the wood glue.) Pieces are laser cut from hardwood, and interlock to assemble. When finished, the ballista stands 8" tall x 4" wide x 6" deep, and can fire its payload over 30', or about from my desk to the left ear of the dude who gave me this paperweight as a Secret Santa gift last year.

Faster than a speeding bullet! Well...not really. But faster than a speeding steel slug firing out of any other slingshot. The Pocket Shot is a next gen slingshot. At least in terms of its rate of fire and multi-projectile versatility. Design-wise it looks like one of the circa 1978 hot water bottles my grandma used to give me alongside my stuffed rabbit when I had the flu chills. However the Pocket Shot's technical achievements, such as its ability to fire anything from .4 cal paintballs to arrows at up to 350 feet per second, wouldn't exist without its antiquated aesthetic. The weapon's circular shape and soft stretchy pouch are what enables shooters to interchange ammo and fire at 2 to 3 times the rate of a standard slingshot.

Peleg Design calls their PenPOW pencil-mounted slingshot "your secret weapon against boredom." And since we all know boredom runs rampant in classrooms and cubicles, we should probably take this opportunity to protect our children and invest in some gifts for the office that will combat the assault.

Sold in 2-packs, the PenPOW is a 2.2" long clip that grips onto any standard pencil. Point its arm downward when it's time to learn long division / write out your taco order so Bob doesn't F it up again during his turn to do the lunch run, and then, when the attack is imminent, turn the graphite-hugging slingshot 180 degrees, think about sucking on a lemon, and get those spitball projectiles ready!

One of a few Quarter Mile Cannon creations, The Bully is their biggest and baddest. Now I'm not suggesting using the spud shooter with a 36"-long, 1-1/2"-diameter barrel against bullies but, I mean, you could come up with that idea on your own.

In addition to its size, The Bully has a boom!-ing discharge and, ohboyohboyohboy, shoots a 4' flame out the end in the process. You can get a tennis ball attachment for Quarter Mile Cannons, but if you use it with The Bully, the company warns you probably won't ever see your tennis ball again.

It's the bottle opener that, after faithfully completing its beer-cracking duties, loads the removed cap in a firing chamber and readies it to transition from carbonation keeper to deadly projectile.

Well, maybe "irksome" is a better descriptor than "deadly".

John Austin's projectile launchers need some real elbow grease behind them to work. Like, you don't just have to learn how to load and fire his Implements of Spitball Warfare you have to learn how to build them from scratch. But, I mean, if you're looking to waste a bunch of time firing spitballs at objects and co-workers, why not first waste some time making apparatuses that are going to do the firing? Think of it as cubicle warfare prefunking.

As much as you love projectiles, I doubt you can argue you love them more than your dog. Give you pup some flying object love with the iFetch, an interactive ball launcher you don't need to be around for your pup to interact with.

iFetch activates only when one of its mini tennis balls rolls through its funnel - presumably, any dog smart enough to hunt down and bring the ball back will be smart enough to figure out how to drop it in the funnel too. After a pause of a few seconds, or enough time for your twinkle-toed pooch to get its jig going, iFetch fires at one of three selectable launch distances. The device either plugs into a standard outlet or functions on 6 "C" batteries for remote use.

Chest bumps, head butts, and sharp kicks to the shins unite! The Human Slingshot is here to bring new meaning to the lead-in, "Guess who I ran into the other day?" The stretchable human projectile band, 4 close friends (or mortal enemies, depending on one's strategy), and an open, somewhat forgiving surface are all that's needed for this game of athletic conditioning, coordination, spatial awareness, balance, and, before the aforementioned are mastered, head-on collisions and wipeouts.

Sorry, I couldn't resist. This is the Shinbari Lube Launcher. XL. In blue. That's seven-and-a-half inches of long and strong silicone jelly (or even, according to one reviewer, organic coconut oil) reservoir ready to facilitate pleasure and alleviate dry spells. Well, the literal ones anyway. Not sure waving a Lube Launcher around like a magic wand at Singles' Night will be cast much of a spell over the ladies.

Sadly, only a prototype that Popcorn Indiana made in 2012, but come on, it's 2018! We should have, like, 8 different models of voice-activated, automatic popcorn kernel launchers to choose from!

The Popinator was designed to fire a kernel of popcorn from its spout to your mouth at the sound of the word Pop! Trajectory is up to 15 feet indoors. Check out the video here.

The Tic Tac Gun takes aim at anyone who's eaten the garlic & cheese bread, or drank a whole pot of coffee this morning, and pelts 'em with fresh breath...

You don't shoot 'em, you don't drop 'em like a bomb, and you definitely don't Goblies them up. Goblies Throwable Paintballs are soft and squishy projectiles that throw like a water balloon, and land in an explosion of...

I'm feeling 4th of July withdrawal. No more fireworks to blow up. But I remember potato guns from grade school, and even a giant homemade potato gun my high school physics teacher made that could shoot entire russets...

Archers, bowhunters, bowfishers, people who like to sling mud get one tool for all their firing needs in The Hammer. This slingshot /slingbow invites sportsmen to practice multiple shooting disciplines using its adjustable...

Rochan-bo you for first go with this gnarly-looking slingshot, Cornelius. Rochan calls their namesake slingshot a "professional outdoor catapult" and launches its description with, "First, this slingshot...is not a toy...

You could wait for Black Friday. Orrrr, you could make today Red & Orange with Accents of White & Black Friday, and get the Nerf N-Strike Mega Mastodon a solid 6 weeks early so you'll have time to test it out yourself...make...

Even though it's scaled to 1/20th of its original size, this historically accurate replica of Edward the First's response to the 1304 siege on his Stirling Castle could still probably catapult most of your neighbors'...

A bowling ball cannon looks like something a dude would buy in an effort to one-up (OK, seven-up) another dude who otherwise has a better car, better house, better, job, better wife...and measly little golf ball cannon...

Having made a whole list of the best projectile launchers, I know a good desktop cannon when I see one. And, dude, this golf ball cannon is one damn fine desktop cannon. Handmade by Butterfield Machine, the Black Powder...

Welp, I sure hope using one of Dead Eye Club's Wishbone EDC Slingshot's doesn't make me the newest member of the Dead Eye Club. I have my doubts, given the opening line in the black-and-yellow stinger's description: "Juuuust...

Radiant Artifacts' Knuckle Slingshot probably won't be catching you dinner or intimidating any bad guys slipped over your Pointer and Tallman fingers, but loaded up with marshmallows or felt balls, the projectile shooter...