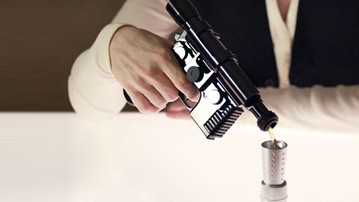 Since Solo: A Star Wars Story sees its first nationwide screenings in theaters tonight, I figured I'd feed the Han mania - the Hania - by looking back at some of the best Han Solo-inspired merch we've seen over the past few years.

Since Han Solo isn't as furry as Chewbacca, or as tech-friendly as R2-D2, as menacing as Darth Vader, or as adorable as Yoda, most of his merchandise centers around his blaster, and that stint he did in Carbonite. I've also included some items that focus on the Millennium Falcon, but left out most general Star Wars gear, as well as merch more specific to other characters.

Alright, here ya go, my picks for the best Han Solo merchandise.

Note: Han Solo merchandise prices are listed as they were at printing. Prices are subject to change.

Paul Bierker is a formally educated designer with a BFA in Jewelry Design and Graphic Design, and a BAMF in handcrafted Star Wars jewelry. He crafts and Force-ifies all pieces himself from his Pittsburgh precious metals lab.

The only thing this Millennium Falcon Asteroid Coffee Table is missing is my feet. The exquisite coffee table's 20.5" Millennium Falcon narrowly slips through a pair of hand-painted urethane and fiberglass asteroid sculptures. It reminds me of Dev and Arnold's attempt to pilot a Fiat through the alleys of Tuscany in Episode 2 of the second season of Master of None. I hope Chewie gives better directions than Dev. The table runs 54" long x 28" wide.

The finished color is a little off, but it's probably safer to put mini Han Solo in Carbonite ice cubes in your drinks than mini Han Solos in actual Carbonite.

Han Solo. You mack. The only lady I could get away with saying, "I know" in response to "I love you" to is my mama.

Anyway, here are some nice pillowcases with the famous Princess Leia / Han Solo "I love you," "I know" quotes from The Empire Strikes Back. I like them because I think women will find them cute and acceptable as gifts, but they still make men seem cool and in control of their lives, rather than like the whipped little Bs they probably are by the time they reach a point in their relationships that they're buying His & Her pillowcases.

Chewie on the inside, Han Solo on the out. I can't lose! This isn't just a hoodie, it's the double-sided definition of awesome. Maybe even the 21st century equivalent of the mullet.

A heavyweight zip-up, the Han-Chewie hoodie sports Solo's Hoth parka on one side, and a full upper body of faux fur on the other. Chewbacca's trademark bandolier hasn't been forgotten either; it's embroidered as an applique across both the front and back of his half.

Frozen in Carbonite and cursed to eat the sweaty hands and feet of down dogs and warrior poses forever! The Han Solo yoga mat is 5mm thick and reversible. In case the sight of Han in distress ruins the rest of the yogis' Zen and you need to flip him over. The mat is also moisture-wicking and non-slip.

The Blaster flask, cleverly titled the Fist Shot, could hold 4.4 ounces of your favorite vodka, tequila, or Corellian whiskey. Its silver muzzle could double as the flask's cap and a 1.5-ounce shot glass for instant aid in taking the galactic edge off. I say "could" because the flask is, so far, a one-off from if Industries.

Not for Sale ➠ if Industries

Here's one Millennium Falcon Luke Skywalker couldn't look at and declare, "What a piece of junk!" Hand carved from white cedar wood, the replica freighter is just as detailed, only slightly less massive, and definitely way more beautiful than the original.

In promoting Nerf's new Star Wars Han Solo Blaster, and the Solo movie they've released it to capitalize on honor, the company notes Han's story begins as he leaves behind his old life, and becomes, "increasingly comfortable traveling with law-benders and scoundrels." Then they suggest your kids will enjoy using the Nerf Han Solo Blaster to pretend they too run with a crowd of law-benders and scoundrels. How inappropriate! What hogwash!

For it is you, and it is me, and it is our fellow grown-ass men who will enjoy using the Nerf Han Solo Blaster to pretend we run with a crowd of law-benders and scoundrels.

This desk went viral when Tom Spina Designs released the images of it a few years ago. It was a one-off, commissioned piece the firm made for a recording artist, who subsequently auctioned it for charity. Yeah, suckage on that, but I mean, it went for almost $10,000. So even if they were selling it, the people who could afford to buy a casting of Han in Carbonite from the original Empire Strikes Back prop, inserted into a custom metal frame, and side-lit to form a super sick workspace, probably do not include you and me.

Han Solo section traces back to a casting from the original prop from the Empire Strikes Back, which we encased in a custom metal frame for the desk, which is supported on custom, lighted â€œcarbonite chamberâ€ panels in the classic Star Wars, the Empire Strikes Back style dot-dash pattern. Weâ€™ve become known for our unique, themed and geeky take on everyday furniture like desks and coffee tables. Mark eventually put the piece up for sale, and auctioned the one-of-a-kind Han Solo desk raising over $10,000 for charity!
Not for Sale ➠ Tom Spina Designs

These Vintage Star Wars Displays began as a personal project for creator Lloyd, himself a Star Wars fan looking for a way to show off his Star Wars collectibles and props. He made 4 to start, 9" x 9" backings with arrangements of screen-used props, set decoration swatches, film location elements, vintage Kenner action figures, Micro Machines, original Topps trading cards, and first-run 35mm film, all set in a 10" shadowbox frame. Then he hung them up. Then other people saw them. And a business was born.

The display above is called "Sighting the Death Star." It contains a vintage Kenner Han Solo and Chewie on the left and right sides, along with some metal sections of the Death Star II. The film strip, a first-run 35mm, shows the Millennium Falcon in action. Additional components include a scaled-down Falcon, a Mos Espa awning swatch, Dune Sea sand, Jabba's sail barge fabric, a Slave Quarters scrap, an original Topps trading card, Princess Leia, and vaporator fragments.

Shirt Battle's NFL-Star Wars Mashup T-Shirts are making me question everything I've ever known! I don't like the Atlanta Falcons, but...the Atlanta Millennium Falcons? And the Pittsburgh Steelers can suck it, but the Pittsburgh Smugglers? Argh! May the Force be with them both.

What took them so long? Although I'd prefer an Augustus Gloop drowning in chocolate bar, Han Solo's plight lends itself nicely to aiding in the fattening of America as well. Jabba The Hutt, although posing no long term...

"I was under the impression it would hold molten carbonite as it states clearly in the title this is a carbonite MOLD and it's very poorly constructed for this purpose. Secondly, it's SMALL. No, you can't put people in...

Han Solo, poor bastard. First Vader froze him in Carbonite, and now fancy French cookware company Le Creuset has cooked him in cast iron. Coming November 1, 2019, to a very tiny part of a galaxy only as far, far away...

I see the Star Wars Millennium Falcon Experience bounce house, and so many ideas come to mind. Who needs a piece de resistance for their kid's Star Wars-themed birthday party? Who needs the ultimate accessory for their...

If you weren't sweating the Dark Side before, one round with Onnit's Star Wars fitness equipment, and I guarantee you'll start. From kettlebell swings to hot yoga, Russian twists to Turkish getups, Onnit is injecting...

Have you been searching for the perfect blueprint light? Me too. And wow. This 16-color LED desk lamp went with the Millennium Falcon as its subject! I thought I was going to be stuck with, like, the White House or some...

I have always felt that Star Wars could use more of two things: skin and spandex. Princess Leia bikinis notwithstanding, I'm sure you agree. Right? Well, ever present to charge forth and fill a gap that never really existed...

Apparently, we're allowed to take aim only at the Dark Side. Sneaky Studios didn't design any of their Star Wars shooting targets with Luke or Han or Yoda behind the bullseye, which in a way cuts out an entire buyer demographic...

Sure it's a cool novelty item to have in your family room or front entryway, plus embodies that which brings you the greatest joy in life (Star Wars), but do you really want to be the type of person who keeps Han Solo...