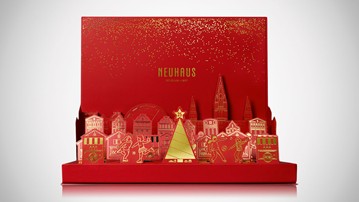 It's only begrudgingly that my compilation of the best Advent calendars includes any that aren't filled with chocolates. Because forget crap plastic toys and dumb erasers straight out of the gum ball machine! For me, the only thing that I can look forward to as much as Christmas itself is a daily nubbin of super special chocolate over the month leading up to it.

In fact, as an adult, I look forward to my Advent calendar edibles even more than Christmas morning. I mean, between what I spend for gifts and what I get these days, I usually end up finishing off the holidays in the red.

Huh. Spend green to go red. I finally understand why those are the colors of Christmas.

Anyway, here are my picks for the best Advent calendars of 2018.

Hot Wheels gets one of my non-chocolate passes in this Advent calendar collection. Maybe you have a kid who can't eat chocolate, or too much sugar. Maybe - gasp! - you have a kid who doesn't like sweets. Or maybe your "kid" is a 35-year-old-man who also goes by son / husband / brother / cousin, and he's trying not to pile on any more calories than the endless holiday dishes, desserts, and booze at parties and family get-togethers are already going to send straight to his belly.

For all of these people, Hot Wheels are not a bad second choice. The calendar has a fold-down lid that doubles as a car track. Inside you'll find windows containing 16 Hot Wheels accessories and 8 full-size decorated Hot Wheels vehicles.

You're gonna pay for it, but there's no arguing that LEGO includes a good chunk of Star Wars swag in their Advent calendar from a galaxy far, far away.

Doors also contain 7 minifigs, including a holiday-themed special. The calendar comes with a foldout playmat with Jakku, star killer base, and deep space play scenes.

Nestle has built a spin on the traditional Advent calendar that doesn't stray too far off the cherished path with their Big Ben clock tower design filled 7 different varieties of peppermint chocolate true to the After Eight line of chocolate-covered gooey fresh breathness.

The After Eight Big Ben Advent Calendar also has a more mature look and chocolate theme, so the adults out there can take pleasure in the Christmas countdown without feeling sheepish. And without settling for the cheap, fake-tasting chocolate brands marketing their calendars to those with less discerning palates might choose.

My last non-chocolate entry on the best Advent calendar list does still contain candy. And if I'd gotten a Haribo gummy version of my pre-Christmas cardboard doors as a kid, I wouldn't have complained.

Coming direct from Germany, the Haribo calendar contains a mixture of fruit and cola-flavored gummies, marshmallows, licorice, and gums.

The Kinder Maxi Mix Advent Calendar comes straight from Germany, with authentic German Kinder chocolates. Including 2 full-size Surprise eggs! The motif on the outside of the box varies with different shipments, but reviews report the product arrives in great shape, and the chocolates inside are kostlich (that's "delicious" in German.)

Germans really love their: 1) chocolate; and 2) Advent calendars. This one from Lindt is also made in Germany, and - spirit of Christmas giving bonus! - it has 31 novelty chocolates inside. Shapes include Santa, a snowman, a seal, and icicle, a penguin, and angel, and a star. Chocolate flavors are milk, white, and hazelnut.

Another decidedly adult-themed entry, Lindt's Dark Advent Calendar isn't for those celebrating the Devil or Darth Vader this holiday season, it's for people who like their chocolate of the non-milky persuasion.

The 24 doors cut out of the calendar's winter scene hold Lindt Noble Bitters and Fine Hearts Chocolate with different fillings and Pralines.

I just ordered Neuhaus' fancy pants take on the Advent calendar for mys- ... uh, my wife, She-Ra: Princess of Power. It hasn't arrived yet, but at $70 it sure as Santa better be an Advent calendar to write the Baby Jesus about.

At least on the outside the calendar's Winter Wonderland pop-up scene is pretty alright. And they say behind those 3D doors lie 25 full-sized Belgian pralines. The combined effect is intended to take you right back to (or right to for the first time for the most of us who have never been before) the Brussels Holiday Markets.

Calendars count down the traditional 24 days leading up to Christmas, with each door rewarding its perforated-cardboard-puncher with a different sample of whisky, scotch, gin, or vodka, depending on which you prefer as your merry maker.

Damn. I didn't buy the CHRONEXT Advent Calendar, filled with over $2.6 million of luxury watches, before December 1. And I feel like if I got it now, I wouldn't be able to do the countdown to Christmas properly, and that...

Advent calendars are making a play for the top Christmas trend of 2019. I've never seen so many available in the US. And I've definitely never seen a 24 Days of Sex & Seduction Advent Calendar in the US, or anywhere else...

"Bonne Maman" translates to "Good ol' Mama," and if my mama got me a 2021 Bonne Maman Fruit Spread & Honey Advent Calendar, I'd tell her she's a good ol' mama indeed...

Your woman sure as shiny baubles won't be singin' out to Santa Baby this year if her Dude Baby gets her one of Tiffany & Co.'s Advent Calendars. Twenty-four days of diamonds and drop earrings, platinum and pendants, and...

Merry pre-Christmas, Dad! Here's a Hazet Santa Tools Advent Calendar stashed with 21 premium tools to help you count down the days 'til Christmas! The day you'll get to use all 21 of those tools to spend hours and hours...

Ho(t), ho(t), ho(t)! The 25 Sauces of Christmas Hot Sauce Advent Calendar is both less and more daunting than appearing on Hot Ones, or putting together your own DIY Hot Sauce Challenge. Less because, as an advent calendar...

Who wants a 1965 Porsche 911 for Christmas? Caveat: you have to assemble it yourself. Over the course of 24 days. And it might not be big enough to sit in and drive when you're done. Still! Nothing can rev up the countdown...

Friends Advent Calendar: The One With the Surprises

What goodies lie behind the doors of the 2020 Friends Advent Calendar: The One With the Surprises? Miniature versions of a gold peephole cover, a turkey wearing sunglasses and a fez you can use as Christmas tree ornaments?...

Geez, and I thought Lindt's chocolate advent calendar was pricey. But I guess no number of dollars is too many dollars when we're talking LEGO, Star Wars, and my present to count down the days to getting even more presents...

One reason not to get too excited about the SystemSix, a desktop piece that uses a retro Macintosh to display a calendar, the weather forecast, and the phase of the moon, is it doesn't use a real old-school Mac. The case...