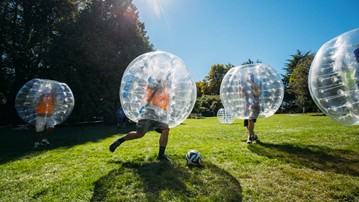 Summer's best backyard games go well beyond croquet and bocce anymore. Not that there's anything wrong with the classics, but when you can elevate the classics to versions that are, say, more neighbor's-window-friendly, glow-in-the-dark, an adorable one-third their standard size, or a wicked 4 times their standard size, a little reinvention is a good thing.

Especially if you want to host the standout BBQ or party of the summer. Start with a backyard dunk tank or an 18' inflatable soccer dartboard, throw in a taco truck parked in the driveway, and load up the Boobs Ice Luge, dudes! This is gonna be one the cops will never forget!

Here are my picks for summer's best backyard games.

Note: Backyard game prices are listed as they were at printing. Prices are subject to change.

ZipChips help make spontaneous acts of recreation part of your EDC. Slip one of these mini flying discs in your pocket and, according to ZipChip, you'll be able to "Zip your Chip for long throws and fast paced action any time, anywhere." Along Food Truck row at lunchtime. In the park after work. And at any field, beach, or backyard on the weekends.

ZipChips measure 2.5" in diameter and weigh 0.7 ounces. While they look like downsized frisbees, ZipChip says your throwing motion should be more like skipping a stone to achieve the best potential flight.

OK, if you don't have a swimming pool in your backyard, you'll have to find someone who does to make this a true backyard game. Or you can unhook yourself from that hangup on semantics, and find a pool, lake or other body of water to enjoy figuring out what the juicy pink-fleshed fruit Watermelon Ball is.

The ball itself isn't a real watermelon, but a lookalike made with a durable vinyl membrane you'll fill with water such that it looks, feels, and floats like its namesake. Gameplay appears to be a bit like rugby. If rugby were played underwater. And with a watermelon.

If this 6' diameter soccer ball were used as the centerpiece of gameplay, the World Cup might elevate itself to a 4 on the 1-to-10 scale of things I'd rather watch than my laptop's screensaver. Let's see you dominate the dribbles and headers now, Brazilians. Someone needs to tell those kids in the photo Rule #1 of the game though: no hands in soccer, you little cheaters. Only feet, chest, and, my personal recommendation, face.

The little plastic men make it look so easy. I'm not sure how much demand there could be out there for an inflatable human foosball arena, but if that's what bounces your house, EZ Inflatables is all set to blow up your good times.

Players on the life-size foosball "table" must hold tight to sliding sheaths covering flexible rods so, as with non-human foosball, they're restricted predominantly to lateral movement during play. Seven-foot walls and enclosed goals are intended to keep the ball, a standard soccer ball from the looks of it in the video, from flying off the field. But you know it's going to happen, like, every third kick anyway. Especially if they let my friend Cornelius the Lead Foot play.

Put a positive spin on the cold reality of interacting with women! Also, just like in the good ol' days of infancy, the Boobs Ice Luge allows thirsty boys (and girls, I guess) to lock lips with a nipple, and feel the nourishment flow. Only difference is, this ice cold rack's mammary duct work spurts out milk that's 80 proof.

The strategy, stealth, and teamwork required for success in capture the flag become even more crucial when you REDUX the game and add...darkness! Capture the Flag REDUX modernizes and incorporates LED lights to the traditional game equipment for a loads-o'-fun nighttime activity for the fam, or a terrific way to keep the party going with friends after the bars close.

This cheaper (albeit in construction as well as price), portable alternative to everyone's favorite Carnie and Zack-sticks-it-to-Mr.-Belding game sets up easily in the backyard for Soak 'N' Wet fun during scorching summer parties and negative windchill dares alike. Take aim with a light vinyl bean bag, try not to throw like a girl, and when you hit the bullseye you'll enjoy 5 quarts of water, or Nickelodeon slime if you've got the skills to cook some up, pouring down onto your sitting duck's head.

Well, they're not polyhedral so these oversized dice probably won't add much to your roleplaying game night, but when the next big backyard Bunco fest or Yahtzee extravaganza rolls around, the giant rollers will have your rolls covered. Snake Eyes Yard Dice are made of solid natural wood chosen for its longevity. And also probably for its non-toxic nature. In preparation for the night one of your drunk friends calls for a hard ten but gets a pair of dice in the fire pit.

Despite their name's suggestion that you'll come up short, Snake Eyes Yard Dice actually sell in packs of 6, stored in a drawstring jute bag for transport. Die measurements are 3-1/2" cubed.

I remember going to this waterslide park called Wet Willy's when I was a kid. They had runs way longer than the Wahii's slide's measly 75'. I bet they were way faster too. But one time on our way home from Wet Willy's my mama got T-boned by a pickup truck and totaled her car. We had to spend a lot of hours in the ER. That kind of sucked. Probably would have been safer to stay in the confines of my backyard, enjoying the slightly less thrilling, but still pretty fun trips down the Wahii. Shorter lines too.

Drugs & alcohol, bullies, gluten - parents have got a lot of evils to worry about as they raise their children these days. So I get why a lot of them are anti-trampoline. Why add flying off a spring-loaded canvas bed and cracking one's skull open to the list of kid concerns?

Because, Daaaaaad, they're so fuuuuuunnnn! Please, pleasepleaseplease can we get one?

Here, Trampolines Down Under has made a move to help parents retain the love and admiration of their children, without relinquishing all control over whether or not those children's bones and brains remain intact. The TDU system features an in-ground retaining wall insert that brings the trampoline top and its bouncy-bouncy good time down to ground level.

Bru-Bag mashes the tools of cornhole with the rules of beer pong. Two-player teams compete to land their bean bags through the holes on opponents' boards, at which point that hole is "filled in" with a wooden disc. Simplistically, the first team to close out all 6 holes on a board wins. However, if you inadvertently knock the disc out of a covered hole on a later throw, that hole becomes live again. And while the opposing team cannot defend their Bru-Bag board via physical contact with it, a bag, or a competitor, they can use any other means necessary to distract the thrower.

Take a volleyball. Shrink it down and tie a patch of its net to a trampoline frame. No, not a big trampoline that your mama says will crack your skull open if you fall off (and for that, see the in-ground trampoline that also made this list) one of those little round ones people use to work out. Now find 3 other athletic, or at least semi-coordinated people, preferably trash talkers who have had too much Red Bull, and split into 2 teams. There. You're ready to play Spikeball.

Socc'er in the bullseye, kid. Set up as a penalty kick-style game on the soccer delivering side, and a massive, 18' segmented scoreboard on the darts receiving end, this backyard party game is all the party I'd need. Any time of the year.

Superfight! instructs us to imagine Cards Against Humanity meets Apples to Apples. For the sake of what comes next, I would add to imagine this meeting takes place in either a dark alley, an octagon, or on opposite ends...