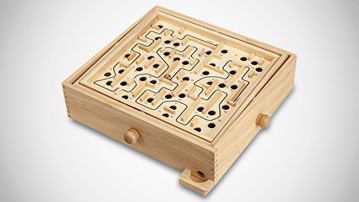 Retro single player games of skill could be anything from the 14th Century cup-and-ball game to the great Frogger of the 1980s. The retro single player games of skill I've chosen for this revue are all physical hand-eye coordination and concentration games - no screens or controllers allowed. Some are especially nostalgic, made only of wood and metal, while others are members of the electronics age, albeit at a pretty basic level.

A 60-hole challenge! That's way more than a golf course, and even a few more than this yearly competition my fraternity ran in college where all the guys tried to...uh...nevermind.

When you're done shooting the shit with your bros and girls on Zoom, try shooting your shot with Shoot the Moon. I used to play this 1940s-era game at my grandma's house, and if I remember correctly, it is much harder than it looks. You gotta open those rods to make the ball move, but you also gotta close them before it falls through. It's a whole open-close, open-close dance all the way down to Pluto. Miss a beat, lose your groove, and you end up getting ditched on Mercury.

I have 3 words. F. This. Game. Whether you are a naturally jittery and unstable person, or as chill as Keanu Reeves, here's my advice: pass right on by this opportunity to introduce, or reintroduce, yourself to a bed of exploding plastic Lucky Charms from Hell.

That said. If you insist on showing off your Perfection skillz, I recommend you level up and play Social Distancing Perfection: before you start the timer, lay out every one of the tray's shapes at least 6 feet apart.

The Retro Magnetic Gyro Wheel Rail Twirler from Schylling is a gimme on the list, because it doesn't require that much skill to have fun and trick out with. I chose it mostly because I needed something to calm me down after all the Perfection trauma of my childhood came rushing back as I wrote that game's entry.

I don't want talk about it.

The best thing about the Retro Magnetic Gyro Wheel Rail Twirler is that it looks like magic in action, yet thanks to the power of magnets, the person creating that action doesn't need to do much to keep in going. The Twirler is suitable for anyone ages 3 and up, and the listing here includes a set of 3 so all the kids get their own.

Or so Dad can show off rolling one 11" Gyro Wheel in each hand, and the third between his toes.

Soooo, the dude in the photo is providing an example of how to lose the Don't Buzz the Wire Game, right?

For those unfamiliar, the goal of Don't Buzz the Wire is to weave the wand through the coiled metal maze without touching it, not to clothesline a piece and drag the whole game off the side of the table Looney Tunes-style.

Bop it! Twist it! Pull it! This might be the hardest retro single player game of all, since it requires today's self-involved, self-important, short-attention-spanned boys and girls both to listen to someone else and follow their directions.

Oooo, da ball's flyin' back at my face. Better punch it again or it's gonna fall! The OODA Ball combines the weight of a medicine ball, with the tactile sensation of a boxing bag, with the bounceback-right-at-your-kisser...

In today's world, The Change Game could mean anything. A TikTok challenge that times who can change from work clothes to sweats the fastest (in honor of and sympathy with those of us returning to our offices.) A bit of...

The Sock Him Stan doorway punching bag gives aspiring boxers, MMA competitors, and people who just like to hit stuff 3 things neither the Boxaball nor the Aqua Training Bag can: 1) the flexibility of installation in any...

If my mama had installed a Ninja Warrior obstacle course in our backyard when I was a kid, she could have saved herself a lot of the yelling and arguments that ensued when she told me to get off the Nintendo and go play...

Aqua Training Bags bring punching and kicking to the masses. The pros too. Whether you're in MMA training or just looking to add boxing to your gym or home fitness routine, this water-filled bag is kind of a genius piece...

Ah, a little Tiki Toss game for me, myself, and I. This hook-and-ring design is sized for the desktop, and freestanding with a wood base to make it easy to set up on the coffee table, bar, or as a toy on your actual WFH...

Your kids can ping - and pong - their friends all day long without ever picking up the cell phone they're too young to have with this Door Pong Game from Fat Brain Toys. The twist on paddleball detaches the ball from...

Sling Puck can teach us a life lesson about compromise, kids. Maybe Mama and Pop told you no firing slingshots in the house. And then when you put down your pellets and Pocket Shot and picked up your puck and stick, they...