Presenting the Alphabet: 17 Gifts that Start with N 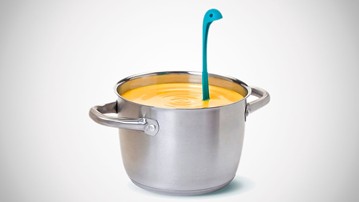 My mama on the other hand, nnnyes, please!

Note: All alphabet gifts are priced as they were at printing on November 23, 2022. Pricing, and availability, are subject to change.

Never Gonna Give You Up Rick Roll QR Code Sticker

I tried it. Works. Though the Never Gonna Give You Up Rick Roll QR Code Sticker doesn't just immediately start blasting Rick Astley's iconic earworm and ultimate prank song. It takes the QR code scanner to the video on YouTube. And depending on their subscription status with the streaming service, they'll might be forced to watch a 5- to 15-second ad before it starts, but will still see the video's title below it, thus completely ruining the joke.

So, yeah, nice idea, Never Gonna Give You Up Rick Roll QR Code Sticker. But thanks to corporate America, poor execution.

No, wait, that's a dark path to travel down, and truly not where I want to lead you in discussing NReal Air AR Glasses, which are actually all about the light. Light in the form of technicolor, cinema-grade viewing experiences with their 130" Full HD display in Air Casting Mode, or 201" Full HD display and real world augmentations in Air AR Space mode.

Catch some waves on the water, and then some more waves on your dinner with the Napoleon TravelQ Portable Gas Grill. Sized for taking to the beach, the park, the campsite, or the tailgate, this Mini-Me of Napoleon's grill line is still able to 'cue up 10,500 BTUs over 225 square inches of grilling space, and cook up to 14 hamburgers at once. All on the company's distinctive porcelain-coated cast iron WAVE grates, so no seared piece of meat, fish, or vegetable forgets where it came from.

Now here's a new spin on smart lighting. Lasermad says their stellar Nixie Chessboard is the first and only Nixie tube-powered chessboard in the whole world, and I believe it. Who has the creativity to even come up with that as an idea, much less figure out how to build it and make it work? With no plugs. Whether you checkmate or not, you'll always light it up in this game of chess.

I think this natural peanut butter mixer that attaches to your power drill is called NutBustir because NutBuster was already taken by a locking tune stabilizing system for guitars. And also, every Karen out there.

What's in a name though? That which we'd call a NustBuster, but due to trademark regulations have to call a NutBustir instead, will still attach to your drill, stir your separated nut butters with 12 to 18 volts of force, and eliminate the mess and sore forearms you'd experience doing it manually.

In addition to electric power drills, the NutBustir...oh wait. I just realized they called it NutBustir on purpose, not as a consolation prize. It's NutBustir, an attachment that busts the hassle of reincorporating nut solids with their oils by stirring them for you. OK, good on you, clever NutBustir namers.

Although a bit strange, Krystyna Dulinska's nose warmers are also a bit adorable. Especially the ones she crochets into animals, such as tigers and koalas and, my favorite, the sheep. Two wood stick thumbs up for the snowman-style carrot nose warmer too.

I'm not a daily downer of hard boiled eggs, but I agree that when I do eat them, they're almost always a giant pain in the egg to peel. I've heard there are tricks to it - drench them in an ice bath as soon as they're finished, add baking soda to the water before boiling, use old eggs - but if the NEGG works as advertised, I'd much, much rather put my cooked unfertilized chickie in a screw-top container with some water and shake, shakeshake, sha-shake it peeled.

If my mama had installed a Ninja Warrior obstacle course in our backyard when I was a kid, she could have saved herself a lot of the yelling and arguments that ensued when she told me to get off the Nintendo and go play outside. A slackline with a bevy of swinging, dangling, and climbing attachments? That would have been like a real life Nintendo game, and probably even more fun to play. I would have gladly gotten the hell-bound devil child out of her hair if I had a Ninja Warrior obstacle course awaiting me out back instead of torn-up Slip 'N Slide and the neighbor's fat cat, Willard.

When the clock strikes the hour in the world of The Nightmare Before Christmas it's not a little bird that pops out to tweet Cuckoo! but a little Zero ghost-dog that pops out to the tune of "This Is Halloween." Like the Return of the Jedi Wall Clock, this whimsical, hand-painted Nightmare Before Christmas Cuckoo Clock is a fantastical and fantastic piece of functional art that adult Tim Burton fans and Halloween fanatics shouldn't feel a bit bad about coveting. The clock's seller, The Bradford Exchange, even points out that "This fine home decor is not intended for children."

NakeFit stick-on shoes - or, to be more precise, NakeFit hypoallergenic adhesive pads - remind me of when I'm walking barefoot and start to feel like something's stuck to my heel, but I'm loath to look down because I just know it's going to be someone's dirty old Band-Aid. Except with NakeFits the thing stuck to my foot would be supposed to be there. It would also be helping to protect me from the dirty old Band-Aids in my path, along with any sharp objects and fungal infections looking to latch on to my feet too.

The NautBoard is dolphin to the power of jet ski. This twin-peaked towable ties up to your favorite motored vessel just like a raft or water ski rope, but rather than zipping you along well above the water's surface as you hold on tight, the NautBoard gives you the option to drop under during the ride. You'll glide like the fastest of our fish and marine mammal friends, no suits, fins, or sea creature anatomy required.

This briefcase is smokin' hot! The NOMAD grill & smoker packs a charcoal BBQ grill and smoker into a pretty decent lookin', and ultra-portable 20.5" x 13.5" x 9.5" case. Open the carrier up to expose 425 square inches of cooking space, enough for around 15 burgers per side.

She waits. She lurks. She stalks. And then suddenly, out of the depths of my 8-quart stock pot, Nessie emerges. Oh the terror! The foreboding doom! The...hey, what's the Loch Ness Monster got in tow there? Is that a ladle full of my mama's spicy chipotle beef and bean chili? Mmmmm, maybe Scottish lake monsters aren't so bad after all. This one even has cute little eyes and skin a very pleasing color of blue.

The Night Owl's all-glass optics consist of objective and ocular lenses encased within an impact-resistant molded thermoplastic housing. The monocular has a single solid focusing ring and can be operated one-handed for 5x magnification and 500x light amplification. Its built-in columnated infrared illuminator is suitable for use in complete darkness, as well as to improve target (i.e., toilet bowl center) recognition in any environment. The model XM50 monocular has a 12.5-degree angular field of view and a 44' wide field of view at a distance of 200'. Lens diameter is 50 mm.

Trade kissing for Hi-yah!-ing to make it better with these most excellent Ninja Bandages. Which are most definitely not just for kids.

The shinobi way of covering cuts and scrapes comes from GAMAGO, here in boxes of 18. Ninja Bandages measure 1.75" x 2", and are suitable for shielding, obscuring, and demolishing anyone who comes near your minor injuries.

Now you too can enjoy the spoils of fame and have your face dropped onto an old world portrait of a king, queen, emperor, clergyman, knight, solider, or naked lady. Nobilified artists can paint your own face onto an existing neck in their vast collection of classic art, and deliver you an old world portrait of thine own self. Hey, it's not so much of a stretch, right? If you had been alive during the reign of China's Qing Dyansty, you would have been emperor anyway.

Novatropes are abstract flower, sealife, and geometric sculptures that get moody when placed over a base with a built-in strobe light. The combination of the moving LED light, a rotating base, and translucent 3D-printed designs create stunning optical illusions of soothing and mesmerizing movement.

A flower looks like it's blooming again and again. A piece of coral or tentacled creature appears to sway in the ocean current. An MC Escher-style painting comes to life.

Dude's Must See Products for January 2023

Oh, man, has the Dude got some approved gifts for you. Not just a dozen, and not just two dozen of them...oh, wait. How many is two dozen? 24? Right, then. The Dude has exactly two dozen approved gift ideas for men this...

Presenting the Alphabet: Gifts from A to Z

My Presenting the Alphabet series has concluded. With, if I may toot mine own horn, all 26 letters accounted for. Even Q. Even X. And over 300 gifts to choose from. Hell, it might be over 500. From A to Z, it's probably...

Presenting the Alphabet: 14 Gifts that Start with Z

My dudes, my ladies, we have reached Z end. Welcome to the Z gifts, and to the zen of this Dude, happy to be done with this little A(-to-Z)dventure...

The 16 unique & quirky gifts are not one of a kind, but they're still unique in their ability to delight, excite, and stand out from the pile of gifts your favorite nephew will receive from all his other relatives, or...

Presenting the Alphabet: 12 Gifts that Start with X

X marks the spot. The 24th spot in the alphabet, and the letter I was most concerned I'd be able to represent in my presentation of alphabetical gifts. But finding X gifts proved not to be all that difficult after all...

Dude's 2022 Holiday Gift Guides mimic the days of Christmas this year - you know, there are 12 of them, dudes. Most are your standard fare of Gifts for Men, Gifts for Women, Gifts for Dad, Gifts for Mom, Stocking Stuffers...

Here's some stuff for stuffing in ladies' stockings. And don't worry, none of it is a severed leg. ... Ha! Haha! The Dude made a Dad joke! The corny, slightly off-color, and borderline nonsensical kind. The best kind!...

Presenting the Alphabet: 21 Gifts that Start with W

Who, what, where, when, why? The Dude. 21 gifts that start with W. Here. Now. Because that's the letter we've reached in my journey of alphabetic gift gift-giving...