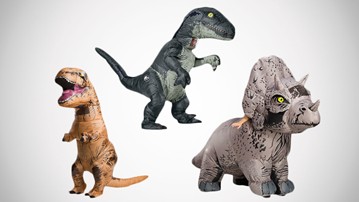 Forget Halloween, these Jurassic World air-blown dinosaur costumes are #1 on my summer shopping list. T-Rex for the Jurassic World 2 release. Triceratops for San Diego Comic-Con. Blue the Velociraptor to surprise my fiancee with Cretaceous Period role playing games when she gets home from work!

There are 3 inflatable dino costumes from the Jurassic series. And the best part: they're not recommended for children! It's all about the Grown Ass T-man-osaurus Rex, baby! Rrrawwwrrr!

You have some T-Rex decisions to make: do you want the costume with a built-in sound box in the gloves, or do you want to make your own Tyrannosaurus sounds? This fan-and-battery-operated suit comes in both versions.

The T-Rex costume has an inseam of less than 33", which should fit adults up to 6' tall, with a 42 to 44 chest an 34 to 36 inseam. There's a vision window at the neck of the dinosaur so you can see all the havoc you're wreaking, and stuff you're getting yelled at for stomping on or knocking over, while wearing it.

"Top o' the mornin' to ye!" says Blue the Velociraptor. Not because the Jurassic World: Fallen Kingdom star is Irish, but because seeing you has put him in an especially good mood. He's about to have a mighty fine lunch!

The velociraptor air-blown costume is powered by 4 x AA batteries driving its fan's motor. When wearing it inflated, you'll stand 84" tall s 24" wide at the shoulders. Your tail will bob along 33" behind you.

Hmmm. Triceratops here looks more like a waddler than an imposer of fear and doom. Sure he's got 3 big horns, but even all of them together don't rival that dino-derriere. Also, Triceratops is kind of adorable, and I feel like if I'm going to wear a giant, blow-up dinosaur costume for my own amusement, my goal should be to make little kids cry, not want to pet me and ride on my back.

I wouldn't have named it the Dinosaur Hanukkah Menorah. I would have called it the T-Rex Dinosorah. But, I don't work for Zion Judaica Ltd, and I'm not "Margarita," the person who designed this cretaceous candle holder...

Aelfric Eden calls their Dinosaur Sherpa Coat a "women's" zip-up, and would probably tout it as a gift for a teen girl, but...come on hip young adult street clothing brand! A 40-something dude could rock it too, right?...

Sometimes babies are born with disproportionately large body parts, which they subsequently grow into. Like dog paws and human eyes. No such luck for the baby T-Rex. Looks as if those little guys are stuck with midget...

So, the dinosaur foot of this Dinosaur Foot Waste Basket from Regal Robot is huge. Maybe even life-size, depending on which dinosaur they've taxidermied to make the trash can. But the actual garbage container, the liner...

It's not an oompa loompa, but a portable plaque of specimens ranging from a thread of circa 350 BC Egyptian mummy wrap to a sliver of T-Rex tooth is still rad enough for me to whine, "Mama! I want a Mini Museum! I want...